Top attractions in Egypt: From temples to beaches 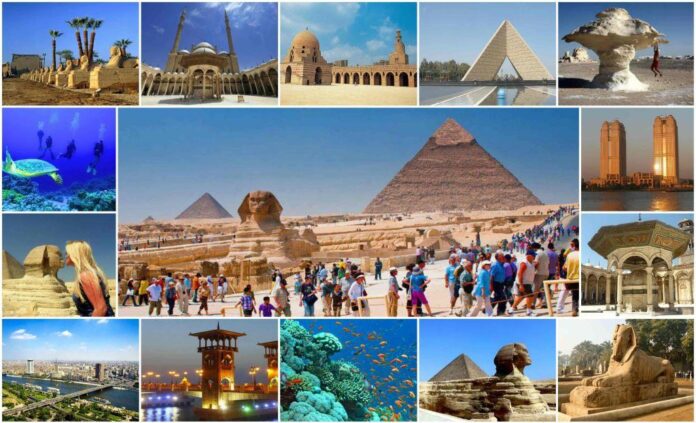 Top attractions in Egypt: Let’s be honest, we all really want to go to rest on the sea. And preferably abroad. 2020 opened up the stunning expanses of our homeland for us, but travel lovers are already yearning to go through passport control.

However, quite recently, as if having heard the prayers of tourists, the presidents of Russia and Egypt, Vladimir Putin and Abdul-Fattah al-Sisi, agreed on the full resumption of flights between the countries, including direct flights to the resort cities of Hurghada and Sharm el-Sheikh.

We tell you what to do in an overseas country for those who have already forgotten what tourism is like outside of India.

You can’t just start talking about the sights of Egypt without mentioning the pyramids. These ancient buildings attract the attention of millions of tourists (although their flow has noticeably decreased due to the lockdown).

The Pyramid of Cheops, the largest of the three, is the only wonder of the world that has survived to this day. Its sides, like the sides of other pyramids, are precisely oriented to the north, south, west, and east, although at the time of the construction of the structures, the Egyptians did not have a compass.

Not impressed yet? Then you definitely need to see them with your own eyes. We advise you to go to Giza as soon as possible because every year the pyramids sink more and more into the sand.

The incredible statue of a lion with a human face is sometimes called the Father of Horror because earlier the structure was used for sacrifices and executions.

Being next to the pyramids, the Sphinx, as it were, guards them and looks quite menacing. It is definitely impossible to miss such a spectacle, therefore, when visiting the tombs of the pharaohs, be sure to drop in on a visit to this ancient mythological creature.

You may even be able to unravel his secret.

In addition to the stunning pyramids and sphinxes, there are many religious buildings in Egypt that amaze with their incredible appearance. Among them, the temple of Pharaoh Ramses II in Abu Simbel deserves special attention.

Giant statues of the Pharaoh and his wife Nefertari, carved into the rock, guard the entrance to the sanctuary. It is designed so that twice a year (February 22 and October 22), a ray of the sun penetrates inside and illuminates the statues of the gods who patronized the pharaoh.

The national flavor of the country must be learned through communication with people. The fastest way to do this, of course, is on the market.

The bazaar is located in the historical center of the capital, where its counters are full of bright colors and fill the space with rich smells. Here you can buy whatever your heart desires: Bedouin jewelry, manuscripts, lamps, aromatic oils, and much more.

Of the modern buildings, we recommend visiting the Alexandrina Library, which is located on the supposed site of an ancient book depository that was destroyed many centuries ago. Once upon a time, an incredible literary fund of the pre-Christian era was collected here.

In the complex, you can visit several museums about the country’s history and culture, as well as a cinema. But the main thing is the reading room, which can accommodate 2,000 people. Perhaps you will not understand anything in books in Arabic, but you will definitely feel the thirst for knowledge.

For spiritual enlightenment and study of Christian history, go to one of the main pilgrimage sites in the country. On Mount Sinai, God appeared to Moses, who was leading his people from Egypt to Israel and transmitted the Ten Commandments.

It is better to climb the mountain in the morning to meet the sunrise on the road and not get under the scorching sun. At the top, you can visit the church and drink cool wine.

Those who do not like to walk through the ruins, but prefer to bask in the sun with a cocktail in one hand and ice cream in the other, should go to one of the most famous resorts in Egypt. The city is imbued with a youthful atmosphere: bars, music, songs, and dances are everywhere.

The fun is in the air!

Warm sand and beautiful views await tourists on the Big Giftun Island. The water here is so clear that between the corals you can see the marlin – the clownfish from the movie Finding Nemo!

Meanwhile, ashore, visitors can enjoy a fresh fruit smoothie while lying in the shade of one of the local bungalows.