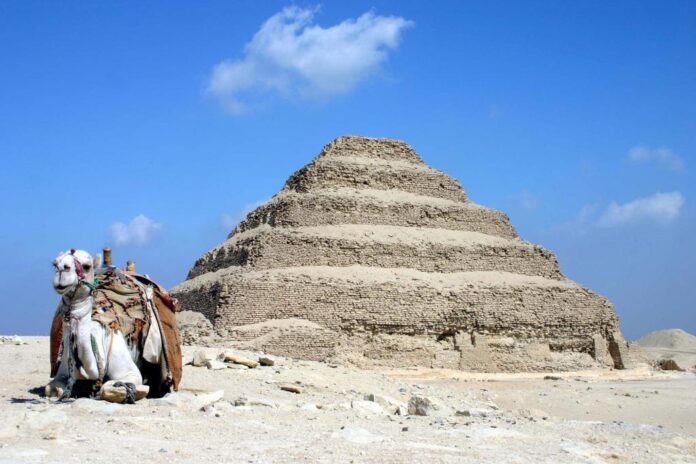 Head south of Cairo towards the modern town of Mit Rahina and you will soon find yourself in Saqqara, the vast necropolis of the Ancient Egyptian city of Memphis. Used as a royal burial place for more than 3,000 years from the First Dynasty onwards, the Saqqara necropolis covers an extensive area of over 4 square miles. The necropolis is part of the UNESCO World Heritage Site Pyramid Fields that extend from Giza to Dashur, and at its heart lies the Pyramid of Djoser. Constructed in the 27th century B.C., it is the oldest pyramid in Egypt and the world’s first monumental stone-cut structure. While the Pyramid of Djoser inspired the iconic smooth-sided pyramids of later dynasties, the Step Pyramid (as it is also called) stands out for its unique tiered appearance.

The Pyramid of Djoser was built roughly 4,700 years ago during the Third Dynasty of the Egyptian Old Kingdom. It was commissioned by Djoser himself to serve as his final burial place, and the design is attributed to his vizier, Imhotep. Imhotep’s architectural plans were both ambitious and completely original. In the past, royal tombs consisted of a subterranean room marked by a mastaba (a rectangular, flat-topped structure with inward sloping sides) made of mud brick. Djoser’s pyramid stacked six mastabas of decreasing size on top of one another to create a pyramid shape that stood 203 feet tall. Instead of mud brick, it was constructed out of hewn rock and encased in shining white limestone.

Beneath the pyramid lies a labyrinth of tunnels and chambers measuring more than 3 miles long. Amongst them is a funerary apartment meant to mimic the layout of Djoser’s palatial living quarters, providing him with a familiar space in which to live out the afterlife; as well as burial spaces possibly meant for his royal harem. Djoser’s own burial chamber was sealed after his death; the pyramid was nevertheless looted extensively in ancient times and his body has never been recovered. The pyramid lies at the center of a larger funerary complex that includes courtyards, satellite tombs, and shrines. In its heyday, the entire complex would have been encircled by 5,400 feet of paneled limestone walls.

Djoser’s pyramid and many other treasures of the Saqqara necropolis were primarily excavated and partially restored by French architect Jean-Philippe Lauer in the 20th century.

Modern visitors enter Djoser’s funerary complex in the southeastern corner, where part of the original limestone wall has been rebuilt. Access is granted via a colonnaded corridor, supported by 40 pillars carved to resemble bundles of palm and papyrus. This grand entryway leads into the Great South Court via one of the original 14 doorways built to allow the pharaoh’s spirit to come and go at will. The Great South Court is a vast open space on the south side of the pyramid. In the middle, two markers denote the route of the ritual race that the pharaoh would have completed as part of Heb-Sed festivities during his lifetime. The purpose of the festival was to prove the king’s continued vitality and fitness to rule.

The Heb-Sed is also immortalized in the Heb-Sed Court on the eastern side of the pyramid, where wall reliefs and paintings provide the foundation for much of what we know about these ritualistic jubilee celebrations. Other structures of particular interest within the complex include the South Tomb (a funerary chapel decorated with blue faience tiles and reliefs depicting scenes from the pharaoh’s life); and the Houses of the South and North Court. The latter is thought to have served as the primary shrines of Upper and Lower Egypt and would have acted as a symbol of the country’s unity. Look out for one of the world’s earliest known examples of tourist graffiti on the walls of the House of the South Court, left by a treasury scribe in 1232 B.C.

Directly in front of the pyramid lies the Serdab, where a lifelike statue of Djoser is enclosed in a wooden box. You can catch a glimpse of the pharaoh lying there through holes drilled into the box wall; although the statue is a replica of the original which is now on display at the Egyptian Museum in Cairo. Other treasures from the Pyramid of Djoser and the wider Saqqara necropolis can be seen on-site at the Imhotep Museum. Highlights include blue faience tiles from inside Djoser’s pyramid, the wooden coffin of Imhotep himself, and the mummy of Merrenre I. Dating back to 2292 B.C., this is the oldest complete royal mummy in existence.

Up until recently, the interior of the pyramid was off-limits to the public for safety reasons (after millennia of weathering and an earthquake in 1992, authorities considered it to be unstable). In March 2020 however, the network of tunnels and chambers was reopened following a restoration project that took 14 years and cost $6.6 million to complete. The project rebuilt collapsed walls and ceilings, fortified corridors to make them structurally safe, added modern lighting, and restored Djoser’s burial chamber. Today, visitors can have the surreal experience of venturing deep inside the pyramid to discover its secrets for themselves.

The Saqqara necropolis is located just under an hour’s drive south of downtown Cairo. It is pretty much the same distance from Giza, where Egypt’s most famous pyramid complex is found. Public transport is limited so if you want to travel independently and don’t have your own vehicle, consider hiring the services of a taxi driver for the day. Your hotel should be able to arrange this for you and to help you negotiate a fair price. Alternatively, the easiest and arguably most rewarding way to visit is to join a tour led by a professional Egyptologist guide. There are plenty of options from Cairo, including private and small-group tours, and tours that last for a half or full day. Full-day tours typically incorporate a visit to Dahshur (another royal necropolis with a collection of well-preserved pyramids), Memphis, and/or Giza.

Cairo and its surrounding pyramid fields can be visited all year round. However, summers can be unbearably hot and humid, with average temperatures of between 86 and 95 degrees F (30 and 35 degrees C) from June to August. Spring sees cooler temperatures but is often characterized by strong winds that can bring sandstorms in open areas like Saqqara. Winter is milder still but can get crowded and expensive since it’s peak travel time for both local and overseas tourists. Therefore, the best time to travel is in the fall (September to November) when the weather is warm and pleasant, there are fewer crowds, and you may be able to get discounted rates on Cairo accommodation and tours, especially during the week.