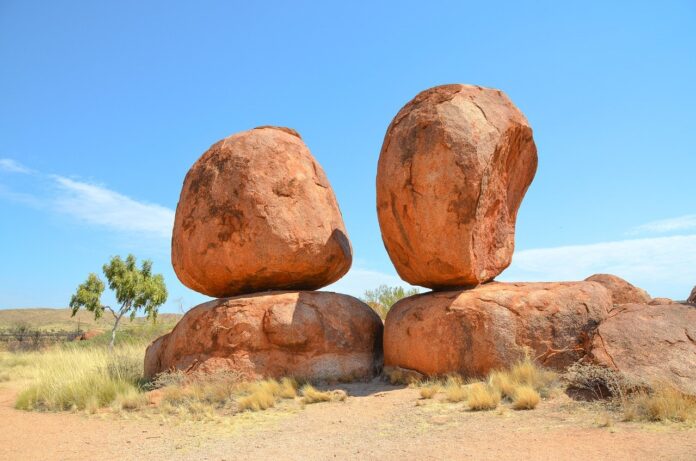 In Australia, there is a unique nature reserve with the unusual name “Devil’s Marbles” ( on the map ). On a wide plain, huge granite stones are randomly “scattered”, which impress with their gigantic size and unusual shapes. Some of them reach 6 meters in diameter. The simple and uncluttered landscape is constantly changing. It looks especially amazing at sunrise and sunset. As the lighting changes, the boulders begin to “glow”, and their color changes from pale pink to crimson red. Australian Devils Marbles.

According to scientific hypotheses, the age of these stones is several million years. From the cooling magma coming out to the surface of the earth, granite was gradually formed, and soft sandstone was located on top of it, which over time was exposed to erosion and settled, and granite, on the contrary, came out to the surface. The main reason for the cracking of the stones was the sharp changes in temperature, which forced the rock to repeatedly contract and expand.

The Australian aborigines call these lands “Karl-Karl”, which literally translates as “round boulders”. They consider this place sacred and believe that the devil himself once visited it. According to legend, it was during a walk in this valley that the devil weaved his headband, which is required for all men who have undergone the rite of initiation. True, during this action, he dropped several of his hair, which fell to the ground and turned into red stones. However, as the natives themselves say, this “fairy tale” about the origin of granite Marble was invented especially for strangers. The truth is kept secret and only the true owners of these lands can know it.

The aborigines of the Kaiteti tribe have their own version explaining the origin of the boulders. They believe that the stones are the eggs of the rainbow snake, the progenitor of humanity and all living things.

Despite differing hypotheses for the appearance of giant boulders, all Aboriginal tribes revere this place and consider it sacred. Any encroachment on him is considered sacrilege. In the mid-20th century, authorities in the nearby town of Alice Spring removed one of the boulders and installed it as part of a memorial to John Flint. Since the officials did not notify the tribal elders of their actions, a scandal erupted, and already in the 90s of the XX century, they had to return the stone to its place. After this incident, the reserve remains inviolable.

Currently, the aborigines are the legal owners of the reserve. They received this right in 2008 and at the same time transferred the land for lease to the Australian Park Service for a period of 99 years. Now the park is under the control of two parties at once: the government and the indigenous people.

The reserve “Devil’s Marbles” is under the special protection of the state. Tourists are not brought here, so you have to make the trip yourself. However, every year from May to October, interesting “live” programs are organized here, which include acquaintance with the park, as well as with the history, culture, traditions, and life of the indigenous Australian aborigines. Many people come here with an overnight stay and stay in a comfortable enough camping to take a break from the bustle of the city. These places are also loved by photographers who are ready to wait for hours to take unique pictures. The reserve is located 115 kilometers from the city of Tennant Creek. There is a small regional airport here. There are no direct flights from Russia to this city, so the easiest way to get to the reserve is with a transfer to the city of Darwin.

Q. Where are the devil’s marbles?

A – The Karlu Karlu/Devil’s Marbles Conservation Reserve is a protected area in the Northern Territory of Australia, approximately 105 km (65 mi) south of Tennant Creek and 393 km (244 mi) north of Alice Springs in the area of ​​Warumungu.

A – The Devil’s Marbles are of great cultural and spiritual importance to the land’s traditional Aboriginal owners (RI), and the reserve protects one of the world’s oldest religious sites, as well as the natural rock formations, found there.

A – Karlu Karlu is a local tribal word that translates to around boulders. The term Devil’s Marbles comes from the Scottish-Australian explorer John Ross, who in 1870 led a team surveying the area for the Overland Telegraph Line. He said: “This is the land of Satan; even he has emptied his bag of marbles around that place.”

Q. Is it safe to camp in Devil’s Marbles?

A – Devil’s Marbles is a great place to camp and my family often does it when going up or down the track. It can get very hot on summer nights, although the heat is reabsorbed from the rocks. Wake up early and take some stunning, soft orange light photos that will impress anyone.

Q. Where are Devils Marbles in Australia?

A – One of the most impressive geological wonders of the Northern Territory, the Devil’s Marbles can be found not far from Uluru. These impressive granite boulders surround a vast canyon about 100 kilometers south of Tennant Creek.

Q. What can you do in Devil’s Marbles?

A – The fascinating geological wonder can be explored via a short self-guided walkway with informative signage. The Karlu Karlu/Devil’s Marbles Conservation Reserve offers a beautiful bush camping area with a fire burning. Stay the night to make sure you’re there at sunset, the most dramatic time to experience the area.

Q. Can you live near Devil’s Marbles?

Q. How are Devils Marbles Protected?

A – Northern Territory law preserves them as a registered holy site. The area was returned to the care of the traditional owner in a historic ceremony in 2008. Devils Marbles is open to the public every day of the year.