Underwater Museums: 6 Amazing In The World 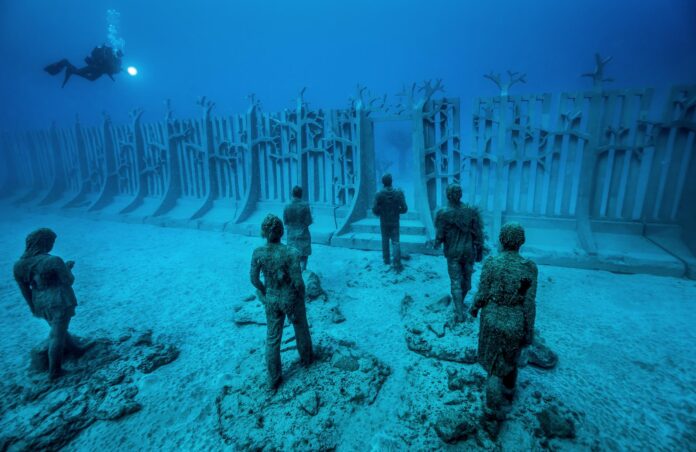 Do you like the most unusual places? Then admire the beauty of the museums located at the bottom of the sea! We have already told you about amazing underwater cities, about the most beautiful corners of the planet with surreal landscapes . And today we propose to explore the archaeological ruins, as well as works of modern art that can be seen only in these underwater museums.

Most people have heard of Pompeii, an infamous Roman city near Naples, at least once. Few people know about Bayeux, which was about three times larger than Pompeii. While Pompeii was covered in volcanic ash after a powerful volcanic eruption, Baia was abandoned in the 8th century and then flooded with water. Today this amazing city can be thoroughly explored by divers and divers.

Just a few kilometers north of Naples (near the fishing town of Pozzuoli), tourists can visit the Baia Underwater Park. Once the city was a luxurious seaside resort for wealthy Romans, even the capricious emperor Caligula loved to spend idle days here from the affairs of the ruler. Since Bahia was considered a nook for the elite of high society, historians today call it the ancient analogue of Las Vegas or Beverly Hills. On clear and fair summer days, visitors to the park can take a glass-bottom boat trip to see the ruins of an ancient civilization. There are also scuba excursions, but the best experience is when you dive into the waves with snorkeling equipment. Under the guidance of a local instructor, you will be able to swim between the marble sculptures and touch the mosaic floors.

The reason this corner of Israel is called Herod’s harbor is because Caesarea was built by Herod on the ruins of an ancient Phoenician city called the Tower of Strato. Josephus Flavius, a Romano-Jewish scholar, described the construction of a port in the “Jewish Wars”. This is a unique place for those who are interested in the history of antiquity. The city of Caesarea in Israel has been the center of many excavations over the past half century. In 2006, on the site of ancient Caesarea (in the vicinity of the Lower Palace of King Herod the Great), the so-called “Herod’s Harbor” was opened as an underwater museum dedicated to one of the largest ports of the Roman Empire, which remained active until 10 BC.

Tourists will find a fascinating promenade from exhibition to exhibition. The curious gaze of travelers will have a view of the destroyed lighthouse, the original foundations, anchors and pedestals. There are 36 different signposts along the four marked trails of the sunken harbor. Visitors are also issued a waterproof card. One route is available for snorkelling enthusiasts, while the rest are for beginner divers.

A stunning museum in Cancun is called a beautiful word – MUSA, which is a short abbreviation for the full name of the institution. Museo Subacuático de Arte (MUSA) literally translates as “Underwater Museum of Art”. And if you have been suffering from the torment of creativity for a long time, then one of the muses will definitely visit you here, because after seeing the beauties, you just want to create some kind of masterpiece – a picture or a book on a marine theme. This underwater museum of modern art has over 500 permanent monumental sculptures resting in the waters surrounding Cancun (in the Isla Mujeres and Punta Nizuc area).

The goal of the museum organizers is to demonstrate the interaction of art and science, as well as to create a reef structure for the colonization of marine life. All artwork is attached to the seabed and made from special materials that will help coral develop. And this is great, because corals are not a trinket and a souvenir for tourists, but an important component in the cycle of life of the inhabitants of the oceans and seas. Visitors can see the art while snorkeling and diving, or on excursions in glass bottom boats. An important part of the MUSA program is to distract at least some of the 750,000 divers (who come to the Yucatan Peninsula every year) away from natural coral reefs, which curious tourists mercilessly destroy, tearing off pieces of coral for memory. Incidentally, this is a matter of jurisdiction. For such a trick, the authorities of some states may impose an impressive fine and even ban them from coming back to the country. So we do not recommend destroying coral reefs.

Underwater Museum Atlántico Lanzarote (Museo Atlántico Lanzarote) was opened not so long ago – in 2016. The inspiration for its creation was the muse, or rather – MUSA. Yes, we are talking about the aforementioned Mexican Underwater Museum. This is the first modern underwater museum in Europe (real underwater cities were not taken into account). The installations of the museum were created with the important mission of drawing public attention to the problems of the environment and climate change. Another significant goal in the planning of the museum was to create a new habitat for marine inhabitants. Visit this ideal diving spot at your earliest opportunity, where an installation of 300 extraordinary sculptures awaits you.

There are many beauties in the United States, but if you love a seaside vacation, then Florida is the perfect place to travel. Dubbed the Keys, the stunning islands won’t leave you indifferent. Among the local attractions there is also an amazing underwater museum, relatively speaking, located at the sites of shipwrecks. Once majestic sea vessels, whose captains lost control, now rest on the sandy bottom, giving shelter to all kinds of fish and other inhabitants of the depths.

Yes, you read that right – there is also an underwater museum in Crimea, although not even all the locals have heard of it (and even more so – not all have visited). The museum, named “Leaders’ Alley”, has become a real “cemetery” of monuments. Looking at the faces of the rulers, frozen in stone and resting on a sandy bottom, you acutely feel how merciless time is for us – people. How nature takes its toll and erases human deeds, covering it with water and sand. In general, it is very atmospheric here. It’s a pity that the Black Sea fish are not as picturesque as in Florida. Otherwise, there would be no end of tourists.

Even if you do not have a scuba diving license, you can still admire the beauty of these picturesque corners. Most can also be seen by snorkelling or glass bottom boat tours. Of course, you will first have to wait for the final completion of the quarantines.