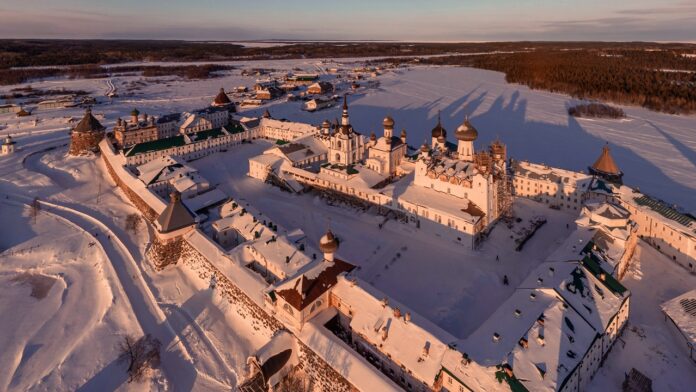 The Solovetsky archipelago, consisting of six islands with a total area of more than 300 sq. km, located in the western part of the White Sea, about 150 km south of the Arctic Circle and 250 km west of Arkhangelsk. The archipelago has revealed many different archaeological sites, the most ancient of which date back to the II-III millennia BC: these are the sites of primitive man, stone labyrinths, burial mounds, dolmens. Over 200 monuments of history and culture belong to the monastic period, which began in the first half of the 15th century, when the monks Zosima and Herman founded a monastery in the western part of Bolshoy Solovetsky Island.

It received the name of the Transfiguration of the Savior, but more often it was called and is called the Solovetsky Monastery. The central place in the historical and architectural ensemble is occupied by the majestic Solovetsky Kremlin, surrounded on all sides by powerful stone walls with eight towers and seven gates (erected at the end of the 16th century). In 1992. the historical and cultural complex of the Solovetsky Islands receives the status of a world cultural heritage site. However, according to many experts (in particular, specialists from the Russian Research Institute of Cultural and Natural Heritage, Moscow), it is necessary to include the surrounding natural landscape, which forms a single and indissoluble whole with the monastery buildings.

The Solovetsky Archipelago consists of six islands in the western part of the White Sea, covering about 300 km. They have been inhabited since the 5th century BC. and significant traces of human presence from the 5th millennium BC. can be found there. The archipelago has been the site of fervent monastic activity since the 15th century, and has several churches from the 16th to the 19th centuries.

Established in the 1430s, the Solovetsky complex is a classic example of the tenacity, courage and diligence of the monks of the Russian Orthodox Church in the inhospitable environment of Northern Europe. The complex is unique in the integrity and protection of its religious, residential, domestic, defense and waterside constructions, its road network and irrigation systems of the Middle Ages, which are harmonious with the surrounding natural and cultural landscape as well as with archaeological sites. mixed with forms that indicate ancient and the medieval culture of the islands for six thousand years. The Solovetsky complex represents all periods of the history of the archipelago and the Russian North in general.

The heart of the historical and cultural complex of the archipelago is the architectural ensemble of the Solovetsky Monastery, which is an overall unique architectural complex. Its construction is characterized by their monumentality, individuality and integrity of all components as a result of the centuries-old tradition of building.

The Solovetsky Historical and Cultural Complex is the only large group of monuments in northern latitudes, built from local stones in combination with the rare brick and forged iron produced on Solovki. The peculiar linear design of the façade and the high density of the buildings on small areas contribute to the integrity and architectural expression of the ensemble. The fort is the only Russian fortification complex built using large boulders, which adds much to its personality.

The great diversity and uniqueness of Solovetsky monuments with the northern forest forms a rare cultural and natural synthesis. Archaeological studies over the past 20 years have identified some interesting new materials that expand the cultural context of the property.

Solovki is often recognized by the public as one of the first and most famous Soviet special purpose camps of GULAG. The islands have been used as a place of exile since the 17th century.

More Heritage Sites In The World

Previous article
Underwater Museums: 6 Amazing In The World
Next article
5 Most Colourful Cities To Visit In The World