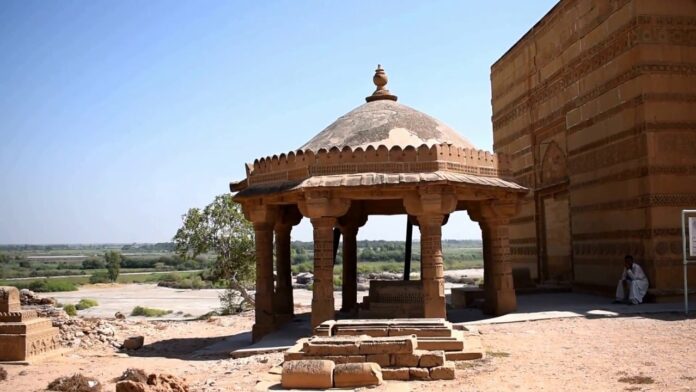 Makli Historical Monuments : The capital of three successive dynasties and later ruled by the Mughal emperors of Delhi, Thatta was continuously ornamented from the 14th to the 18th centuries. The remains of the city and its necropolis provide a unique view of the civilization in Sindh.

Near the top of the Indus river delta in the southern province of Sindh in Pakistan is a vast cemetery containing half a million graves and tombs in an area of about 10 km2. Perched on the edge of the 6.5 km-long plateau of Makli Hill, the cemetery of Makli – which was linked to the nearby town of Thatta, which was once the capital and center of Islamic culture – bears testimony to the civilization of Sindh in a classic way. 14th to 18th century.

The Great Cemetery of Makli is the largest in the world. Kings, queens, governors, saints, scholars and philosophers are buried here in brick or stone monuments, some of which are decorated with splendidly glazed tiles. Among the outstanding monuments built in stone are the tombs of Jam Nizamuddin II, who ruled from 1461 to 1509, and the tomb of both Lasa Khan Tarkhan the Younger and his father, Jan Baba, built before 1644.

The most colorful Diwan belongs to Shurfa Khan (died 1638). The unique assemblage of monumental structures presents an impressive sequence of monumental buildings in different architectural styles. These structures are notable for their fusion of diverse influences into the local style. These influences include, among others, the Gujarat style of Hindu architecture and the Mughal imperial architecture. Distant Persian and Asian examples of architectural terra-cotta were also brought to Makli and adapted. An original concept of stone decoration was formed in Makli, probably determined by the imitation of painted and glazed tile models. The historical monuments at Makli’s graveyard stand as eloquent evidence of the social and political history of Sindh.

Criterion (iii): The historical monuments at Makli, Thatta bear excellent testimony to the civilization of the Sindh region from the 14th to the 18th century. The site preserves a grand memorial complex in a state of exceptional integrity that includes the remains of the necropolis, which is located on the edge of the Makli Plateau and covers an area of approximately 10 km.

Within the boundaries of the property are located all the elements and components necessary to express the outstanding universal value of the property, including the mausoleum and tombs located in the cemetery of Makli. Nevertheless, many historical monuments have reached an advanced stage of decline. The integrity of the property is threatened by significant erosion caused by local climatic conditions (earthquakes, temperature changes, salinity and humus winds, heavy rains, natural development) and riverside shifts. In addition, the site is threatened by encroachment and vandalism, and theft and loss have assumed enormous proportions.

The historical monuments at Makali, Thatta are authentic in terms of their forms and design, material and substance, and locations and setting. Because the elements of the property are in an advanced state of decay and disintegration, however, the authenticity of the property is threatened, particularly with regard to the materials and forms of the monuments. Unless scientific action is taken to reduce the hazards to property, irreparable damage will occur.

Q. What is Makli famous for?

A – The Great Cemetery of Makli is the largest in the world. Kings, queens, governors, saints, scholars and philosophers are buried here in brick or stone monuments, some of which are decorated with splendidly glazed tiles.

Q. How old is Makli Cemetery?

Q. How far is Makli from Karachi?

A – The distance between Karachi and Makli graveyard is 91 km. The road distance is 99.6 km.

Q. What does thatta mean ?

A – An expression of encouragement, support, or approval towards a girl, woman, or female animal, used as a standalone interjection before or after a sentence. Broadly considered a corruption of the expression “she is the girl”; It is also sometimes spelled “Atta Girl”. Attagirl!

Q. Where is Makli in Pakistan?

A – The Makli Necropolis, spread over an area of ​​10 km near Thatta town in Sindh province of Pakistan, is one of the largest funeral sites in the world. The site contains approximately 500,000 to 1 million tombs built over a period of 400 years.

Q. Where is Thatta located?

A – Thatta District (Sindhi: لعو و‎; Urdu: لع) is located in the southern region of Sindh province of Pakistan, locally called Lar. Its capital is Thatta. It is home to a large cemetery in Makli.

Q. Who died in Thatta?

A – Muhammad bin Tughlaq died in 1351 during the campaign to capture Thatta. Firoz Shah Tughlaq tried unsuccessfully to subjugate Thatta twice; Once in 1361 and again in 1365.