Takht-e-Bahi : The Jewel of Cultural Heritage 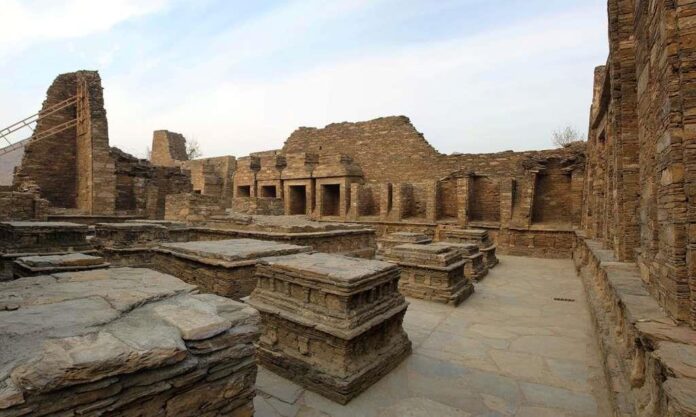 Declared a UNESCO World Heritage Site in 1980, Takht-e-Bahi offers a glimpse of a Buddhist monastery of great historical importance. Situated 80 kilometers from Peshawar and 16 kilometers northwest of Mardan in Khyber Pakhtunkhwa, Pakistan, the heritage site is located on the northern slope of a remote spur near the village of Takht-e-Bahi and contains the largest settlement in the ancient kingdom of Gandhara. Contains large Buddhist relics.

The impressive archaeological site was first identified from the extant travel records of the Chinese monk-pilgrim Xuanzang (602–64), who traveled to Greater India in search of Buddhist texts. However, even in Xuanzang’s day, the site’s main stupa—the largest and most spectacular he had seen—seems to have already been damaged. In modern times, the first to mention the site was a French officer in the service of Maharaja Ranjit Singh (1780–1839), named General Court, in 1836. It was discovered by Indian-origin British medical officer Dr. Henry Walter Bellew in 1864 as part of an archaeological survey that led to a series of excavations, and from 1910–11, Harold Hargreaves researched the site.

In Persian and Urdu, the word “takht” means “throne” or “top”, and “bahi” means “water” or “spring.” Together, the meaning is “spring on top”, and the monastery is called Takht-i-Bahi because it is situated on top of a mountain, next to a stream. Local residents believe that it was named after the spring on the left side of the site.

Although the Director General of the Archaeological Survey of India, Sir John Marshall (1902–31), believed that the high-walled monastery first appeared in the Gandhara region in the 1st century AD, recent studies by the Department of Archeology and Museums in Peshawar suggest It is believed that the site developed as a Buddhist monastic complex from the 1st century BC, beginning in the reign of the Parthian ruler Gondophares I (rc. 20–c. 10 BC) and continuing during the reign of the Kushanas. Emperor Kanishka I (r. 127–51), later Kushan kings Kanishka III (rc. 268) and Vasudeva II (r. 275–300), Kiddar Kushan rulers and Huns. The department has divided the construction into four distinct periods on the basis of its structures.

The first phase involved the construction of the stupa court—a group of stupas located in a central courtyard—and the monastery itself, as well as the kitchen and refectory, which were built from the 1st century BC to the 2nd century CE; The main stupa court and assembly hall are said to belong to the second phase or 3rd-4th centuries; The court of three stupas is dated to the third phase or fourth and fifth centuries; and the tantric complex, consisting of small, The lower-level chambers (meditation halls) and open courtyards are attributed to the fourth phase, spanning the 6th–7th centuries. Litvinsky, Zhang and Samghabadi (1996, 145–50) mention that the Hephthalites or White Huns of Central Asia (408–670) were mainly responsible for the destruction of Buddhist monasteries in Gandhara, including the Takht-i-Bahi. The monastery complex is quite extraordinary in design, and the arrangement of smaller temples around the main stupa court is particularly noticeable.

The multiplicity of archaeological layers that make up the site attest to the complex history of its construction and expansion. The structures described above, as well as several other one- and two-storey secular buildings uncovered during excavations, are built of stone in the Gandharan diaper-masonry style, using blocks of local or semi-dress stone with flakes, lime and is set in a clay mortar. . This site is a great source of historical information not only for Buddhists, but also for the history of Pakistan as a whole.

The archaeological evidence from the site is exceptionally rich. Several Gandhara sculptural remains have been excavated, including intact sculptures as well as unearthed clay, plaster and terracotta pieces. Many images have small sockets for affixing and supporting the clay body and head. Plaster images recovered from the site can also be seen in various European museums.

According to tourist-review.com, the monument is at risk of collapse if an earthquake strikes the area. The site has also been damaged by excavations and explosions in nearby mines. Some walls have been further affected by rain water. Reportedly, there are only five engineers working to protect a total of 74 historic sites in the province – not enough to keep them all in good repair condition.

A – Takht-e-Bahi (Urdu: اہی‎, literally ‘throne of the spring of water’), commonly referred to as Takht-i-Bhai (Urdu: ائی‎, literally ‘Throne of the Brother’) Mispronounced, an Indo- Parthian archaeological site of an ancient Buddhist monastery in Mardan, Khyber-Pakhtunkhwa, Pakistan.

A – The Buddhist complex and village, as locals say, are named after two wells found on the top of the hill near the complex, however, the majority believe that Takht means throne and brother. There is water in the Persian language.

A – The style was heavily influenced by the art of ancient Greece and Rome, but was also largely influenced by Indian traditions of composition. Gandhara sculpture thus blends elements of both western and eastern art. The Gandhara region has long been a crossroads of cultural influences.

Q. Who is the king of Gandhara?

A – According to the story, King Subala ruled Gandhara around 5500 years ago. He had a daughter named Gandhari, who was married to Dhritarashtra, the prince of Hastinapur kingdom. Gandhari also had a brother Shakuni, who later took over the kingdom of Gandhara after the death of his father.

Q. What is Gandhara called now?

A – The city of Kandahar in Afghanistan is said to have been named after Gandhar. According to H.W., an emigrant Bolo who collapsed from the Gandhara region in the 5th century brought this name to modern Kandahar.

Q. What are the main points of Gandhara art?

A – And in the 1st century AD, the rulers of the Kushan Empire, which included Gandhara, maintained contact with Rome. In its interpretation of Buddhist legends, the Gandhara school incorporated many motifs and techniques from classical Roman art, including bell scrolls, garlanded cherubs, tritons, and centaurs.

Q. Where is the Gandhara civilization located?

A – The Gandhara civilization existed in northern Pakistan and Afghanistan from the middle of the first millennium BCE to the beginning of the second millennium CE.

Q. How did Buddhism spread in the Gandhara region?

A – Under Kanishka the Great (128–151), Buddhist stupas and monasteries were built in the Gandhara city of Peshawar. The Kushan support of Buddhism and the establishment of secure trade routes from Gandhara to Asia allowed Buddhism to continue its spread along the Silk Road into Bactria, Central Asia and China.