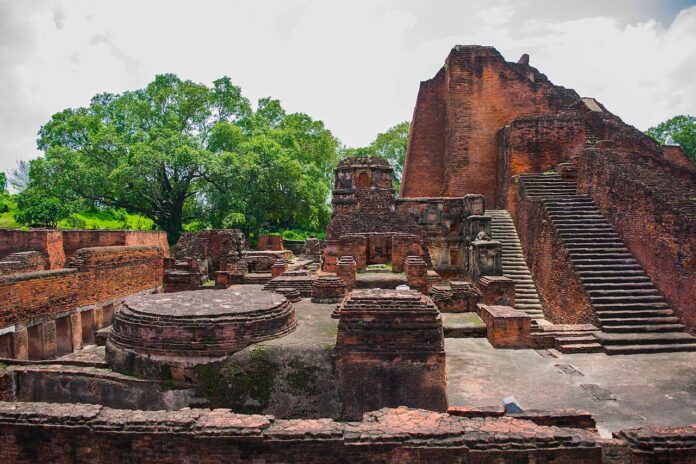 The site of Nalanda Mahavihara is in the state of Bihar in north-eastern India. It contains the archaeological remains of a monastic and educational institution dating from the 3rd century BC to the 13th century CE. It includes stupas, temples, viharas (residential and educational buildings) and important art works in plaster, stone and metal. Nalanda is the oldest university in the Indian subcontinent. It is engaged in the organized transmission of knowledge over an uninterrupted period of 800 years. The historical development of the site testifies to the development of Buddhism as a religion and the flourishing of monastic and scholastic traditions.

Nalanda, established in the 5th century AD, is famous as an ancient seat of learning. The ruins of the world’s oldest university are located here, which is 62 km from Bodh Gaya and 90 km south of Patna. Although the Buddha visited Nalanda several times during his lifetime, this famous center of Buddhist learning became famous much later, during the 5th–12th centuries. Hiuen Tsang stayed here in the 7th century AD and left a detailed account of the excellence of the education system and the purity of monastic life.

Hiuen Tsang stayed here in the 7th century AD and he detailed both the atmosphere and the architecture of this unique university of antiquity, detailing the excellence of the education system and the purity of monastic life. The world’s first residential international university was home to 2,000 Buddhist teachers and 10,000 monk-students who lived and studied here. The Gupta kings preserved these monasteries built in the old Kushan style of architecture in a row of chambers around a courtyard.

Emperor Ashoka and Harshavardhana were some of its most famous patrons who built temples, monasteries and viharas here. Recent excavations have revealed elaborate structures here. An International Center for Buddhist Studies was established here in 1951. Nearby is Biharsharif, where an annual Urs is celebrated at the dargah or mausoleum of Malik Ibrahim Baya. There is a Sun Temple at Baragaon, 2 km away, which is famous for Chhath Puja. Nalanda Museum and Nava Nalanda Mahavihara are to be visited apart from the great ruins.

The total area of ​​the excavation is about 14 hectares. All the buildings are of red brick and the gardens are beautiful. The buildings are divided by a central walkway that runs from south to north. Maths or “viharas” are temples or “chaiyas” to the east and west of this central street. Perhaps most interesting is Vihar-1, with its cells on two floors built around the Nalanda University Ruins a central courtyard, where steps lead to what would have been a platform for professors to address their students. A small chapel still retains a half-broken statue of Lord Buddha. The massive pyramidal mass of Temple No.3 is impressive and offers a splendid view of the entire area from its top. It is surrounded by small stupas, many of which are studded with smaller and larger statues of Lord Buddha in different postures or “postures”.

Opposite the entrance to the university and the ruins of houses, there is a small but beautiful collection of Buddhist and Hindu bronzes and several indestructible statues of Lord Buddha found in the area. Two giant terra-cotta jars from the first century remain intact in a shaded enclosure at the back of the museum. The collection includes copper plates and stone inscriptions, coins, pottery and samples of burnt rice (12th century AD) found in the ruins here.

The Nava Nalanda Mahavihara is dedicated to the study and research of Pali literature and Buddhism. This is a new institute, where students from abroad also study.

Q. Who built the Nalanda University?

Q. Is Nalanda the oldest university in the world?

A – Mr Sen said the new Nalanda project, which easily had its ancestors from Al Karaouin University in Fez, Morocco – founded in 859 AD and believed to be the world’s oldest, continuously operating university, and Cairo’s Al Azhar University (975 AD), attracted widespread attention from the prestigious.

A – It has been designated by Parliament as an “International Institute of National Importance”, and began its first academic session on 1 September 2014. Initially set up in Rajgir with temporary facilities, a modern complex is expected to be spread over 160 hectares (400 acres). To be finished by 2020.

Q. Why is Nalanda University famous?

A – Nalanda, established in the 5th century AD, is famous as an ancient seat of learning. The ruins of the world’s oldest university are located here, which is 62 km from Bodh Gaya and 90 km south of Patna. He also gave a vivid description of both the atmosphere and architecture of this unique university of ancient times.

Q. Where is Nalanda located?

A – Nalanda was an acclaimed Mahavihara, a large Buddhist monastery in the ancient kingdom of Magadha (modern Bihar) in India. The site is located near the town of Biharsharif, about 95 km southeast of Patna, and was a center of learning from the fifth century CE to 1200 CE. It is a UNESCO World Heritage Site.

Q. Why was Nalanda University destroyed?

A – It is believed that Nalanda’s library was so huge that it burned for months after Bakhtiyar Khilji ransacked the university and set the library on fire. Nalanda was attacked thrice by invaders – Hunas, Gauda, ​​and finally Bhaktiyar Khilji who destroyed it completely.

A – After his recovery, Khilji was surprised that an Indian scholar and teacher had more knowledge than his princes and countrymen. He then decided to destroy the roots of Buddhism and Ayurveda. As a result, Khilji set fire to the great library of Nalanda and burned about 9 million manuscripts.

Q. What was taught at Nalanda University?