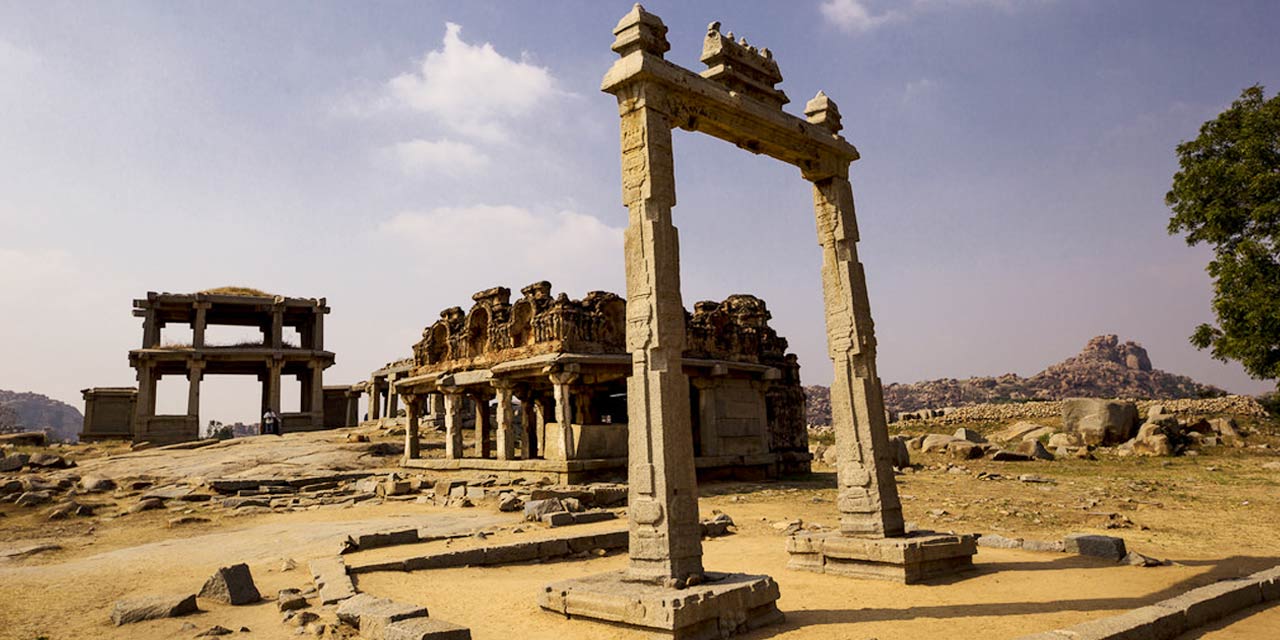 The sun, the moon, the stars, and the River Tungabhadra – these have been the constant companions to Hampi during its passage in time. Everything else has remained transient. Places to visit in Hampi. Hampi is a UNESCO designated World Heritage Site of India situated 14 kilometers from Hospet in Bellary district, Karnataka.

It is considered the hallmark of the history and culture of the Kannada people. Today, tourists throng Hampi to see, touch, and feel the glory that it enjoyed 500 years ago. It was in 1509 that Tuluva Krishnadevaraya was crowned the Emperor of the Vijayanagara Empire and gave it 20 years of outstanding leadership. His name is synonymous with Hampi. It was one of the most formidable empires in Indian history.

Touring the Religious Centre does not turn out to be a mini-pilgrimage for you because of several reasons. For one thing, it simply represents the spiritual facet of life in the ‘City of Victory’ and resembles any other populated city with myriad Hindu gods sharing space in a compact neighborhood.

For another, very few of these structures are ‘active’ today so you will be more engrossed in the architecture and panoramic views than removing your shoes! Besides, these visits will be interspersed with short rides through the capital as the temples are spread out. Finally, your Hampi shopping happens here.

The Royal Centre at Hampi provides insight into a lifestyle shaped by affluence, overseas influences, and technical finesse in the architecture. Some of it, like the Old Palace, has been razed to the ground and only the foundations remain, based on which many legends of grandeur have been re-built. For instance, a few structures and many artifacts at the Palace were made of sandalwood. However, the structures that still remain today speak of a simple yet comfortable life fashioned among the rocks and boulders of the surrounding hills. The powerful and popular king clearly chose to live among his subjects.

Though all of Hampi is in ruins today, the Vittala temple area is especially regarded as representative of the damage it suffered. An interesting amalgamation of religion, culture, and commerce, this is where overseas traders camped and did business. Though it is further upstream along the river from Religious Centre, this location also has temples and structures to indicate that Shiva and Vishnu commanded equal worship in this kingdom. Then again the musical pillars and Sun Chariot remind of the architectural excellence with which Vijayanagara was visualized and built. What remains of the old bridge to Anegundi is further testimony.

Jain temples and caves appear here as a separate tourist attraction for a few reasons. Primarily it focuses on the fact that Jainism had a distinct presence in what was a predominantly Hindu-ruled region. Also, it is a deviation from the three most commonly toured sections of Hampi and introduces the traveler to the trekking component of the total Hampi experience. By inference, this is a part of the extended tour of Hampi, something which may get a casual mention by your typical one-day sightseeing tour guide. This section also looks at the surrounding hills of the capital city of Hampapura.

Across the river, Tungabhadra from the city of Hampi is the present-day village of Anegundi which is significant as the erstwhile seat of the Vijayanagara Empire. It is here that the descendants of the Aravidu dynasty – the last of the Vijayanagara lineage – continue to live and command the respect of their ‘subjects’. Anegundi, now in Koppal district, is also the site of some pre-historic caves and other remnants of the early days of the Empire, and it is reached by a coracle ride across the river. It is also considered as the capital of the mythological kingdom of monkeys – Kishkindha – from the times of Ramayana!

As you leave behind the dust and noise of Hospet and begin rolling along the road to Hampi, a knowledgeable guide will point out to you a few small things associated with Hampi. You will recall that 500 years ago was the time for horse-driven carriages at best, and many visitors to the capital came by foot too. Then you will notice ruined mantraps along the way which were the traveler’s resting places and toll collection points as well.

Two temples dating back to that time also lie along this route: Malapanagudi and Ananthashayanagudi (Gudi is Kannada for a Temple), just off the road and located inside villages where people reside even today. Closer to Kamalapur, the aqueduct system of conveying water in stone channels for agriculture becomes evident. The Kamalapur Tank occupies a vast area and continues to provide water to the lands as before. As in the rest of Hampi, sighting birds is another lesser-known possibility here.

Hampi Utsav, also called Vijaya Utsav was instituted by the Karnataka State Government and held every year in November since 1995, except for 2002 when there was a drought. The festival in 2009 was deferred to Jan. 2010 to hold the 500th Anniversary Celebrations of King Krishnadevaraya’s ascension to the throne.

This Festival, usually held between 3rd to 5th November, is a season of gaiety and pomp. Events from the times of the Vijayanagara Empire blend in with contemporary performances presented by Indian and international artists of repute. Serious travelers though may prefer the peace at other times.

The Tungabhadra Dam is a recent development compared to Hampi and it is not even in the same direction when you start from Hospet. Yet it forms the concluding part of the typical Hampi sightseeing tour. It is also a refreshing change from the dry, rock-strewn terrain of Hampi, while the reservoir gives the tourist an idea about how Tungabhadra has sustained life for ages. Not very long ago, tourists managed to get accommodation at the Guest Houses with a spectacular view of the reservoir. Security concerns today have largely curtailed the access of the general public yet visitors throng the Dam during the tourist season.

The Daroji Sloth Bear Sanctuary has been developed since 1994 in the rocky hillocks that stretch between Daroji Village, Sandur Taluk, Bellary, and Ramasagar, Hospet Taluk, Bellary. Previously known as the Bilikallu reserve forest, it is home to several other beasts and birds, yet it gains a unique distinction as a habitat for sloth bears. At a distance of a little over 15 kilometers from Kamalapur, Daroji represents how animal life has thrived in the same rocky terrain as Hampi. Here, the sloth bears sustain their lives with fruits, honey, and termite mounds available in abundance and live in the numerous caves located within the sanctuary.

Q. Are Hampi temples exclusively meant for the believers of the Hindu religion?

A. Being the Hindu temples, they are holy to the Hindus who come and worship at this site but a large chunk of people following other faiths too arrive here. They explore the enchanting architectural richness of these medieval monuments as travelers and so do some of them worship here to showcase religious harmony.

Q. When should I travel to Hampi?

A. Hampi can be traveled anytime throughout the year but it is better to avoid the summer season. September to April months is best suitable for a trip to Hampi.

Q. What are the most popular temples of Hampi I must visit?

A. There are many temples in Hampi but the most famous ones include Virupaksha Temple, Vitthala Temple, Monkey Temple and Achyuta Raja Temple which you must visit during a trip.

Q. Is Hampi the birthplace of Hanuman?

A. There is a belief that Monkey Temple or popularly known as the Yantrodharaka Hanuman Temple is the location where Hanuman took birth.

Q. Can I join locals in Hampi to participate in their festivals?

A. The annual festivals like Vijaya Utsav in November and Purandara Festival in January/February and several others o local nature are worth exploring. They portray the cultural significance of the region. Tourists are encouraged to participate in them.