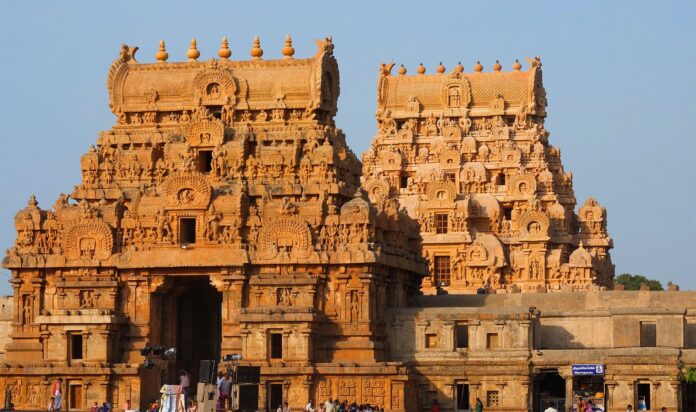 Rice bowl of Tamil Nadu and the cultural capital of the country in the 18th century, Thanjavur rose to prominence during the Chola reign. Temple architecture was redefined during their rule, and a new paradigm of Dravidian architecture was set. The 11th century Big Temple or the Brihadeeswara Temple in the heart of the town stands testimony to such a tradition. The structure is a UNESCO World Heritage Site and is unparalleled in terms of grandeur, scale, and detailing. Conceived during the heyday of Chola rule by the great Rajaraja Chola I, the Brihadeeswara temple for centuries has attracted fascinated artists, curious historians, sociologists, and travelers who delight in its wealth of sculptures, beautiful calligraphy, frescoes, and over a hundred inscriptions on the walls. This artistic tradition was righteously carried forward by the Nayak and Maratha kings, and one can get a glimpse of it in monuments such as Serfoji Mahal Library and Tanjore Palace to name a few. Below are the top 10 places to visit in Thanjavur.

Regarded as ‘the temple of temples’, the Brihadeeswara temple or Rajarajesvaram in the Thanjavur district, is not just an expression of artistic brilliance, but also a way of life. This Dravidian architectural marvel was conceived during the heyday of Chola rule around the turn of the first millennium AD by the great Rajaraja Chola I. A great patron of art, the most magnificent of temples across South India and exquisite bronze icons came up during his reign. Brihadeeswara temple for centuries has attracted fascinated artists, curious historians, sociologists, and travelers who delight in its wealth of sculptures, beautiful calligraphy, frescoes, and over a hundred inscriptions engraved on the walls.

About 2 kilometers to the northeast of the Brihadeeswara temple is the erstwhile stronghold of the Nayak kings, the Vijayanagara Fort dating back to early 1550 AD. Built partly by the Madurai Nayaks and the Maratha rulers, the great fort houses the Tanjore Palace, Sangeetha Mahal, Saraswati Mahal Library, Shiv Ganga garden, and an art gallery that has an array of ancient sculptures and paintings. The structure was conceived by Nayak ruler, Vijay Raghav to protect the Tanjore Palace from enemy attacks. Today, a section of the fort is open to visitors, though most of it is in a dilapidated state.

About 65 kilometers (40.6 miles) from Thanjavur in the tiny Sethubaba Chattiram hamlet lies the Manora Fort, an eight-tiered hexagonal tower standing 230-meter tall (766 feet) over the Bay of Bengal. Manora – a derivative of the word ‘minaret’ – is the work of Maratha king Serfoji II in 1814-15 to immortalize British Victory over Napoleon Bonaparte in the Battle of Waterloo. Owing to the fragile condition of the structure, it is no longer possible to scale up the tower for an uninterrupted panoramic view of the palm-fringed Bay of Bengal.

The structure was built during the 8th World Tamil Conference in the heart of Thanjavur. It has a small, but a well-manicured garden with slides and swings, and a museum on the ground floor of the main mandapam. Today, its maintenance and upkeep are under the State Archaeological Department. This museum was set up in 1984 to mark the 1000th birth centenary of Raja Raja Chola, the greatest Chola king of all time. Raja Raja Chola I (985-1014 CE) is looked up with awe for his military conquests, administrative prowess, religious tolerance, and penchant for art, culture, and architecture.

Steeped in mythology and folklore, the Aalangudi temple in the Thanjavur district is dedicated to Lord Guru. Legend has it that Lord Shiva consumed poison ‘Alavisham’ at this site, and hence the name ‘Aalangudi’. Here the presiding deity faces the south as he is believed to be the Lord of Dhanusu and Meena Rashi. Locals throng the shrine on Thursdays to have puja performed. It is considered auspicious to offer prayers at the temple on this day.

Chandra Bhagwan or Moon temple is located on the Thiruvaiyaru-Kumbakonam route, about 25 kilometers (15.6 miles) north of Thanjavur. It is among the prominent navagraha (nine-planet) temples in and around the temple city of Thanjavur. Legend has it that at this shrine, Chandran (Moon) worshipped Lord Shiva and received his blessings. The temple is popularly visited by those who have a weak moon position in their horoscope.

Thirukandiyur is a religious town known for its temples of Dravidian style, about 10 kilometers (6.25 miles) from main Thanjavur city. Hindu pilgrims particularly from South India make a beeline for this ancient temple town. Most temples here are of exquisite architectural beauty. Do visit the Harsha Vimochana or Kamalanathan and Brahma Sri Kandeswarar temples, they are steeped in legend and folklore, and have a palpable aura. It’s a wonderful opportunity to photograph the gopurams (spires) heavy with sculptures.

A serene panchayat town on the banks of River Cauvery, Thiruvaiyaru in the Thanjavur district is known for its ancient Lord Shiva temple, and for being the birthplace of the legendary 18th-century music composer, Saint Thyagaraja. Thiruvaiyaru is about 13 kilometers (8.12 miles) north-west of main Thanjavur city and has over the years become quite a hub for art, culture, and religion. Devotees make trips year-round to worship at the sacred shrine of Panchanatheeswar, while music connoisseurs congregate every January for the eight-day festival of Carnatic music in honor of the great saint, Thyagaraja.

9. A day trip to Kumbakonam

The ancient temple town of Kumbakonam makes for a great day trip from Thanjavur, about 40 kilometers (25 miles) away. Kumbakonam receives a huge influx of Hindu pilgrims from across the country, particularly South India. A lot of visitors come here only for the Mahamaham festival celebrated with great pomp every 12 years in the month of Masi (February-March) at the Mahamaham tank in the city. Devotees by the thousands take to the streets, and head for a holy dip in the Mahamaham tank. You can’t miss the frenzy at this time of the year.

10. Our Lady of Sorrows Church

Located on Pookara Street, Our Lady of Sorrows is possibly the oldest church in the Thanjavur district. The locals fondly call it Viagula Madha Church. As per historical records, the church has been in existence on Pookara Street several years before the time of Veramamunivar in 1740 AD. He is believed to have played a pivotal role in the development of the Tamil language. The great Maratha king, Serfoji (1798-1832 AD) had contributed immensely towards the construction of the church, by allocating land and donating money. He even helped several other churches come up in Thanjavur.

Q. What is Thanjavur famous for?

A – Thanjavur is an important center of South Indian religion, art, and architecture. Most of the Great Living Chola Temples, which are UNESCO World Heritage Monuments, are located in and around Thanjavur. The foremost among these, the Brihadeeswara Temple, is located in the centre of the city.

Q. Which caste is powerful in Thanjavur?

Q. What can I buy in Thanjavur?

A – Things To Buy In Thanjavur.

Q. Does Thanjavur have beach?

A – If you want to get away from the hustle and bustle of city life and enjoy a break from your everyday tasks, Thanjavur beach holidays are the perfect getaway option for you. The picturesque view of turquoise waters lapping over the passive shores and breathtaking sight of the sun setting

Q. Is Thanjavur worth visiting?

A – Thanjavur is a temple city and has numerous magnificent examples of great ancient architecture. If you are in the good for a vacation that is also a knowledge trip done history lane then Thanjavur is the place for you!

Q. What is the main theme of Thanjavur art?

A – In Thanjavur paintings one can see the influence of Deccani, Vijayanagar, Maratha and even European or Company styles of painting. Essentially serving as devotional icons, the subjects of most paintings are Hindu gods, goddesses, and saints.

Q. What is the old name of Thanjavur?

A – Thanjavur (Tanjavur or Tanjore) is a temple site in the Tamil Nadu region of southern India. Thanjavur was the capital of the great Chola (Cola) king Rajaraja I, and it was he who commissioned the site’s magnificent temple, the Brihadishvara, in the early 11th century CE.

Q. How old is Tanjore temple?

Q. What is the Speciality of Tanjore temple?

A – The temple has a massive colonnaded prakara (corridor) and one of the largest Shiva lingas in India. It is also famed for the quality of its sculpture, as well as being the location that commissioned the brass Nataraja – Shiva as the lord of dance, in 11th century.

Q. Why Thanjavur is called rice bowl of India?

A – Thanjavur district is called ‘The Rice Bowl of Tamil Nadu’ because of its agricultural activities in the delta region of river Cauvey. The temple, culture and architecture of Thanjavur are famous throughout world.

Q. How did Thanjavur became a temple town?

A – So Thanjavur is also an example of a temple town, where urbanisation (the process by which cities grow) happened as temples became central to society and economy. Temples were built by rulers not only to show their devotion but also to unify different communities.

Q. How can I reach Thanjavur?

A – Here is how to reach Thanjavur.

Q. What paint is used for Tanjore painting?

A – Following are the tools and raw materials required for Tanjore Painting: Chalk Powder and Tamarind Seed Powder (Molding Paste): It is used to make relief work on canvas. Paints: It is used to paint the figure according to the design. Water: It is used for mixing purpose.

Q. Who was the ruler of Thanjavur?

Q. What is the meaning of Thanjavur?

A – Thanjavur, formerly Tanjore, is a city which is the headquarters of the Thanjavur District in the south Indian state of Tamil Nadu. Scholars believe the name Thanjavur is derived from Tanjan, a legendary demon in Hindu mythology. The foremost among these, the Brihadeeswara Temple, is located in the centre of the city.

Q. Why is Brihadeshwara Temple misfortune?

A – Because of the king’s death in the complex, it can be said that any ruler who visits the temple will lose his power immediately. This can be seen from the fact that his son, Rajendra immediately scooted away from Thanjavur to build his own city and Brihadeeswara temple just across the river.

Q. How is Tanjore temple built?

A – The tower was built hollow by the master designers by interlocking the stones without using any binding material!!! After the Vimana, temple is capped by a single 80 ton (73,700 kg) monolithic solid granite block. The Sikhara, a spherical dome, is octagonal and rests on top of this granite block.

A – A study in Oriental architecture or history is certainly incomplete without a mention of the Tanjore Brihadeeshwara Temple or the Tanjore Periya Kovil (Big Temple). The main temple is entirely built of granite. More than 130,000 tons of granite is said to have been used to build it.

Q. How many temples are there in Thanjavur?