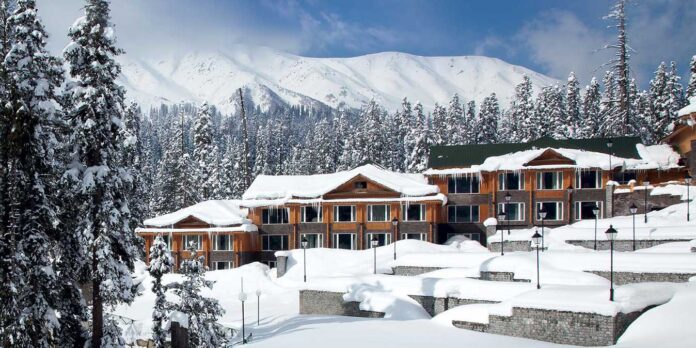 If one were to look for a single event or person to pin Gulmarg’s enchantment on, it would perhaps be the stay of the Aurel Stein (November 1862 – October 1943) on these long grassy downs. Stein was an explorer and scholar of repute. He had traveled through much of Central Asia and his discoveries were able to add significantly to the corpus of knowledge of that relatively unknown area and to the study of Buddhism. In between his travels, Stein, who had seen some of the most spectacular landscapes in the world, would camp for months on end at Gulmarg. He was not alone in his admiration of the beauty of the place and many of the British posted in India would holiday here. We have got top 7 places to visit in Gulmarg for you.

Today’s Gulmarg has gone several steps beyond being a temporary home for those few holiday makers and convalescents – and this is, arguably, the finest mountain resort in India. The landscape has an unparalleled beauty, it has one of the finest golf courses in India and its ski slopes are considered at par with the best in the world. The word ‘Gulmarg’ means ‘Meadow of Flowers’ and the undulating downs are covered with a variety of wildflowers in late spring and summer. Most of the architecture is unaggressive and blends well with the terrain – and attractive wooden houses predominate with languid curves and easy dips and rises along the inner and outer circular roads that encircle Gulmarg. A walk right round the outer one, at an easy pace, will take a couple of hours.

A path of some six kilometers and an ascent of some six hundred meters from Gulmarg will take you to the little highland dale of Khilanmarg. The narrow bridle path is lined by grassy knolls and a variety of trees and shrubs that include masses of daises, mulberry, berberis and walnut among others. Should you prefer riding to walking, ponies may be hired for this little hike. While the ascent is focused on the path ahead, once you are at the top – and on a clear day – an absolutely magnificent vista unfolds. Clearly visible is the western marker of the Himalayan chain, the Nanga Parbat and the twin peaks of Nun (7,135 meters) and Kun (7,077 meters).

Today, the gondola car is one of the main attractions of the place. The first of two sections of the cable car rises from the cable station at Gulmarg at an altitude of 2699.6 meters to Kongdori at an altitude of 3099.6 meters – a vertical rise of 400 meters . It is a thoroughly enjoyable experience taking the ten minute ride up to Kongdori. At this raised vantage position and with the easy movement, the view all around can be enjoyed to its fullest. The first section of the trip goes through tall fir trees and then the landscape opens quite dramatically.

The second stage of the Gulmarg-Apharwat cable car project was completed in May, 2005. This stretch connects Kongdori station at 3,099 meters with the heights of Apharwat at 3,979 meters – Apharwat is the mountain that looms over Gulmarg and is the magnet for serious skiers. With the second stretch, this cable car system has become one of the longest and highest gondola projects in the world. The vertical rise between Kongdori and Apharwat is 880 meters (2887.1 feet) and this stretch is somewhat longer than the first one, and covers over five kilometers. The view, not unexpectedly, from the heights of Apharwat has a greater compass than that from Kongdori.

It is the quality and the quantity of ‘powder snow’ that has made Gulmarg an attractive international ski destination which now draws a sizable number of serious skiers from different parts of the world. This aspect to Gulmarg’s skiing repertoire was added when the gondola car became operational and was able to carry skiers and snow-boarders to Kondori and then to the heights of Mt. Aparwat. Heli-skiing is also being mooted. Today, Gulmarg is steadily coming into its own as a ski-resort. Several Indian and foreign operators offer the sport with skilled instructors. The levels you can take are beginners, intermediate, advanced and professional. For the last, you would have to be skier of considerable experience.

One of the oldest golf clubs in the country, the Gulmarg Golf Club also has the distinction of being one of the (if not the), highest in the world. This is an 18 hole, par 72 course with a yardage of 6,985. The club was started in the early twentieth century by the numerous British officers who holidayed in Gulmarg. This was redesigned in the nineteen-seventies by the Australian golf champion, Peter Thomson. The Gulmarg course has one substantial advantage over others and this is the pleasant climate and the cool breeze that allow players to remain on the course for longer periods of time.

Some 13 kilometers (8 miles) from Gulmarg, at an altitude of around 3,840 meters is the little lake of Alpather. Like many other high-altitude lakes in the mountainous parts of the western Himalaya, this lies in a shallow mountain bowl and is surrounded by limited plant growth and a substantial amount of scree. A well marked path from Gulmarg reaches the lake which lies at the base of the Apharwat Mountain. Not unexpectedly, the lake freezes over fairly early in winter and remains under a sheet of ice till the late-summer thaw in June-July. Even then, this triangle-shaped water body holds chunks of ice that resemble a shattered windscreen. In the silence, you can occasionally hear the ice cracking in the warm sunshine of summer. Interesting, and unusually for high altitude lakes, at times, this has some avian life too.

There are four main religious shrines in and around Gulmarg. A few kilometers from this glade, is the tomb and shrine, ‘Ziarat’, of the noted Muslim saint Baba Reshi. Built in 1480 CE, the ‘Ziarat’ is supposed to be on the spot where Baba Reshi passed away and where he is buried. More popularly known as the ‘Maharani temple’ or the ‘Rani temple’, the temple dedicated to Lord Shiva lies on a small hillock in the middle of Gulmarg. There is the old St. Mary’s Church that was built by the British holiday-makers; and in Gulmarg’s vicinity is the Avantiswami temple that dates back to the ninth century and is dedicated to Lord Vishnu.

Gulmarg rests on an edge of the Pir Panjal mountains. Clearly visible is the western marker of the Himalaya mountains, the 8,126 meters high Nanga Parbat. Several other peaks also ring the area. The ski club dates back to 1927. A fresh dimension was added when a gondola car became operational – the second phase was completed in 2005. This is able to carry serious skiers almost to the top of the 4,100 meters Mount Apharwat from where long runs over varied faces, bowls and ridges have become available on good powder snow.

Must Read – SANGLA VALLEY – THINGS TO DO

Q. What is the best time to visit Gulmarg?

A – The beautiful meadows of Gulmarg, usually lush green during April and early May are enveloped in a sheet of white snow during the snowfall in Kashmir. The best time to visit Gulmarg for Snowfall is just after peak winter – January and February.

Q. Is Gulmarg safe for tourists?

A – Gulmarg is one of the main tourist hubs of Kashmir and is very safe for tourists. It hardly gets affected by any unrest in Srinagar.

Q. Which is better Pahalgam or Gulmarg?

A – I would suggest Gulmarg only, because, Pahalgam will be under snow in January. Most of the sights (Aru, Chandanwadi, Betaab Valley etc) will be inaccessible. So, it is better to enjoy snow activities. It would be convenient to stay in Srinagar on the last day to catch the flight.

Q. Is one day enough for Gulmarg?

A – 2 days of stay excluding travel time is sufficient. One day to enjoy in Gulmarg and another day for Gondola ride till the second phase.

Q. Why is Gulmarg famous?

A – ‘meadow of flowers’) in Kashmiri, is a town, a hill station, a popular skiing destination and a notified area committee in the Baramulla district of Jammu and Kashmir, India. The town is situated in the Pir Panjal Range in the Western Himalayas and lies within the boundaries of Wildlife Sanctuary.

Q. Why is 4G banned in Kashmir?

A – In August 2019, the Government of India barred all broadband as well as mobile internet services in the region to prevent the deliberately fabricated falsehood on social media. In April – May 2020, Supreme Court of India heard a batch of writ petitions challenging the ban on 4G internet services.

Q. Is alcohol allowed in Srinagar?

A – The snow forecast is: A moderate fall of snow, heaviest on Thu night. Freeze-thaw conditions (max 1°C on Tue night, min -2°C on Tue night). Wind will be generally light.

Q. Which is better Gulmarg or Sonmarg?

A – Gulmarg is as beautiful. It offers Gandola (rope way) ride to the highest peak which I’d not there in Sonamarg. Gulmarg is the end of the destination and one can’t go any further. In my opinion Sonamarg is also better because one has the freedom to stay for travel around for min two days and nights.

Q. Which place is better Gulmarg or Manali?

A – Gulmarg is more beautiful place as compared to Manali. Visiting Gulmarg is a treat to your eyes. you need not to worry about the stay in Gulamrg as this place is filled with loads of amazing Resorts which comfort you. Meadows offers a best places to stay.

Q. What is the cost of gondola ride in Gulmarg?

Q. How can I plan for Gulmarg trip?

A – Mary’s church, Golf Course, Maharaja Palace etc. On Day 2, take a Gondola ride to the top of Apharwat peak. Trek to Alpather lake there and arrive back at Gulmarg; this will take an entire day. On Day 3, you can travel back to Srinagar.

Q. What can I buy in Gulmarg?

A – Shopping Places in Gulmarg

Q. How far is Pakistan border from Gulmarg?

A – Gulmarg is located around 127 KM away from Pakistan so if you travel at the consistent speed of 50 KM per hour you can reach Pakistan in 2.55 hours.

Q. Is alcohol allowed in Gulmarg?

A – It’s a myth that there is no Gulmarg nightlife and no alcohol available. Whilst alcohol isn’t available in most hotels, it is possible to sniff it out and find an après ski scene. … The Hotel Pine Palace is a smoky den of iniquity at the top of the village.

A – All these activities are being organized as part of the tourism revival plans and to present the resort as a lively, welcoming and an enjoyable tourism destination,” Dr Javid-ur-Rehman added. Moreover, Dr Javid-ur-Rehman said that all slopes in Gulmarg are now open for Skiing.

Q. Can I see snow in Gulmarg in June?

A – Yes, it snows in Gulmarg, especially during the extreme winter months from December till February or so. Make sure that you pack accordingly if you are visiting.

Q. Is there snow in Gulmarg in May?

A – It is difficult to witness snow or snowfall in Gulmarg in the month of May as the temperature rises to around 37 degrees Celsius. All the snow melts down until this month of the year.

Q. How far is Gulmarg from Srinagar?

A – 47 Kms Distance Between Gulmarg to Srinagar

Q. How can I go to Gulmarg from Katra?

Q. How high is Gulmarg?

Q. Is Gulmarg open in December?