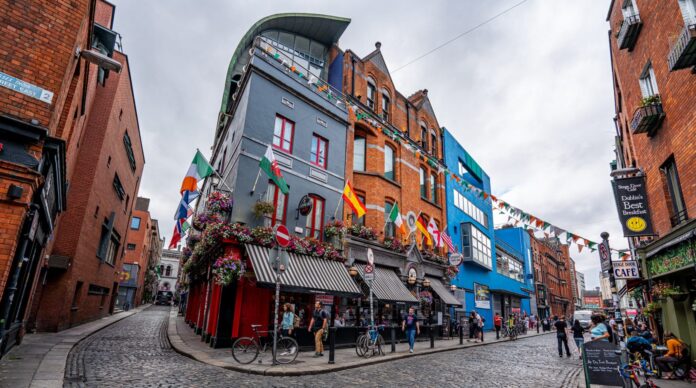 How much do you know about Ireland? That this is a European state and that’s it? Did you know that this country has an impressive and interesting history, a distinctive nature that excursion booklets cannot convey, and very tasty beer? We invite you to familiarize yourself with some of the amazing places of this country that will not leave you indifferent.

It is the longest coastal road route, with a length of approximately 3,000 km. If you ever dare to ride on it, the desire to return here again will haunt for a very long time. The views that open to your eyes, the sights that you will meet along the entire route, will remain in your memory for a very long time.

It is the tallest European cliff located in County Donegal. This destination is not as crowded as Cliff Moher, but if you do not like crowding of people, prefer peace and solitude, be sure to visit Slive League.

It is believed that these are fragments of the cliff of Moher. Once upon a time, several pieces broke off from it, which were carried out into the open sea by underwater currents. Currently, these parts are located roughly in the middle of the Wild Atlantic Way, and can be reached by ferry or plane.

The castle was built in 1425. The building has survived the Irish War and numerous owners. It is noteworthy that since the end of the XIX century. the castle is in desolation, but to this day it attracts curious visitors with its grandeur and power, wins their hearts with its medieval furnishings (utensils, furniture, tapestries, paintings, etc.) that have survived to this day.

Burren Perfumery, a family-owned company producing branded Irish fragrances, is deservedly considered a modern landmark of Ireland. The facility is located in County Clare, Burren. The splendor of the surrounding landscapes inspires growers to create their products from the plants that grow there.

Truly the town of Burren is a treasure trove of attractions. Among other things, here you can visit a local smokehouse and taste the products that are produced there.

Now you are convinced that Ireland is an amazing place, and curious travelers should definitely visit there to see for themselves. In any corner of this state, you will have the opportunity to touch its history and feel all the charm of local folklore and color.

Q. Is Ireland a safe country?

A – Ireland is listed among the top 15 safest countries in the world by the Global Peace Index 2020. It is known for being a safe and friendly country that warmly welcomes tourists and students from all over the World.

Q. Is Ireland part of the UK?

A – Ireland became a republic in 1949 and Northern part remained part of the United Kingdom.

Q. What is Ireland famous for?

A – Ireland is famous for its amazing scenery, both land and sea. Often referred to as the Emerald Isle, Ireland has lively towns next to cozy bays and sheer cliffs. Ireland is where cozy pubs, pints of Guinness and shots of Irish whiskey go hand-in-hand with hearty Irish homestyle cooking.

Q. Is it expensive to travel to Ireland?

A – Ireland is known as an expensive destination. And it can be, if you travel in high season and expect 5-star luxury. But it is possible to travel very little in Ireland, if you carefully plan your Ireland vacation budget.

Q. What currency does Ireland use?

Q. Is Ireland a rich or poor country?

A – In terms of GDP per capita, Ireland is one of the wealthiest countries in the OECD and is ranked fourth in the EU-27, OECD-28 ranking. GDP is much higher than GNP (national income) due to the large number of multinational firms based in Ireland.

Q. What is Ireland traditional food?

A – Representative dishes include Irish stew, bacon and cabbage, boxty, soda bread (mainly in Ulster), codle and colcannon. Modern Irish cuisine still uses traditional ingredients, but they are now being cooked by chefs with world influence and presented in a more modern and artistic style.

Q. Does it snow in Ireland?

A – In Ireland, snowfall usually only lasts for a day or two. During the winter, sea temperatures are warmer than on land, which can lead to frequent rain around the shores, but a few miles of snow. Rain showers can fall as snow on higher ground because the temperature generally decreases with altitude.