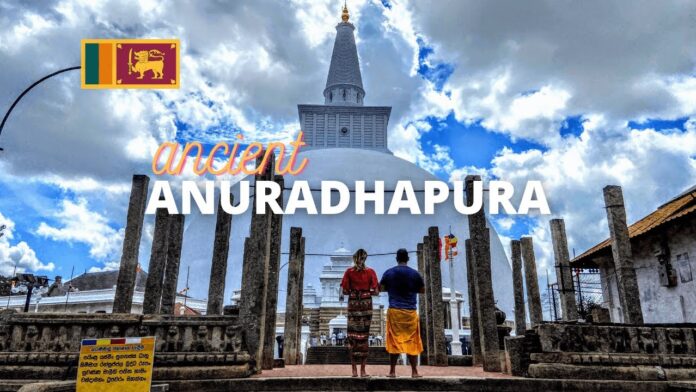 Anuradhapura is the first capital of Sri Lanka located in the North Central Province of Sri Lanka. It is one of the ancient capitals of Sri Lanka which was the center of Theravada Buddhism for many centuries. Due to the ruins of an ancient Sri Lankan civilization UNESCO designated it as a UNESCO World Heritage Site in 1982 with the name of the holy city of Anuradhapura.

Anuradhapura is the largest monastic city in the ancient world that dates back to the 5th century BC, remained the princely seat of the Kingdom of Sri Lanka until the 11th century AD. Anuradhapura flourished as the capital of Lanka from 377 BC to the end of the reign of 1017 AD. and as the capital of the country was the royal seat for 1400 years under 130 kings.

Anuradhapura was the first planned city of Sri Lanka and the first historic capital of Sri Lanka founded in the 5th century BC offers a fascinating glimpse of a stately, well-groomed pre-Christian metropolis of vast Buddhist temples and monasteries, magnificent palaces, pavilions and parks. is. Bathing ponds and vast reservoirs, many of them masterpieces of architecture, art, sculpture and engineering.

The City offers a host of memorable sightseeing places. The city was reserved for the king, his ministers and commercial activities and suburbs were planned as areas serving the city as well as settlements for ascetics. The site is replete with reconstructed monuments, reconstructed buildings, preserved ruins and historical sites where archaeological excavations are still going on. It was the cradle of the glorious Sinhalese Buddhist civilization.

The pride of Anuradhapura are ancient stupas and ancient reservoirs. High stupas or dagoba (pagoda type buildings) of imposing dome – the marvels of Sri Lanka’s ancient civil engineering were built taking into account the effect of lightning on high-rise buildings, along with many other engineering factors.

Other attractions are the magnificent rock carvings of monumental richness and remarkable grace, the colossal stone pillars that stand proudly among the ruins of royal palaces, Buddhist monasteries and temples, and the splendid stone-paved swimming pool with sophisticated hydrological engineering techniques. Huh.

Thuparama Dagaba which houses the collar-bone relic of Buddha, Isurumuniya rock temple which is a treasure trove of sculptures, 2,200 year old Sri Maha Bodhi (Sacred Bow Tree) which is the oldest historical tree in the world, 1st century BC Abhayagiri and 3rd century BC The century AD Jetwana Dagabas (UNESCO World Heritage Site) are second only to ancient Egypt’s two most powerful pyramids at Gizeh at 380 feet and 400 feet in height respectively.

The City has three main ancient irrigation lakes, Tisaveva, Nuvaraeva in the south and Basavakulama in the north, which nurtured its agriculture and adorned the capital for almost two millennia as it is today.

Q. What is special in Anuradhapura?

A – One of these was established by King Vijaya’s minister Anuradha on the banks of a stream called Cologne and was named Anuradhagama. In 377 BC, King Pandukbhaya (437–367 BC) made it his capital and developed it into a prosperous city.

A – Anuradhapura was sacked by the Pandian kings during the 9th century and then returned against the payment of ransom. Most of the monuments were restored, but in 993 AD by Raja Chola Rajaraja I.

Q. Why is Anuradhapura important?

A – The old section of Anuradhapura, now protected as an archaeological park and designated as a UNESCO World Heritage Site in 1982, is the most famous of Sri Lanka’s ancient ruined cities. The city is the headquarters of the Archaeological Survey of Sri Lanka, and tourism is an important factor in its economy.

Q. Why is Anuradhapura holy?

A – The holy city was established by cutting the Buddha’s fig tree from the ‘Tree of Wisdom’, which was brought there in the 3rd century BC. by Sanghamitra, the founder of an order of Buddhist nuns.

Q. How can I go to Anuradhapura?

A – How to reach Anuradhapur from Kandy. You can take a bus to Dambulla and then take another bus till Anuradhapura. There are also direct buses from Kandy.

Q. Which is the oldest place in Sri Lanka?

A – Anuradhapura, It is one of the oldest continuously inhabited cities in the world and one of the eight World Heritage Sites of Sri Lanka.

Q. How far is Anuradhapura from Colombo?

A – The distance between Colombo and Anuradhapura is 165 kms. The road distance is 210.7 km.

Q. Who was the last king of Anuradhapura kingdom?

A – In the 11th century, Mahinda V was the king of Anuradhapura. He was the last of the kingdom as well as the House of Lambakanna II.