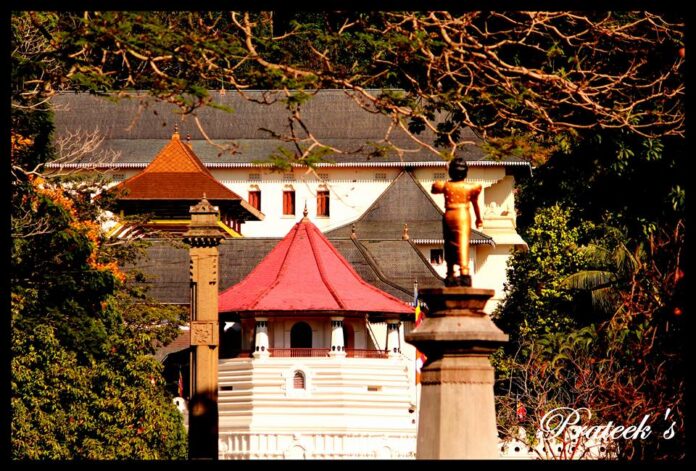 Kandy is the last royal kingdom of Sri Lanka with a picturesque landscape surrounded by beautiful mountains situated in the central part of the island situated at 1,600 feet above MSL- Mean Sea Level. It is known with the Temple of the Sacred Tooth Relic, the most revered Buddhist temple, and the Royal Botanic Garden, which houses over 4,000 labeled species of flora as well as a “planned” during the British colonial period of Kandy Ceylon. city”.

Keeping these facts in mind, UNESCO declared it as UNESCO World Heritage Site. Today it is the second most famous city in Sri Lanka with a total area of ​​1,940 square kilometers and a major tourist attraction. Culturally, it plays an important role with the mixed cultures of Sinhalese and Tamil communities. Sri Dalada Maligawa or the Temple of the Sacred Tooth Relic was built within the royal palace complex which houses the only surviving relic of the Buddha.

Kandy gets overcrowded during the month of August due to the Esala Pereira which is held as an annual tradition of the Temple of the Sacred Tooth. It usually attracts a large number of local and foreign tourists who value tradition, customs and Buddhist heritage. More than 50 elephants accompany colorful Kandian dancers and drummers in this eerie nighttime parade.

Your trip to Kandy would not be complete without an excursion around the charming Lake. This is another fascinating attraction of this city which was built in 1806 by Raja Shri Vikram Rajasinghe. Considering all these reasons, UNESCO declared this city as World Heritage in the name of the holy city of Kandy.

Kandy was the last Sinhalese kingdom until it was captured and ruled by the British in 1815. The name of King Vikrambahu is recorded in history, who built the royal palace on the advice of a Brahmin as the founding of Kandy. Sena Samata Vikrambahu was the first king, while the last king of the kingdom was Shri Vikram Raj Singh who was captured by the British and taken as a royal prisoner.

The name Kandy comes from the word Kanda which means mountain. Most of the locals refer to this delightful town as Mahanuwara which means great city. It was once named Sekkadgalpura. It was named after an ascetic named Senkada.

This was a challenging target for foreign invaders, who occupied the coastal areas quite comfortably as this great city is located in the center of the island. So it created and enhanced its independent culture, livelihood, traditions, art and architecture. Kandy as the last kingdom in the country sheltered the relic of the Buddha’s tooth. In the 4th century it was an important tradition and responsibility that the ruler of the nation would also be the sole custodian of the relic. Hence the royal palace and the temple of teeth were located close to each other at all times.

Kandy is situated within magnificent mountains, beautiful lakes and valleys, hence people say that it is a wonderful destination for sightseeing. With a rich heritage, it is full of surprises for travelers seeking cultural and religious destinations.

Many tourists from all over the world come to this wonderful hill capital to explore its glorious past, witness the beauty of nature, wildlife and get a firsthand experience of its cool climatic conditions. Kandy also has a lot to offer in terms of historical sites and monuments as it was the last state of Sri Lanka. It is one of the most important places in the country with respect to Buddhism. The city today offers you modern as well as convenient facilities and means of entertainment. The city has a lot to offer in terms of wildlife adventure sports and even hiking.

Q. Why is Kandy famous?

A – Known as a pilgrimage site for the Temple of the Tooth Relic (a sacred tooth of Buddha), a listed UNESCO World Heritage Site, Kandy is a holy city due to the importance and spiritual significance of this temple.

Q. Is Kandy worth visiting?

A – Kandy, the second largest city in Sri Lanka, is one of the most popular places to visit while backpacking through Sri Lanka. Backpackers often stop here on their way to the mountainous countryside of Nuwara Eliya and Ella. If you have 2 or three days to spare, a stop for Kandy is well worth it.

Q. What’s so special about candy?

A – Kandy is both an administrative and religious city and also the capital of Central Province. Kandy is home to the Temple of the Tooth Relic (Sri Dalada Maligawa), one of the most sacred places of worship in the Buddhist world. It was declared a World Heritage Site by UNESCO in 1988.

Q. Who was the king of Kandy?

A – Sri Vikram Rajasimha (1780 – January 30, 1832, born Kannasamy Nayaka) was the last of the four kings to rule the last Sinhalese monarchy of the Kingdom of Kandy in Sri Lanka.