Lumbini, the Birthplace of the Lord Buddha 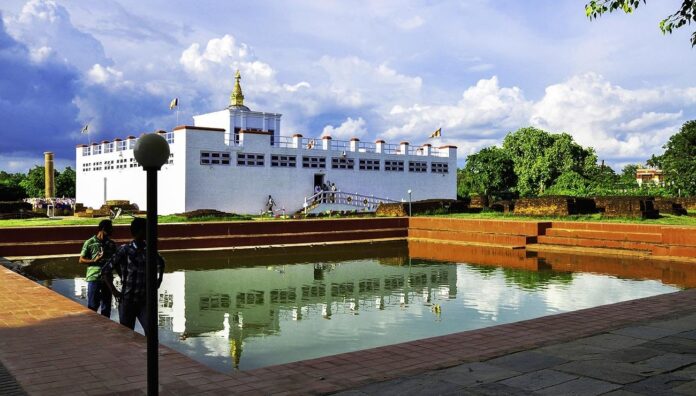 Lumbini is the birthplace of Buddha, one of the most important spiritual sites in the world and attracts Buddhist pilgrims from all over the world. Today you can visit more than twenty-five Buddhist monasteries built by different countries, from Vietnam to France, study Buddhism, meditate, and visit the birthplace within the sacred Mayadevi Gardens.

Mayadevi Temple is the holiest site in Lumbini Garden where archaeologists have identified the exact spot where Lord Buddha was born. The inscriptions on the nearby Ashoka Pillar also refer to this place as his birthplace. It is said that the newborn prince Siddhartha (later became Buddha) took his first seven steps and gave his peace message to humanity here.

The birth took place in the beautiful Sal Grove, which is now the focal point of Lumbini Gardens. Queen Mayadevi of the Shakya king Suddhodana of Kapilavastu, passing through the Lumbini Gardens on Vaisakha Purnima (the full moon day of May in 623 BC), bathed in the sacred pond Pushkarini and soon thereafter gave birth to the prince. Siddhartha.

Visit remarkably beautiful monasteries built by countries like China, Japan, Sri Lanka, Myanmar, Germany, France and many more; Admire the magnificent and varied architecture displayed by them. Enjoy the peaceful atmosphere and above all, visit the Mayadevi Temple which dates back 2,200 years.

Take a walk in the garden or find a quiet place to contemplate. The focal point for pilgrims is a sandstone carving depicting the birth of Buddha, believed to have been left here by the Malla king Ripu Malla in the 14th century, when Mayadevi was worshiped as an incarnation of a Hindu goddess. Used to go The Ashoka Pillar was built by the great Indian emperor Ashoka, who became a devout Buddhist while visiting the birthplace of Buddha in 249 BCE.

Visit the Panditram Vipassana Center for some yoga and meditation and interact with the monks living around the monasteries, devoting your time to bringing peace and harmony to all sentient beings through devotion and religious worship.

Lumbini Gardens covers an area of ​​2.56 sq km and comprises three areas each of which is connected by a square mile walkway and a canal. The region has a subtropical climate with hot summers, very wet monsoons and pleasant winters. Winter season is the best time to visit.

Lumbini Gardens covers an area of ​​2.56 sq km or 1 x 3 sq mi and comprises three areas, each one square mile connected by walkways and a canal. The region has a subtropical climate with hot summers, very wet monsoons and pleasant winters. Winter season is the best time to visit.

Q. What is Lumbini famous for?

A – Lord Buddha Siddhartha Gautama was born in 623 BC. Among the famous gardens of Lumbini, which soon became a place of pilgrimage. Among the pilgrims was the Indian emperor Ashoka, who erected a memorial pillar there.

Q. Where is the birth place of Lord Buddha?

A – Lord Buddha was born in 623 BC in the sacred region of Lumbini in the Terai plains of southern Nepal, which is confirmed by an inscription on a pillar made by the Mauryan emperor Ashoka in 249 BC.

Q. Was Lumbini a part of India?

A – Ancient India did not exist with borders. Well, Nepal was never a part of anything! No, never, Lumbini was never in India. It was always in Nepal.

Q. What is today’s Lumbini?

A – Lumbini is a village, archaeological site and pilgrimage site revered as the birthplace of Siddhartha Gautama (Buddha, lc. 563–483 BC), in the modern Rupandehi district of Province 5 of Nepal, situated near the Indian border.

Q. Is Lumbini worth seeing?

A – If Lumbini is more or less on your way then though not a great tourist destination. I would say it is still worth visiting because of its importance as the birthplace of Buddha. One thing I would recommend is to go to Pokhara from there, take the road via Tansen.

Q. Who was the prince of Lumbini?

A – Lumbini, the birthplace of Lord Buddha. Follow in Buddha’s footsteps as you explore the area where he spent his childhood as Prince Siddhartha. The exact spot where the Buddha was born is marked here at Lumbini and has become one of the most important sacred sites in the world.

Q. Who made Lumbini?

A – The great Indian emperor developed Lumbini which is now a UNESCO World Heritage Site. Ashoka visited Lumbini around 248 BCE and erected a pillar which contained material commemorating the birth of Buddha. Later, he built a wall around the village and built four stupas to mark the spot.

A – Buddha born by the name Siddhartha Gautama was a teacher, philosopher and spiritual leader who is considered the founder of Buddhism. The name Buddha means “one who is awake” or “enlightened one.” While scholars agree that the Buddha did indeed exist, the specific dates and events of his life are still debated.

Q. What was the original name of Buddha?

A – Gautam Buddha / Full name
The historical person’s clan name as Buddha (whose life is largely known through legend) was Gautama (in Sanskrit) or Gautama (in Pali), and his given name was Siddhartha (Sanskrit: “He who achieves his goal”) or Siddhartha (in Pali).

Q. In which province is Lumbini located?

Q. Who discovered the Ashoka Pillar at Lumbini?

A – The pillar was lost for centuries after it was established as regions and peoples developed. It was rediscovered only in the late 19th century by Khadga Shamsher Rana, the then governor of Palpa.

Q. How far is Lumbini from Pokhara?

A – Pokhara and Lumbini are two of the most popular travel destinations in western Nepal; Pokhara is about 125 miles (200 km) northeast.