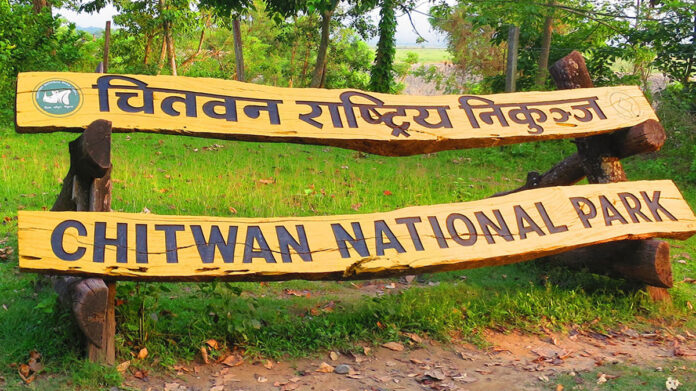 In the southern region of Nepal, the jungles of Chitwan National Park await you with wildlife experiences like no other. Go in search of the majestic Royal Bengal Tiger and watch the Greater one-horned rhinoceros roam free while the great Asian elephant roam the forests in herds. Chitwan National Park is the nearest and ideal place for wildlife safaris.

See the real wilderness in the jungles of Chitwan: Go for a jeep safari in the depths of the jungle or take a silent canoe ride and catch the wildlife in wonder. Go on a jungle walk with an experienced guide who knows the forest like the back of his hand.

Along the swamps and rivers you will find alligators and swamp crocodiles basking in the sun. These reptiles spend a lot of time lying on the sandy shore giving you enough time to see them. You can also spend some time visiting elephant and alligator breeding centers, a perfect way to educate your kids about these animals and their life cycle.

Observe local tribal life by visiting a Tharu village, where you will be welcomed inside traditional mud houses and treated as a valued guest. Add to the essence of the ultimate jungle experience by relaxing next to a large campfire at the end of the day, watching the mesmerizing Tharu Stick dance and listening to their soothing folk songs.

Chitwan National Park is the first national park of Nepal and is situated at the foot of the Mahabharata range in the Inner Terai lowlands of Chitwan. Covering an area of ​​932 sq km, it is the best-preserved conservation area in the whole of Asia. This national park houses a fascinating diversity of mammals, reptiles and birds and preserves some of the last habitats for endangered species such as the Greater One-horned Rhinoceros and the Royal Bengal Tiger.

The reserve was designated a national park in 1973 and listed as a UNESCO World Heritage Site.

Q. What is Chitwan National Park famous for?

A – National Park is renowned for having the best wildlife-watching national parks in Asia, where you will have an excellent chance of spotting the endangered one-horned rhinoceros, Royal Bengal tiger, deer, monkeys, wild boar and 544 species of birds.

A – The national park is open year-round, although most hotels are closed during the monsoon season from late June to late September.

Q. How many tigers are there in Chitwan National Park?

A – Covering more than 900 square kilometers of grassland and forest, it is a World Heritage Site and is home to 120 Bengal tigers, one of the rare places on Earth where solitary and cryptic animals can still be seen , as well as sloth bears, leopards, elephants and one-horned rhinos.

A – Chitwan is safe on crime, but in 2008 I was taken back to the airport in an open jeep by a Chinese tourist – I later learned he was trampled by an elephant as he was trying to feed a banana – so even this pet elephant used for tourists can sometimes misbehave – this is the case

Q. Are there tigers in Chitwan National Park?

Q. Are there lions in Nepal?

A – From tiny butterflies to wild rhinos and tigers, Nepal has some of the most spectacular wildlife in the world. In fact, this tiny country has all the ‘Big Five’ – lion, elephant, rhinoceros, panther and buffalo (if you swap tigers for lions!).

Q. How far is Chitwan from Kathmandu?

A – Nepal’s Chitwan National Park is on the flat, forest-covered plains of southern Nepal, about 60 miles (96 kilometers) from Kathmandu. It is a popular detour for visitors traveling between Kathmandu and Pokhara, as although it is not the most direct route, it is approximately half way between the two cities.

Q. Which is the oldest national park of Nepal?

A – Chitwan National Park is the first national park of Nepal. It was established in 1973 and was given the status of a World Heritage Site in 1984.

Q. How many rhinos are there in Chitwan National Park?

Q. How many animals are there in Chitwan National Park?

A – The park is home to over 50 mammal species, over 525 birds, and 55 amphibians and reptiles. The endangered fauna found in the park are: one-horned rhinoceros, gaur. Royal Bengal Tiger.

Previous article
KATHMANDU VALLEY : BEST THINGS TO DO
Next article
Lumbini, the Birthplace of the Lord Buddha