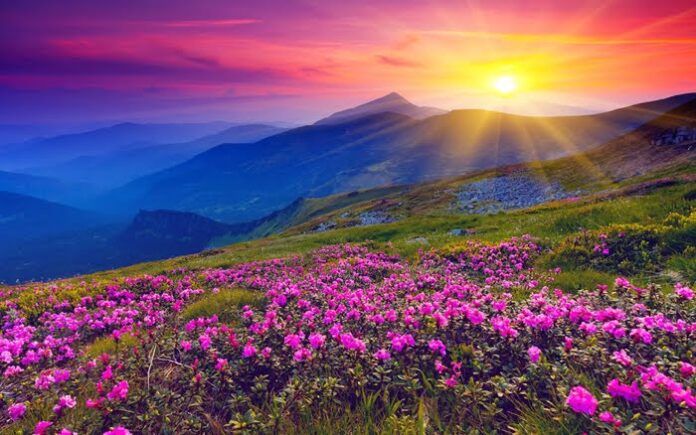 Situated in the West Himalayas, the Valley of Flowers National Park of India is famous for its endemic alpine flowers and excellent natural beauty. This richly diverse region is also home to rare and endangered animals, including the Asiatic black bear, snow leopard, brown bear and blue sheep. The gentle landscape of the Valley of Flowers National Park complements the rugged mountain forest of Nanda Devi National Park. Together they encompass a unique transition zone between the mountain ranges of Zanskar and the Great Himalayas, which have been admired by climbers and botanists for more than a century and in Hindu mythology for a very long time.

Nanda Devi and Valley of Flowers National Park are exceptionally beautiful high altitude West Himalayan landscapes with excellent biodiversity. One of the most spectacular wilderness areas in the Himalayas, Nanda Devi National Park is dominated by the 7,817-meter peak of Nanda Devi, India’s second highest mountain, which runs through the sage Ganga Gorge, one of the deepest in the world. Valley of Flowers National Park complements the rugged, rugged, inaccessible mountainous forest of Nanda Devi, with its gentle landscape, beautiful grasslands of alpine flowers and ease of access. Apart from some community-based eco-tourism in small part of these parks, there has been no anthropogenic pressure in the region since 1983. This property therefore serves as a control site for the maintenance of natural processes, and is of high importance for a long period. Ecological Monitoring in the Himalayas

Both parks have a high diversity and density of flora and fauna of the West Himalayan biogeographic region, with significant populations of globally threatened species, including snow leopard, Himalayan musk deer and many plant species. Covering 61,210 hectares, these two parks are surrounded by a large buffer zone of 514,656 hectares, covering a wide range of elevations and habitats. This entire area, located within the Western Himalaya Endemic Bird Area (EBA), supports mountainous ungulates and significant populations of galliforms, carnivores such as snow leopards.

Nanda Devi National Park is located around 7,816 meters (25,643 ft) around the peak of Nanda Devi in ​​the state of Uttarakhand in northern India, which was established in 1982. It was inscribed by UNESCO into a World Heritage Site in 1988, with the Valley of Flowers National Park in the northwest.

The sanctuary can be divided into two parts, internal and external. Together, they are surrounded by the main sanctuary wall, forming a roughly square outline with high, continuous ridges towards the north, east, and south. Towards the west, lower but still impressive ridges from the north and south fall towards the sage Ganga gorge, which leads the sanctuary to the west.

The inner sanctuary occupies approximately two-thirds of the eastern region of the total area, and includes Nanda Devi and the peak’s two major glaciers, the northern (north) sage glacier and the southern (south) sage glacier. They are fed by the small northern Nanda Devi and South Nanda Devi glaciers respectively. The region was already inhabited by Aryanic, Mongolian and Himalayan indigenous peoples according to the Vedas and natural history, but through the Sage Gorge in 1934, Eric Shipton and H.W.

The outer sanctuary occupies the western third of the total sanctuary, and is separated from the inner sanctum by higher ranges, through which the sage Ganges flows. It is divided into two parts by the sage Ganga; To the north is the Ramani Glacier, which flows down the slopes of Doonagiri and Changbang, and to the south is the Trishul Glacier, which flows from the peak of the same name. This part of the sanctuary is accessible to the outdoors (although 4,000 meters (13,000 ft) need to pass the pass). The first serious climbing expedition to pass through the outer sanctuary, T.G. Longstaff, who climbed Trishul I in 1907 through a glacier of the same name.

The valley is believed to have been discovered in 1931, when three British mountaineers – led by Frank S Smythe – lost their way and chanced upon this spectacular valley. Attracted by the beauty of this place they named it the “Valley of Flowers”.

As the name suggests, Valley of Flowers is a destination where nature blossoms in full glory and offers a breathtaking experience. Exotic flowers (more than 600 species) such as orchids, poppies, primula, marigold, daisies and anemones are an attractive spectacle. Sub-alpine forests cover parts of the area of ​​birch and rhododendron parks. A trip to the valley offers fascinating views such as waterfalls and wild streams. Situated at an elevation of about 3,700 meters above sea level, this valley is also home to rare and amazing wildlife species like gray langur, flying squirrel, Himalayan mongoose, and black bear, red fox, lime butterfly. Snow Leopard and Himalayan Monal, to name a few.

Frequently Asked Questions About Nanda Devi and Valley of Flowers

Q. Is Nanda Devi National Park and Valley of Flowers the same?

Q. Where is Nanda Devi and Valley of Flowers National Park located?

A – Nanda Devi and Valley of Flowers National Park are located in the north Indian state of Uttarakhand. Separated over a distance of 20 km, the two parks represent two distinct physical features.

Q. The national park of which country is called the Valley of Flowers?

A – Valley of Flowers National Park is an Indian national park, located in northern Chamoli and Pithoragarh in the state of Uttarakhand and is known for its diversity of endemic alpine flowers and flora.

Q. Who discovered the valley of flowers?

A – The Valley of Flowers, located at an altitude of 12,000 feet, was discovered accidentally by climbers Frank S. Smith, Eric Shippton and RL Holdsworth in 1931 when they were returning after an expedition to Mount Kemet.

Q. What is Nanda Devi famous for?

A – Nanda Devi National Park is famous for its remote hilly forest, which dominates India’s second highest mountain at 7,817 meters and is protected on all sides by spectacular topographic features including glaciers, moraines and alpine meadows.

A – Barring a few exceptions, such as campaigns sponsored by the military or the IMF, no one is allowed to climb or locate Nanda Devi, allegedly for environmental reasons. The mountain and the surrounding Nanda Devi Sanctuary were closed for the expedition.

Q. What is unique about the Valley of Flowers?

A – The Valley of Flowers is famous for its outstanding natural beauty, endangered animals and endemic alpine flowers. This valley comes under the category of National Park of India. It is spread over an area of about 88 sq km. Beautiful waterfalls, landscapes and grasslands add more stars to the beauty of the Valley of Flowers.

Q. How was the Valley of Flowers named?

A – Valley of Flowers National Park is located in the Western Himalayas, an Indian National Park in the state of Uttarakhand. The region is quite diverse and got its name because the valley is covered with vast expanses and grasslands of endemic alpine flowers (pink shade flowers).

Q. How can I go to Nanda Devi National Park?

Q. Where is Nanda Devi Valley?

A – Nanda Devi National Park is located in the eastern Uttaranchal state, near the Tibetan border in the Garhwal (western) Himalayas, 300 km northeast of Delhi. The main entrance to the park is 25 km from Joshimath township and 31 km east through Lata and Tolma villages.

Q. Can we live in a valley of flowers?

A – Being located in a protected wildlife area, no one is allowed to stay for the night in the Valley of Flowers, so there is no accommodation in the park. Therefore, one has to go back to Ghangharia or Govindghat to find accommodation in a single day.

Q. What is the best time to visit Valley of Flowers?

A – Entrance to the Valley of Flowers opens at 7.00 am daily and the last entry is done by 2.00 pm. You should start back around 1 pm to reach back by 5.00 pm. Although the valley is beautiful in May, June and September. But July and August are the most preferred months for maximum number of flowers.

Q. Is the Valley of Flowers Worth Visiting?

A – The Valley of Flowers is covered in the cradle of the majestic Himalayas and is therefore one of the best places to admire these powerful “defenders”. The mountains surrounding the Valley of Flowers also border China and Nepal, while it is surrounded on all sides by incredible Zanskar and other great Himalayan peaks.

A – The nearest airport to Nanda Devi National Park is the Jolly Grant Airport of Dehradun which is 295 km away. From here you can hire a private taxi or board a local bus to reach Joshimath. After reaching this point, you have to trek to the park for about 13.5 km from one side.