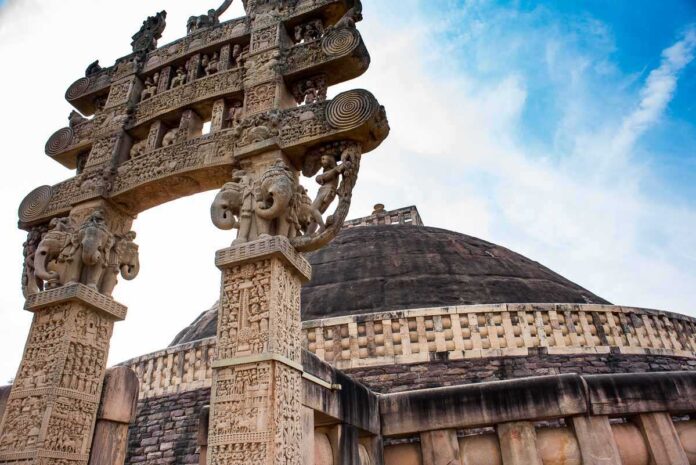 Buddhist Monuments at Sanchi – It was the embrace of Buddhism of the Indian Emperor Ashoka in the third century BCE that transformed it into one of the major religions of the world. Here in Sanchi, you can see the greatest tribute made by him to his new faith – a huge stupa containing the relics of the Buddha himself. Intricately carved stone artifacts that tell historical stories help make Sanchi’s Great Stupa one of the wonders of the ancient world.

Without Emperor Ashoka, Buddhism would probably never have had such a dramatic impact around the world. In the third century BCE, the Indian ruler adopted the new religion and spread it over his vast territory. He saw this as a way of bringing peace to his people, but his decision had far reaching consequences. It gave momentum and authority to a religious movement that would spread to every corner of the world over the next two millennia.

Nearly 400 years after the birth of Buddha in Lumbini, Buddhism was being practiced in the Ganges Valley by a relatively small group of followers, who were divided into various schools. Emperor Ashoka was attracted to the teachings of the Buddha, which he spread, especially social justice.

Historical sources tell us that Ashoka was shocked by the huge number of people who died in the war he waged. In Buddhism, he saw a new path where he could win the mind and heart with morality rather than weapons. He believed that if all his subjects followed this peaceful religion, they could end the conflict on their land.

To help spread his message across the Indian subcontinent, Ashoka built stupas and other monuments with inscriptions. Over the centuries, most have been badly damaged or destroyed – although some still exist. The Great Stupa at Sanchi is not only the best preserved of them all, but also the most beautiful. It is not only a testament to Ashoka’s story, but it is still worshiped as an incredible masterpiece of ancient art.

The Great Stupa at Sanchi is situated on a peaceful hilltop, which is easily viewable from the surrounding areas without looking at the landscape. It is located at a distance of about 10 km from the city of Vidisha, which was a prosperous trading town at the time of the construction of the stupa. Perhaps even more importantly, Vidisha is also called the hometown of a woman whom Ashoka fell in love with. She could not return to the capital to become his queen and is believed to have influenced her decision to pay tribute to the place.

The dome of the Great Stupa is more than 16 meters high and 36 meters in diameter (it has been expanded over the centuries). Apart from its size, the first thing that impresses you when you arrive is the elaborate rock carvings that beautify the entrance at the four cardinal points. These were added after the death of Emperor Ashoka and show complex scenes including the life of Buddha and the history of Buddhism.

There are small stupas around the great stupa, as well as the remains of later temples and monasteries. After the emperor Ashoka built his memorial here in the third century BCE, it became an important place of worship for many centuries to come. You can see evidence of Buddhist activities here till at least the 12th century AD.

Farther on, there are other important Buddhist monuments that are readily available from Sanchi, including the impressive stupas of Satadhara and Sonari. Despite rising and falling dominance of various religions, the region remained an important center of trade and faith.

When you travel in the area around Sanchi and Bhopal city, you will find other important sites along with stunning works of art. Thousands of years before the birth of Buddha, people living here or Ashoka embraced his message and spread it to the world, there are also artifacts made on rocks.

The Artwork of Sanchi

The four entrances to the Great Stupa are famous for the beauty of their intricate carvings – and knowing what they represent provides a deeper understanding of the Sanchi site. Entrances, or ‘toranas’, were built in the first century BCE and sponsored by various worshipers. Each was engraved at different times by different craftsmen, giving them a slightly different style.

Each entrance has two square pillars with four lions, elephants, or pot-covered dwarfs, which support a large grid with three architectures. Among the architecture are the figures of horsemen and elephants. But it is the architecture itself that gives us the most with incredibly detailed views carved into the rock.

The southern entrance shows an image of the stupa of Ramgram near Lumbini, the only stupa with the original relics of the Buddha which was not opened by Emperor Ashoka. It also depicts scenes from the siege of Kushinagar and the story of the previous incarnation of Buddha, Chhaddant Jataka.

The western entrance also shows a scene of the siege of Kushinagar and another part of the story of the Chhaddant Jataka. It also has engravings depicting Buddha’s first sermon and his enlightenment.

Walking around the northern entrance, there are scenes depicting various incarnations of the Buddha, including the continuation of the story of the Chadant Jataka. There is also a depiction of an incident leading to his enlightenment, when Sujatha gave him food.

At the eastern entrance, you can see pictures of Buddha exiting his home in Kapilavastu to begin his journey of enlightenment. Importantly, there is also a scene of Emperor Ashoka visiting the Bodhi tree where knowledge was attained. This carving, which comes at least a hundred years after the construction of the great stupa, is an important tribute to both the Buddha and the man who adopted his teachings so passionately.

The stupas and monasteries at Sanchi formed a thriving Buddhist community of monks and supporters. As more and more people came over the centuries, other settlements were established nearby, and the area became a center of spiritual activity.

About 17 km from Sanchi was one of the most important settlements in Satdhara. There used to be about 30 stupas and three monasteries here and around 100 monks lived in Satdhara at its peak. While the main stupa was probably originally built during Ashoka’s rule, the rest of the site would have been built later.

You can see evidence of other stupas and settlements at nearby sites like Sonari, Andher and Murrelkhurd. They show that the immediate effects of Emperor Ashoka’s adoption of Buddhism were more than just ceremonial. He inspired many of his people to live their lives according to the teachings of Buddha.

The flow of faith

Although Emperor Ashoka achieved his objective of making Buddhism the dominant religion in the region, it did not last forever. By the 13th century AD, the community of Sanchi was virtually abandoned and many monuments were dilapidated. It was not until the 19th century that the site would be rediscovered by people interested in restoring it.

Meanwhile, a growing Hindu community was establishing centers of faith in the region, many of which are still covered with beautiful artwork. Around the same time Jain places of worship were also established. Later, the Mughal Empire brought Islam to the region and mosques were rebuilt or built by modifying existing temples.

Some of the most important sites of all these religions have been preserved and visitors get a chance to witness the development of faith in the area around Sanchi in the millennium after its foundation. Places of worship are not only beautiful to see, they are also associated with deep historical and cultural stories.

The legacy of Emperor Ashoka is not measured purely by the spread of Buddhism around the world and its strength today. He also nurtured an artistic and spiritual environment around Sanchi that has developed over many centuries and we have a rich collection of historical treasures.

The nearest airport is in Bhopal city, Raja Bhoj Airport. Sanchi is 55 km northeast of Bhopal Airport, which is well connected to other airports like Mumbai, Ahmedabad, Raipur and Delhi.

The nearest railway station is Bhopal, which is also an important junction of the West Central Railway. It is also the terminus of Shatabdi Express, which runs daily between Delhi and Bhopal. Various express trains run between Bhopal and cities like Delhi, Mumbai, Agra, Gwalior, Jhansi and Ujjain. One can reach Bhopal by train and take a bus / car to Sanchi from there.

Sanchi is just an hour (46 km) by car from Bhopal and a 20-minute drive from Vidisha (10 km). Various tour operators provide private taxis and cabs.

Sanchi can be visited throughout the year, but it is best to visit here in the months of July to April.

A – The Great Stupa at Sanchi, India. The Great Stupa (also known as Stupa No.1) was originally built by the Mauryan Emperor Ashoka in the 3rd century BCE and is believed to contain Buddha’s ashes.

Q. What is Sanchi famous for?

A – Sanchi is famous in the world for third century BC stupas, monolithic Ashoka pillars, temples, monasteries and sculptural wealth. By the 12th century A.D.

Q. Where are the Buddhist monuments located?

A – On a hill overlooking the plain and about 40 km from Bhopal, the site of Sanchi consists of a group of Buddhist monuments (monolithic pillars, palaces, temples and monasteries) all in various states of preservation, most of which are in the other and Are of the first century. It is the oldest Buddhist sanctuary in BC

A – It was the embrace of Buddhism of the Indian Emperor Ashoka in the third century BCE that transformed it into one of the major religions of the world. Here in Sanchi, you can see the greatest tribute made by him to his new faith – a huge stupa containing the relics of the Buddha himself.

Q. What are the two main features of Sanchi Stupa?

A – The Sanchi Stupa has two important features: 1. The Stupa is a semi-circular solid dome-like structure with Buddha relics such as hair, teeth and bones. 2. The stupas of Sanchi, Bharhut and Amravati are notable specimens of art surviving till date.

Q. What is inside a stupa?

A – The Stupa at Sanchi is an excellent example of the development of Buddhist architecture and sculpture from the third century BCE to the twelfth century AD. The site of Sanchi was discovered by General Taylor in the year 1818 and in 1919 an archaeological museum was established by Sir John Marshall.

Q. Why was the stupa built?

A – Buddhist stupas were originally built to contain the mortal remains of the historical Buddha and his associates and are almost always found at the sacred sites of Buddhism. Stupas were also built by the followers of Jainism in memory of their saints.

Q. When was Sanchi discovered?

A – Sanchi, famous for its stone stupas with rich stone railings and archway with descriptions of the life of the Buddha, was discovered as ruins in 1818 AD.