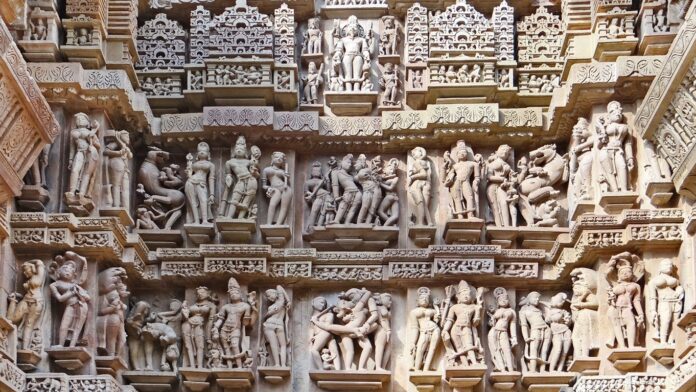 Khajuraho, located in Chhatarpur district of Madhya Pradesh, is a pride of Indian architectural grandeur. It was built during the reign of the Chandela dynasty, which was at its height during the period 950 to 1050. The temple complex was described as an assemblage of 85 temples in earlier days, although today only 25 temples are found. The temples are considered to be the greatest masterpiece of ancient Indian art.

Although the monuments are dedicated to two different religions, they share a common typology. Stunningly decorated buildings, ie, thighs are installed on a tall structure. The forests are again enclosed with several registers of engraved panels, on which open-work galleries are installed. These jangas are crowned by a series of towers with curvinier contros and Sikhs.

All these towers are unique features of temples in the Nagra style and symbolize the Kailash Parvat of Kailash Parvat. The unique plan of the temple includes an entrance gate, pavilion, sanctum sanctorum, apart from separate attachments.

The world famous tourist destination Khajuraho is well connected to major cities of the country by air, train and road.

BY AIR – For tourists coming from abroad, Delhi is the nearest international airport. On reaching Delhi, a connecting flight will take you to Khajuraho Airport which is only 2 km from the city.

BY RAIL – Khajuraho has its own railway station named after the famous temple. The railway station is about 5 km from the popular tourist destinations of Khajuraho. Taxis are available on a fare basis from the temple to the campus.

BY ROAD – There are several types of buses available that one can choose from various parts of North India to reach Khajuraho.

Reasons for Inscription: According to criteria 1 and 2 of the operational guidelines for the implementation of the World Heritage Convention, any monument that exhibits extraordinary human creativity is to be awarded the title of the World Heritage Site. Khajuraho, through the grandeur of its architecture, exhibits the height of artistic excellence reached by the architects of a particular time in ancient India. Unlike other Hindu temples, Khajuraho draws attention not to its presiding deities or religious significance but to the incredible carvings and designs painted on the walls of the temple.

The story behind the name

According to local legends, there is an interesting story of how and why the temples are called.

The Chandela rulers who started building the temples surrounded the entire area with a wall. The wall had about eight gates which were mainly used for entry or exit. It is said that each gate was lowered on both sides of the palm and palm trees. This name was derived from these trees and the temples were called “Khajura-vahika”. In Hindi language ‘Khajura’ means ‘Khajur’ and ‘Vahika’ means ‘Asar’. The date palm tree is found in abundance in this area.

Khajuraho temples were built by the Chandelas while they ruled the region. Over the centuries, the Chandela Empire began to decline and, as a result, these magnificent structures were neglected. Worse, they were greatly weakened by the threats from the 13th to 18th centuries of invaders and rulers who destroyed many temples.

Only 20 of the original 85 stand today. Due to their remote location and isolation, some temples were spared. They were covered with overflow of flora and forests for centuries. It was only in the last century that these were rediscovered and later restored and preserved.

Q. Who built the Khajuraho temple?

A – The temples at Khajuraho were constructed during the Chandela dynasty, which reached its upazit between 950 and 1050. There are only 20 temples left; They fall into three different groups and belong to two different religions – Hinduism and Jainism. They strike an ideal balance between architecture and sculpture.

Q. Which god is there in Khajuraho temple?

A – Shiv, The group of monuments is a group of Hindu temples and Jain temples in Chhatarpur district, India, about 175 km southeast of Jhansi. They are a UNESCO World Heritage Site.

Q. What is the meaning of Khajuraho temple?

A – According to legends, the temples had their gates, two golden palm trees. And similarly the word Khajuraho was derived from ‘Khajoor’, which means date.

Q. What is Khajuraho temple famous for?

Q. Is Khajuraho worth visiting?

A – Yes, it is worth a visit. It is one of the finest tourist destinations in India, as it offers a lot of beauty in diversity.

Q. How can I go to Khajuraho from Delhi?

A – There is a regular train from Khajuraho to New Delhi called Khajuraho-Hazrat Nizamuddin Express, which takes about 10 to 11 hours to reach Khajuraho. The second major railway station connecting Khajuraho to other Indian cities is at Mahoba, about 75 km away.

Q. Which is the first place of Hindu stone idol?

A – Bharhut Sculpture, an Indian sculpture of the Sunga period (mid-second century CE), which decorated the great stupas, or relic mounds of Bharhut, in the state of Madhya Pradesh.

Q. How many days are sufficient for Khajuraho?

A – A day or two of travel is enough to see the temple sites in Khajuraho, although the natural attractions around Reneh Falls, Pandav Falls, Panna tiger Reserve, etc. require more time to see.

Q. How far is Orchha from Khajuraho?

A – The distance between Khajuraho and Orchha by road is 172 KM.

Q. How can I visit Khajuraho temple?

A – The easiest way to reach is by air, the airport is only a 2-minute drive from the city. And, you can take a bus from Chhatarpur. The city is 44 km from Khajuraho district Chhatarpur, 281 km from Gwalior, 375 km from Bhopal, 565 km from Indore, 355 km from Ranchi.