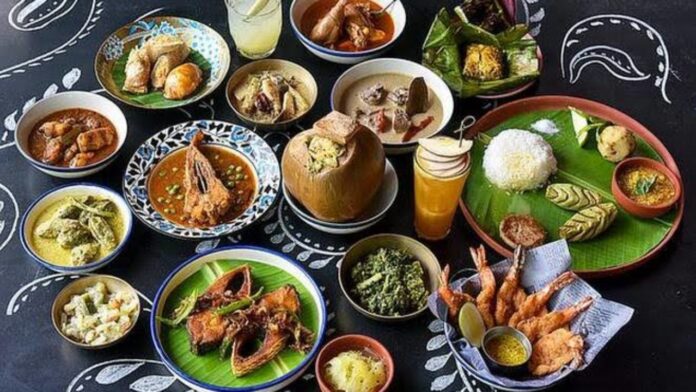 There are some outstanding Bengali restaurants in Kolkata, where you can enjoy authentic and delicious tasting Bengali cuisine. A hit in the City of Joy, many of these restaurants has gone on to open up branches all over India. Seafood lovers will really love seafood dominated Bengali food. To get the most from your dining experience, keep in mind how Bengalis eat their food to preserve the subtle flavors — vegetarian dishes first, followed by fish, and then meat.

6 Ballygunge Place was founded in 2003 to fill the gap in the market for standalone Bengali specialty restaurants in Kolkata. The original one is located in a white, century-old, and character-filled converted bungalow in upmarket Ballygunge. Its dishes were developed from scouring renowned cookbooks, including those containing traditional recipes from Rabindranath Tagore’s family.

This relatively new and memorable Bengali cuisine restaurant is named after a hit 1961 Bengali romantic drama starring Suchitra Sen and Uttam Kumar. Its decor, featuring movie stills and old portraits of the stars, reflects the theme. Soft romantic music from Bengali cinema plays in the background as well. The restaurant was founded by two chefs (Ranjan Biswas and Swarup Mondal) who have 10 years of experience working in luxury hotels. Their menu combines traditional and innovative fusion dishes.

For something deliciously different, try Bohemian’s contemporary Bengali fusion food. Chef Joy Bannerjee, who was previously Head Chef at Oh! Calcutta uses distinctly Bengali spices and flavors in his cooking — but with a twist! The menu has tweaked traditional fare plus a range of innovative global dishes, including many vegetarian options.

If you’ve got money to splurge on eating out, you won’t be disappointed with Oh! Calcutta. This award-winning, fine dining restaurant can now be found in major cities across India. It aims to recreate dishes from traditional old-style Bengali recipes, selected through painstaking research. The environment is elegant, and there’s a private dining area as well.

Also in the New Market area and serving primarily Dhakai Bangladeshi cuisine, The Bhoj Company opened in 2012. It’s a small restaurant that’s developed a loyal local following. The food is affordable, super authentic and the servings are generous. Service could be better though.

Aaheli at The Peerless Inn

The elegant and iconic fine dining Aaheli has been serving authentic Bengali cuisine for decades and is popular with both locals and foreign visitors. It offers a wide variety of dishes from all over Bengal, with a focus on bringing back exclusive lost “Zamindari cuisine”, the food of aristocratic landowners. Live Bengali music and waiters clad in traditional attire enhance the ambiance. Do note that alcohol is not served in the restaurant (although it is available elsewhere in the hotel).

In the New Market area and serving authentic Dhakai Bangladeshi cuisine, award-winning Kasturi is an inexpensive but delicious option. Established in 1994, the restaurant pioneered this type of cuisine in the city. Ignore the uninspiring decor, the food is what counts there. And, the crowded dining room is a testament to this.

Don’t have much time to eat? Bhojohori Manna is where you should head to get tasty Bengali cuisine on the run. And with outlets all over Kolkata, you’re sure to find one conveniently close by. The restaurant is named after a famous Bengali track, sung by Manna Dey, for a film made in the 70s. The track “ami sri sri bhojohri manna…” revolves around a magical cook who traveled to many lands and acquired a unique culinary style of his own.

Born out of our deep passion for cooking and a love of authentic Bengal cuisine, Lokaahar opened its doors in October 2015 in a lane near South City Mall. It’s one of a flurry of new Bengali restaurants in Kolkata and is indeed one of the better ones. This homely standalone restaurant has quickly become renowned for the consistently good quality of its cuisine. The owners have converted the ground floor of their house into a restaurant. It’s a small place, with seating space for up to 25 people. Apart from the yummy food, the restaurant is noteworthy for its rustic rural theme. The owners have focused on highlighting rural life and promoting artisans from various districts of Bengal by selling their handicrafts. The menu is also derived from dishes found in the far reaches of greater Bengal. Best of all, it’s budget-friendly!

Kewpies Kitchen started as an intimate, unassuming, family-run restaurant over a decade ago and has become a famed place to dine in Kolkata. Located in the owner’s home, it seats just 50 people. Sadly, the standard has reportedly dropped in recent years but if you want reasonably priced Bengali food in a unique environment, do give it a try.

Q. Which is the Best Bengali Restaurant in Kolkata for Lunch ?

A – Discover the best restaurants in Kolkata city with our list of delightful culinary experiences in town!

Q. Which is the Best Bengali Restaurants In Kolkata Park street?

A – Check out the list of all best Bengali restaurants near you in Park Street, Kolkata

Q. Where to find Cheap and best bengali restaurant in kolkata?

Q. Where can you find the Best Bengali buffet lunch in Kolkata ?