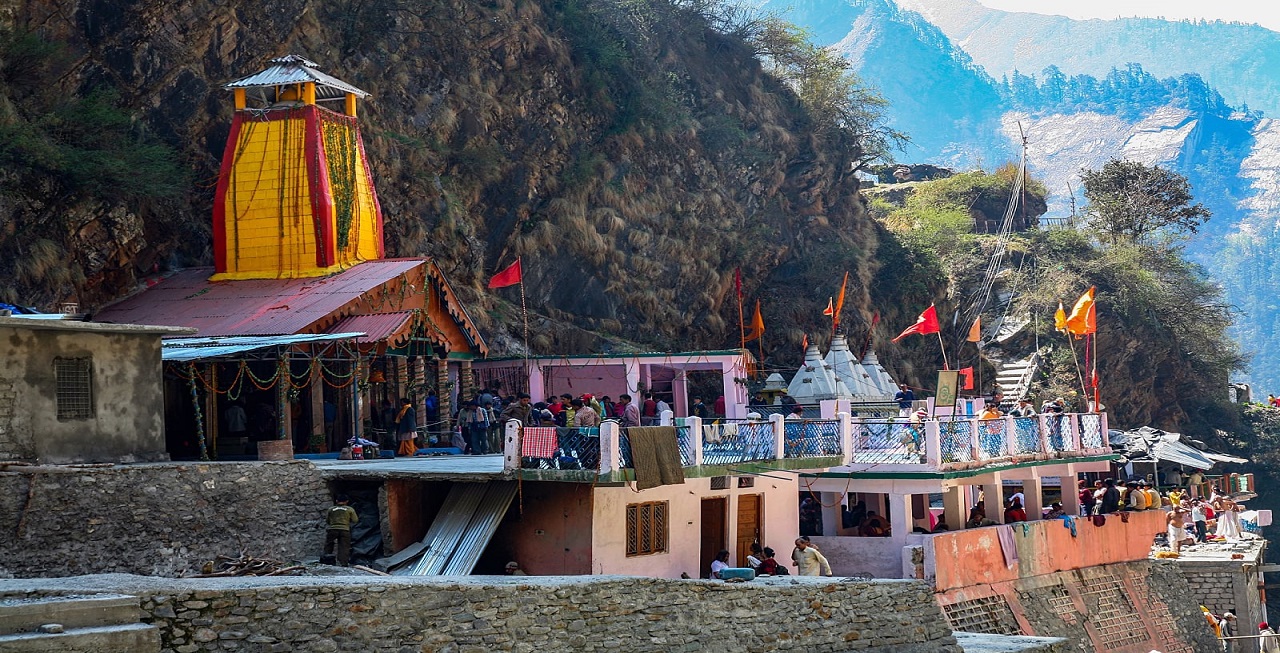 Yamunotri is the origin of the sacred river Yamuna. Famous for its thermal springs and glaciers, it is one of the most important stopovers on the itinerary of the Hindu pilgrim. According to an old legend, Asit Muni, the revered sage, used to reside here. Mountains on all sides flank Yamunotri and the scenic beauty of the place is enough to mesmerize a person. Yamunotri – the origin of the sacred river Yamuna.

Yamunotri is part of the Char Dham Yatra to the famous shrines in the Garhwal region of Uttarakhand. Yamunotri means the source of the Yamuna River, and a temple built near this source is dedicated to Goddess Yamuna. The temple is on the left bank of the river. And like Ganga, Yamuna also has been elevated to the status of divine mother by the Hindus and is believed to have nurtured and developed the Indian civilization.

The shrine at Yamunotri is devoted to the river Goddess, Yamuna. The temple’s existence first came to light in 1816 when a British Army officer named James Frazer chanced upon it. It was then a tiny 3-foot high stone temple. A formal temple was then constructed by the local Tehri kings. Around the mid 19th century Sudharshan Shah, the king of Tehri, built a wooden structure. Later, Pratap Shah rebuilt the temple in stone.

Heavy snow and landslides periodically damage the temple. Towards the end of the 19th century renovation of the temple was done by a descendent of the Jaipur royal family. The last renovation work was completed in 1994. Inside the temple is an idol of Goddess Yamuna carved in black marble stone that is mainly worshipped.

The temple is located approximately 30 kilometers north of Uttarkashi and is perched atop a flank of Bandar Poonch mountain range. Yamunotri temple is situated in the western region of Garhwal Himalayas at an altitude of 3235 meters in Uttarkashi district, Uttarakhand.

Dodi Tal ( ‘Tal’ means a lake) is a high altitude lake at a height of 3307 meters situated amidst pine forests with the backdrop of Darwa Bugyal, a high altitude meadow. It has a serene effect on the mind and body. Dodital gets its name from Dodi, the local name for trout that are found in large numbers in the lake. The serene, tranquil surroundings, gurgling streams, crystal clear water, and dense alpine forests make for an ideal retreat.

North of Uttarkashi and surrounded by dense forests, the Dodi Tal trek is about 60 kilometers long and takes about four days to complete. The trek to Dodi Tal commences from Kalyani and is approachable by road from Uttarkashi. Kalyani to Agoda is a gradual climb through woods, fields and villages on a mule track. The trek from Agoda to Dodi Tal is steep and through thick forests.

Janaki Chatti is 7 kilometers away from Yamunotri. It is well known for its thermal springs. This is the place where all pilgrims have to return for the night halt, the same day because of the extremely limited accommodation options available at Yamunotri. Ponies and dandies can be arranged a day before for negotiating the trek for those unable to cope with trek physically. The thermal springs here offer a spectacular sight and a refreshing bath for the pilgrims.

1 km away from Yamunotri, Kharsali is the last village in the region. Every winter, the idol of goddesses Yamuna and all the priests and the support staff of the Yamunotri temple retreat to this village. There is an old temple here to visit. It is a three-storied temple and has carved stones on the walls. It is a Shiva temple dedicated to the Lord in the form of Someshwar, the God of the intoxicant Soma. The intricate woodwork here is also noteworthy.

There are taxis, ponies and palanquin/palkis to take you around at Hanuman Chatti. The taxis are unmetered and fares have to be negotiated in advance.

Yamunotri is not a big place. It is a small holy place with an area of no more than one square kilometer. Movement is only on foot. There is not much to do around the temple. One can just walk and go a little out in the mountains to enjoy the magnificent views of the valley and the Bandar Poonch range.

Q. What is the route of Char Dham Yatra in Uttarakhand?

Q. What is the best time for Char Dham Yatra?

A. The best time to take the holy Char Dham Yatra in Uttarakhand is from April to June. These months are considered to be the best time because the temperature varies between 7 to 20 degrees Celsius and you won’t face many difficulties along the route.

Q. How can we visit all the shrines for Char Dham Yatra at once?

A. The only possible way to visit all the shrines for Char Dham Yatra at once is by road. There is a strong network of road transport that connects all these places and it is how you will be able to cover all these places at once.

Q. What should I pack for Char Dham Yatra?

A. Pack woolens, a lot of them. It doesn’t matter in which month you plan for the Char Dham Yatra but you should always carry woolens. Carry a fleece jacket, trek pants, a sun cap, comfortable shoes, sunscreen, essential medication, and a first aid kit.

Q. Till which month can we take Char Dham Yatra?

A. The Char Dham Yatra starts in June and goes on till October every year. You should do it at least once in your lifetime.

A. Maharani Guleria of Jaipur built the famous Yamunotri Temple in the 19th Century. This ancient temple still stands strong.

Q. Where is Yamunotri situated?

A. Yamunotri is situated in the Uttarkashi district of Yamunotri which falls in the western part of the Garhwal Himalayas.

Q. How old is Gangotri Temple?

A. The famous Gangotri temple dates back to the 18th century and was built by the popular and powerful Gorkha General, Amar Singh Thapa. It was later re-built by the Maharaja of Jaipur.

Q. From where did Yamuna river originate (Yamuna Origin)?

A – The source of the Yamuna lies on the south-western slope of the Bandarpoch Peaks, at an elevation of 6,387 meters (20,955 ft) in the Yamunotri Glacier, in the Mussoorie Range of the lower Himalayas north of Haridwar in Uttarkashi district of Uttarakhand.

Q. How was the river Yamuna born?

A – Introduction Yamuna river originates from the frozen Champasar lake located in Bandarpuch Glacier at an altitude of 6387 meters (380 59 ′ N 780 27 ′ E) in Uttarakhand’s Har-ki-Doon mountain range.

Q. Why is Yamuna called Jamuna?

A – According to Hindu mythology, Yamuna is a sacred river of India. The Yamuna River, also known as the Jamuna, originates from the Yamunotri Glacier, which is located at an elevation of 6,387 meters on the southwestern slopes of the Bandarpooch Mountains in the highest region of the lower Himalayas in Uttarakhand.