Humayun’s Tomb – The Garden of Tombs in Delhi 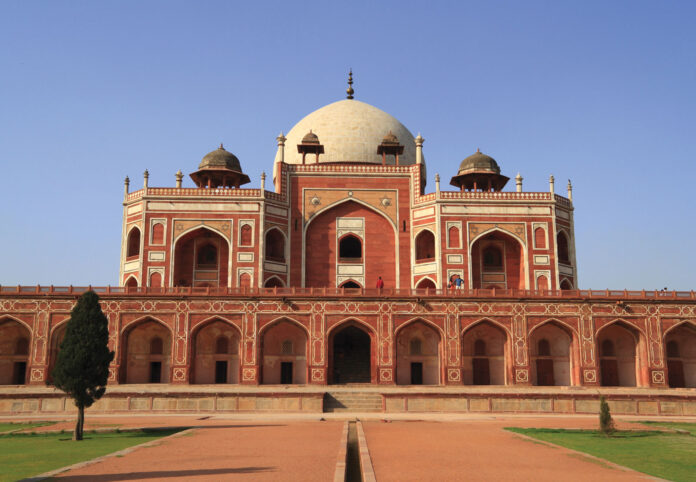 The last refuge of Mughal Emperor Humayun is reminiscent of a stately palace rather than a mausoleum. Located in the eastern part of Dehli, Humayun’s Tomb is one of the best preserved Mughal monuments. This enchanted tomb is the first example of Mughal architecture in India.

Humayun’s Tomb inspired the construction of the more famous Taj Mahal after a century from its construction. In terms of the history of architecture, the building is a unique link between Gur Amir, where Humayun’s ancestor Tamerlane is buried, and the tomb of his grandson Shah Jahan, ie the Taj Mahal. The tomb was built for the initiative of his widow Hamida Bano Begum, who began building a mausoleum for her deceased husband in 1565, nine years after her death. Construction was finished in 1572.

The architecture of the mausoleum is strongly influenced by Persian architecture. The architect of the building, Mirak Mirza Gaias, himself was of Persian origin. Gaiyas built the mausoleum in the center of the Persian style Chaharbag garden (translated from Persian – four gardens) with a quadrilateral form. A garden divided into four main parts by a walkway or running water resembles the paradise garden described in the Quran. These four main parts are alternately separated by channels into 36 parts.

From the 16th to the 19th century, this garden gradually filled up with the graves of Humayun’s descendants and his entourage. Many Mughal emperors are also buried inside Humayun’s tomb. The Tomb has earned the title of graveyard of the Mughal dynasty. There are not so many graves of Mughal emperors and their relatives in India or any other cemetery. In addition, Humayun’s tomb is the first garden-tomb of the Indian subcontinent.

The tomb stands on a huge platform whose height is up to 7 meters. The building is constructed of red sandstone, while the tomb itself is made of yellow and black marble. The two-storied mausoleum is crowned with a white Persian-style marble dome that seems weightless and impossible. The Tomb has a height of 47 meters and a width of 91 meters.

The lower level of this rectangular building is decorated with beautiful arches, which are located around the entire perimeter of the building. The ruler’s tomb is situated in the center of the upper tier in a large room decorated with several rows of arched windows. The central chamber is octagonal with corner-chambers containing graves of other members of the royal family. The original tomb of the emperor is on the basement floor. The tomb architecture details both Persian architecture and Indian architectural traditions.

The Persian influence can be seen in the arched alcoves, corridors and the high double dome, while Indian traditions have inspired the creation of the kiosks, which give it a pyramidal outline from distance.

Q. Who built Humayun’s tomb and where is it located?

A – In many ways, this magnificent red and white sandstone building is as magnificent as the famous ‘memorial of love’ in Agra. This historical monument was built by Humayun’s queen Hamida Banu Begum (Haji Begum) at a cost of about 15 lakhs. It is believed that he designed the mausoleum.

Q. Why was Humayun’s Tomb built?

A – The tomb was built for the initiative of his widow Hamida Bano Begum, who began building a mausoleum for her deceased husband in 1565, nine years after her death. Construction was completed in 1572. The architecture of the mausoleum is strongly influenced by Persian architecture.

Q. Who is buried in Humayun’s Tomb?

A – Humayun’s garden-mausoleum is also known as the ‘hostel of the Mughals’ as more than 150 Mughal family members are buried in the chambers. The mausoleum is located at an extremely important archaeological site centered on the pilgrimage site of the 14th-century Sufi saint Hazrat Nizamuddin Auliya.

Q. Is there a ticket to Humayun’s Tomb?

A – Humayun’s Tomb entry ticket for Indian travelers is 35 rupees. For visitors from BIMSTEC and SAARC countries, the entry ticket to The Tomb remains the same at Rs 35 each. However, if you are an international visitor, Humayun’s Tomb ticket costs INR 550.

Q. In which year UNESCO declared Humayun’s Tomb as one of the World Heritage Monuments?

A – Humayun’s Tomb is a cultural UNESCO World Heritage Site in India. It is located in Nizamuddin East in Delhi and was inscribed in 1993. It is a huge mausoleum that features Mughal architecture.

Q. What is the significance of Humayun’s Tomb?

A – Built in 1570, the tomb is of special cultural importance as it was the first garden-tomb on the Indian subcontinent. Its unique beauty is said to have inspired many major architectural innovations, culminating in the construction of the unique Taj Mahal.

Q. What are the special features of Humayun’s Tomb?

A – This structure is known for its unique architecture, as it is octagonal on the outside while square within; its ceiling is decorated with painted and incised plaster, it has a high neck dome and shows a conspicuous absence of a double dome feature, common to tombs of the period.