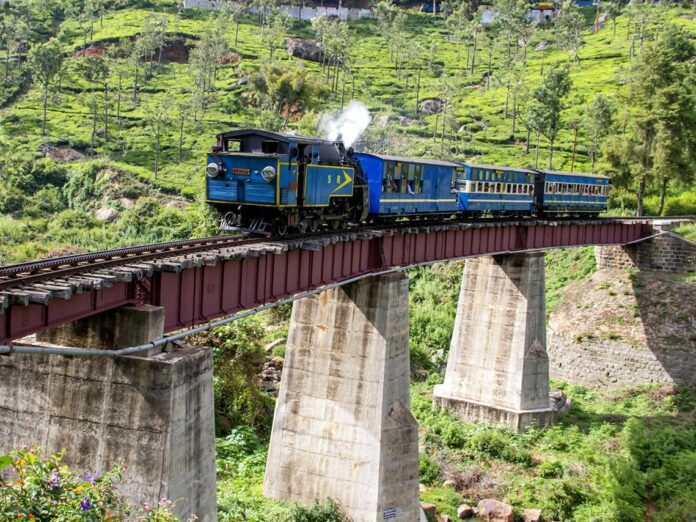 Mountain Railways Of India – The site consists of three railways. The Darjeeling Himalayan Railway was the first, and is still the most outstanding example of a hill passenger railway. Opened in 1881, its design applies bold and simple engineering solutions to the problem of establishing an effective rail link in a mountainous area of ​​great beauty.

Construction of the Nilgiri Mountain Railway, a 46 km long meter-gauge single-track railway in the state of Tamil Nadu was first proposed in 1854, but due to the difficulty of the hill location, the work only started in 1891 and was completed in 1908. Situated at an altitude of 326 meters to 2,203 meters, this railway represented the latest technology of the time.

Kalka Shimla Railway, a 96-km long, single-track working rail link, built in the mid-19th century to serve the highland city of Shimla, through technical and physical efforts to isolate the hill population through railways Is a symbol of All three railways are still fully operational.

The Mountain Railway of India consists of three railways: Darjeeling Himalayan Railway situated in the foothills of the Himalayas in West Bengal (Northeast India), covering an area of ​​5.34 hectares. India) has an area of ​​4.59 hectares. And the Kalka Shimla Railway is situated in an area of ​​79.06 hectares in the foothills of the Himalayas of Himachal Pradesh (North West India). The three railways are still fully functional and operational.

Mountain railway of India are excellent examples of hill rails. Opened between 1881 and 1908, they implemented bold and simple engineering solutions to the problem of establishing an effective rail link in a mountainous area of ​​great beauty. They are still fully operational as a living example of the engineering enterprise of the late 19th and early 20th centuries.

The Darjeeling Himalayan Railway has an 88.48 km 2 ft (0.610 m) gauge track that connects New Jalpaiguri to Darjeeling, which passes through Ghum at an elevation of 2258 m. The innovative design includes six zigzag reverses and three loops with a ruling gradient of 1:31.

Construction of the Nilgiri Mountain Railway of India, a 45.88-kilometer-long meter-gauge single-track railway was first proposed in 1854, but due to the difficulty of the hill location, the work only began in 1891 and was completed in 1908. This railway, scaling 326 m to 2,203 m elevation, represents the latest technology at the time and uses unique rack and pinion traction arrangements to negotiate steep gradients.

Kalka Shimla Railway, a 96.6 km long, single track working rail link built in the mid-19th century to serve the highland city of Shimla, technical and physical efforts to isolate the mountainous population through railways Is a symbol of The world’s tallest multi-arch gallery bridge and KSR’s world’s longest tunnel (at the time of construction) were a testimony to the superb engineering skills applied to realize this dream.

These railways are excellent examples of new transport systems built in inaccessible areas, which had a great impact on the social and economic development of their respective regions.

Declared as a UNESCO World Heritage Site in 1999, the Darjeeling Himalayan Railway (DHR), affectionately known as the Toy Train, started in 1881 to make the transport of rice and other commodities easier and more cost-effective. I went. Now, it has become the focal point of Darjeeling’s tourism industry, and is still one of the most outstanding examples of engineering in a challenging terrain. The track on which the train runs is only 600 mm wide!

The 87 km route offers an enchanting view of the hills and dense forests that run between New Jalpaiguri and Darjeeling. The Darjeeling Himalayan Railway has been featured in many films such as Parineeta, Barfi, etc. One should get direct experience of this industrial miracle in the lap of nature.

One of the most popular railway lines in the hills, the Kalka Shimla Railway has a toy train that offers riders a unique experience. Strolling through the mighty Himalayas, the train takes one through picturesque landscapes, thrilling twists and turns and panoramic landscapes with oak and deodar trees. The train also passes through the beautiful Solan city and is considered one of the best stops.

The Nilgiri rail line was first started from Mettupalayam to Coonoor in 1899 and was eventually extended to Udhagamandalam (old name of Ootacamund) in 1908. Toy trains carry passengers from 1,069 feet to a height of 7,228 feet on this line. This rail network is one of the fastest in Asia. The line covers a total distance of 48 km from Mettupalayam to Utakamund in five hours, covering Keller, Coonoor, Wellington and Lovedale on the way. The route is very scenic and breathtaking. The view is particularly captivating due to the surrounding rocky terrain, valleys and lush green hills.

Q. How many mountain railways are there in India?

A – The Mountain Railway of India consists of three railways:

Q. Which railway in India is a World Heritage Site?

Q. Why is a toy train used on the mountains?

A – Toy trains in India are small trains that run on historic mountain railway lines, built by the British in the late 19th and early 20th centuries to provide access to their hill settlements.

Q. Why is the Himalayan region devoid of railways?

Q. Which is the best toy train in India?

A – Top 3 Toy Train Journeys to Experience in India

Q. How can I get the Nilgiri Mountain Railway ticket?

A – Currently, there is a toy train from Mettupalayam (MTP) and Udhagamandalam (Ooty-UAM) which starts from MTP at 07.10 am and reaches UAM at 12.00 noon. Tickets can be booked from the Indian Railways / IRCTC website or directly from the PRS counters located at the railway stations.

A – There is a huge demand for Ooty toy train rides, so it is highly recommended to book your tickets in advance by booking online through the Indian Railways website www.irctc.co.in or purchasing them from the station ticket counter.

Q. How long is the Nilgiri Mountain Railway?

Q. Does the Ooty toy train have a toilet?

A – Unlike other trains, the toy train has no toilet facilities. But, you will get some time in each stop. The only thing is that you may have to do it a little early. In Coonoor, the train stops for about 15 minutes.

Q. How many tunnels are there in the Kalka-Shimla railway?

A – The railway was constructed during the British Raj in 1898 to connect the summer capital of India to Shimla with the rest of the Indian railway system. During its construction, 107 tunnels and 864 bridges were constructed along the route.

Q. Who built the Shimla Railway?

A – NJP to Darjeeling train is currently suspended although DHR is operational between Kurseong and Darjeeling as well as for the Joy Ride (Darjeeling – Ghum – Darjeeling).

Q. How can I book Darjeeling Himalayan railway ticket?

A – You can book ticket by simply visiting your nearest Computerized Reservation Counter in India OR you can log in www.irctc.co.in for online booking. If you do not have the opportunity to book, never mind, just drop in DHR station and know how to book your ticket.

Q. Is Darjeeling toy train worth it?

A – The toy train joyride can be touted by many as a must do on any Darjeeling trip. Beware! it is not worth the money you will spend on this two hour drag. The Batasia loop enroute is still a better bet where the train halts for about 10 mins.