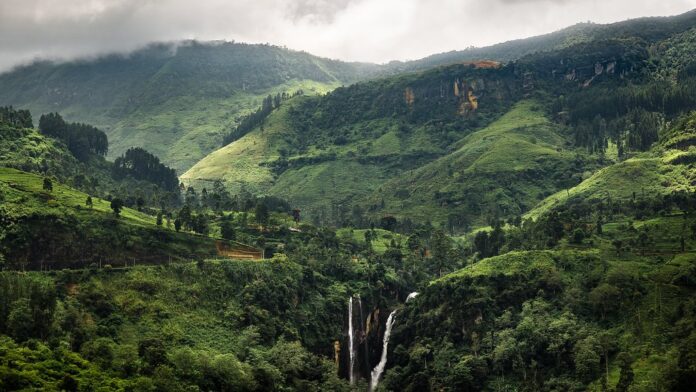 The Central Highlands of Sri Lanka is a protected land area rich in natural beauty located in the south central part of Sri Lanka. The Peak Wilderness Protected Area, the Horton Plains National Park, and the Knuckles Conservation Forest are the main three areas covered by the property, where the land rises 8,000 feet above sea level. The Central Highlands of Sri Lanka is home to an extraordinary range of flora and fauna, including many endangered species such as the western purple-faced langur, Horton Plains slender loris and the Sri Lankan panther, which is another reason why UNESCO has named it a World Heritage Site.

The Central Highlands provide a microcosm of all types of climatic conditions in Sri Lanka from extremely humid to almost dry. The highland forest areas are extremely wet, with an average annual rainfall of 5000 mm, while the lowland areas are much arid, with an average annual rainfall of less than 2500 mm. Frost occurs in some areas during January to March. This area is vulnerable to strong winds. Tropical lowland semi evergreen vegetation type is seen in valleys and foothills.

The unique meadow named Pitavalapatana is a Patna meadow with great aesthetic appeal. The grass cover is up to 10 m tall and occupies an area of ​​about 10 ha of gently sloping rock slabs covered by a layer of soil only 10–15 cm deep. Shrubs with thorns or thorny shrubs at a height of about two meters are grown as an impenetrable shrub around current and past settlements.

The Central Highlands of Sri Lanka was labeled as a World Heritage Site in 2010, in recognition of the site’s values ​​within one of the world’s richest sites of biodiversity. The Central Highlands of Sri Lanka were inscribed as World Heritage after the World Heritage Committee meeting held in Brasilia in August 2010. The site preserves the largest remaining stands of sub-montane and montane rainforest in Sri Lanka and protects an assemblage habitat. Allied species exhibit exceptional levels of endemism, many of which are site endemic.

What to see in Central Highlands

The Knuckles, locally called the Dumbra Hills, which means misty mountains, cover an area of ​​about 21,000 hectares in the districts of Kandy and Matale. The Knuckles Massif is separated from the Central Highlands by a deeply eroded valley called the Dambara Valley. It holds the distinction of 35 peaks above 1000 m above sea level, 20 over 1500 m and 2 peaks over 2000 m. The area above 1500 m in the Knuckles Range was declared as a Climate Reserve in 1873 and as a Conservation Forest in April 2000 and, later, as a National Human and Biosphere Reserve. Was declared.

Horton Plains National Park is a beautiful highland plateau situated at an altitude of 2100-2300 m above sea level and is covered with montane grassland and cloud forest which is also rich in biodiversity and many species found here are endemic to the region. are local. The weather in the plains changes significantly during the day with temperatures reaching up to 27 °C during the day and as low as 5 °C in the evenings and nights and there is dense fog and regular rainfall throughout the year.

The World’s End, a 700m steep drop that gives a stunning view of the valley below and the beautiful cascades of Baker’s Falls make it even more interesting for trekking and bird watching.

Peak Wilderness Sanctuary is a natural reserve in Sri Lanka which is the third largest of the 50 sanctuaries in the country. It is spread over an area of ​​224 square kilometer around Shri Pad Parvat. The striking pyramidal height of Adams Peak is 7360 feet, identified by Buddhists as the footprint of Buddha, by Hindus as Shiva, and by Muslims as Adam.

Not to miss in Central Highlands

Q. Where is Central Highlands Of Sri Lanka?

A – The highlands of Sri Lanka are located in the south-central part of the island. The property includes the Peak Wilderness Protected Area, Horton Plains National Park, and the Knuckles Conservation Forest.

Q. How is Central Highlands Of Sri Lanka?

The Central Highlands of Sri Lanka is a serial property consisting of three constituent parts: the Peak Wilderness Protected Area, the Horton Plains National Park and the Knuckles Conservation Forest. Its forests are globally important and provide habitat for an extraordinary number of endemic species of flora and fauna.

Q. What is central highlands of sri lanka famous for?

A – The Central Highlands of Sri Lanka is a recognized World Heritage Site in Sri Lanka. Sites include the Peak Wilderness Protected Area, Horton Plains National Park, and the Knuckles Conservation Forest. These are rain forests, where elevations reach up to 2,500 meters (8,200 ft) above sea level.

Q. How is the weather of central highlands of sri lanka?

Q. What is the best time of year to visit Sri Lanka?

A – Generally, the best time to visit the Cultural Triangle is between December and April, along the western and south coasts, while the climate is at its best from May to October on the east coast.

Q. Which is the best month to visit Sri Lanka?

A – It may sound ludicrous but Sri Lanka is actually a year-round holiday destination, although the best time to visit Sri Lanka is between December and mid-April, which is considered to be the peak season.