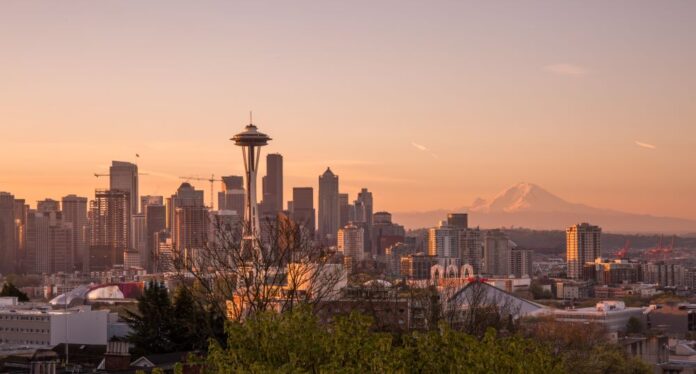 Seattle is the birthplace of Starbucks and Boeing. Tourists come here to enjoy the views of the largest metropolis in the northwestern United States, feel its character and taste the freshest seafood. Spend a week here – the city will find something to surprise you.

Where is it located and how to get there

Seattle is located in Washington State, less than 200 km from the Canadian border. While not a capital, it is the largest city in the region. It is often called “emerald” – all thanks to the dense evergreen forests around.

This place has gained popularity because of the port, which is one of the ten largest in the United States. And if earlier the main occupations of the townspeople were associated with the sea, now Seattle is one of the main IT cities in the world – here is the headquarters of Amazon, Expedia Group, and other large companies.

There are no direct flights from Russia to Seattle. You will have to get there with transfers. Ticket prices start at 38,000 rubles in both directions. Travel time – from 15 hours.

Where to live in Seattle

Budget hotels can be found in the Seattle suburbs. This option is convenient if you rent a car (the trip to the center will take 20-30 minutes). You will also need a car to travel to natural attractions in the vicinity of the city. The rental price per day starts from 4500 rubles. It is better to stay in the center without personal transport.

When is the best time to visit Seattle

Seattle is sometimes called the city of rain for a reason. Late autumn and winter are considered the wettest seasons of the year. The average temperature in November – March does not rise above +5 ° C.

The most favorable season for traveling in Seattle is from May to September. At this time, the air warms up to +25 ° C.

Things to do in Seattle

Seattle combines modern skyscrapers and authentic culture. There are many museums, art objects, parks. In the vicinity, you can find mountain hiking trails to volcanoes and lakes. What must be done in the city?

The main attraction of Seattle is the Space Needle Tower. The height of the skyscraper is 184 meters, outwardly it looks like a needle stretching to the sky, and at the very top there is a “flying saucer”. Tourists can visit the restaurant and observation deck, which offer views of the city, bay, and mountains. Entrance fee – 35 $ *.

You need to walk around the metropolis for a long time, exploring every corner. Lots of things to do on the Downtown Quay. There are fish restaurants, luxury hotels, sea vessels sailing along the bay. The aquarium, where you can see fur seals, seals, beavers, and other representatives of the fauna, is also located nearby. And at Pier 57, you can find the 53-meter-high Seattle Big Wheel. An ideal place to admire the sea views of the city.

After walking along the waterfront, head to the Columbia Center, the tallest skyscraper in the metropolis. In the same area, pay attention to the Central Library in a futuristic style.

In the city, you can find corners with different cultures. Asian lovers, for example, can head to Chinatown. If that’s not enough, explore the Japanese Garden, located at the southern end of Washington Park.

In general, Seattle is a city of parks, there are so many of them that you can walk in a new place every day.

Seattle will also appeal to museum lovers. The largest private aviation museum in the United States is located right at the airport. We also recommend visiting the Pop Culture Museum, which contains celebrity guitars, costumes, and movie props. The Seattle Art Museum also has a large exposition – the collection includes artifacts of various cultures and nationalities, the complex also includes the Olympic Sculpture Park.

Visit the market and taste the pies

Pike Place Market is the oldest market on the continent. Here you can find everything: from freshly caught fish to cheese and bread. Tourists come here not only for shopping but also for beautiful views. Tidy counters involuntarily force visitors to purchase goods. The sellers themselves have become iconic for a long time. They came up with an interesting movie to be remembered and attract tourists. The Flying Fish Show became famous throughout America. The bottom line is simple: sellers throw fish to each other, accompanying such a game with shouts. If sleight of hand allows, visitors themselves can participate in the performance. It is better to come to the market before the opening itself – at 7 am.

It was on the territory of the market that the first Starbucks coffee shop opened in 1971. The place is still preserved – you won’t surprise anyone with coffee, but everyone wants to touch the historical corner.

On the territory of the market, there are also establishments of Russian cuisine, founded by immigrants from our country. It is easy to find them – it is almost impossible to walk past the signboards with the words “Pies, pies”.

To honor the memory of great musicians

The city is inextricably linked with two musicians – Jimi Hendrix and Kurt Cobain. Great Hendrix was born in Seattle. Not long ago, a monument was erected to him at 1604 Broadway.

Another legend is the lead singer of the Nirvana group. A few months before his death, Kurt Cobain bought a house in Seattle, where the tragic event happened. Fans continue to come here on the musician’s birthday and death. House finds the address 171 Washington You Blvd E Lake.

Seattle is a creative and imaginative city. Here you can find unusual details and stylish solutions everywhere. If you love everything bright and memorable, this is the place for you.

The city’s most controversial landmark is the gum wall. It is located in the Pike Place market area. It all started in 1993, when students, standing in line at the theater, decided to have fun and pasted chewing gum on the wall. Locals and tourists continued to leave rubber bands on nearby buildings. The most unusual area of ​​the city is Fremont, for a long time it was even called the capital of the counterculture and the republic of artists, and the residents dubbed it the “Center of the Universe”. The main object is the Fremont Troll, who settled under the bridge. There is also a statue of Vladimir Lenin here. It is often here that festivals and holidays are held: a parade of cyclists without clothes, which is held on the summer solstice, and others.

Seattle is surrounded by mountains and national parks. Be sure to rent a car on weekends and go out of town on a short hike. Most popular destinations:

Mount Rainier. Tourists can go light trekking in a day, admiring the peak of the highest mountain in the Pacific Northwest. The 10-hour route is best for this.

Olympic National Park. There are mountains, sandy beaches, and even rainforests. Tourists can stay overnight camping or rent a cottage. More details are on the official website.

North K cascade. It is located two hours from Seattle. There is a ski resort here, where Americans and Canadians like to come. The park got its name from the high cascading mountains.

Seattle is an underrated city where industry and art, future and past are mixed. There are not so many tourists here as in Los Angeles or New York, but the metropolis can definitely surprise you with its culture and nature.