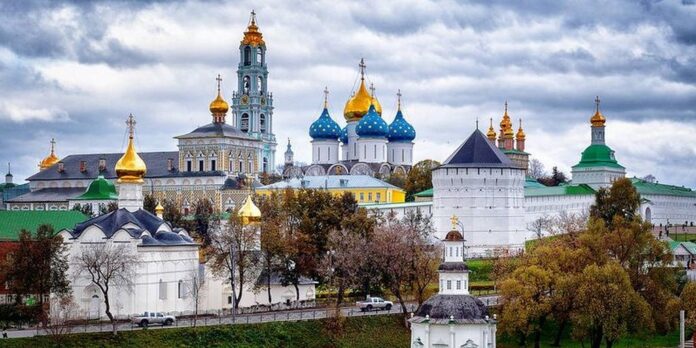 The architectural ensemble of the Trinity Sergius Lavra in Sergiev Posad, included in the World Heritage List in 1993, was created gradually over almost six centuries and includes more than 50 different buildings, including the Trinity Cathedral (1422-1423), the Assumption Cathedral (1559-1585 years), fortress walls and towers (XVI century), a temple in honor of the Monk Zosima and Savvaty of Solovetsky (1635-1637), a church in honor of the Nativity of St. John the Baptist (1693-1699) and other monuments. The World Heritage Site is managed by the Holy Trinity Lavra of St. Sergius.

Architectural Ensemble of the Trinity Sergius Lavra in Sergiev Posad

It is a fine example of a functioning Orthodox monastery, with military features that are typical of the 15th to 18th centuries, the period during which it flourished. The main church of the Lavra, the Cathedral of the Assumption (echoing the Kremlin Cathedral of the same name), houses the tomb of Boris Godunov. In the treasury of the Lavra is the famous icon of Andrei Rublev The Trinity.

The Trinity Lavra of St. Sergius is a world-renowned spiritual center of the Russian Orthodox Church and a popular site of pilgrimage and tourism. Located in the town of Sergiev Posad, about 70 km northeast of Moscow, it is the most important working Russian monastery and residence of the Patriarch. This religious and military complex represents a symbol of the development of Russian architecture and contains some of the best expressions of that architecture. This had a profound effect on architecture in Russia and other parts of Eastern Europe.

The estate is a serial, consisting of buildings outside the main monastic complex.

The Trinity Lavra of St. Sergius, the “pearl of Russian church architecture”, was founded in the first half of the 14th century (1337) by the monk Sergius of Radonezh, a great abbot of Russia and one of the most respected Orthodox. Saints. Sergius achieved great reputation as a spiritual advisor to the great Prince of Moscow, Dmitry Donskoy, who received his blessing at the Battle of Kulikov of 1380. The monastery began as a small wooden church on Makovets Hill, and then developed and strengthened through the ages.

A unique ensemble of over 50 buildings and constructions of various dates was established over the centuries. The whole complex was built according to the architectural concept of the main church, the Trinity Cathedral (1422), where the relics of St. Sergius can be seen.

In 1476 the Pescovian masters built a brick belfry to the east of the cathedral dedicated to the descent of the Holy Spirit upon the Apostles. The church combines unique features of early Muscovite and Peskovian architecture. A notable feature of this church is a bell tower under its dome without an internal interconnection between the belfry and the cathedral.

The cathedral, echoing the Cathedral of the Assumption in the Moscow Kremlin, was built between 1559 and 1585. The frescoes of Assumption Cathedral were painted in 1684. In the north-west corner of the cathedral, the west porch on the site, a vault containing the burials of Tsar Boris Godunov and his family, was built in 1780.

In the 16th century the monastery was surrounded by defensive walls 6 meters high and 3,5 meters thick, which proved their worth during a 16-month siege by Polish-Lithuanian invaders in times of trouble. Later they were strengthened and expanded.

After the turmoil of the 17th century a large-scale construction program was started. At this time new buildings were erected in the north-western part of the monastery, including the fortifications topped with a tent church dedicated to Saints Zosima and Savati of Solovki (1635–1637). Some such churches are still preserved, so this tent church with the unique tiled roof is an important contribution to the lavra.

At the end of the 17th century several new buildings in the Naryshkin (Moscow) Baroque style were added to the monastery.

After a devastating fire in 1746, when most of the wooden buildings and structures were destroyed, a major reconstruction campaign was launched, during which the appearance of many buildings was changed to a more monumental style. At this time one of the tallest Russian belfry (88 meters high) was built.

The parish church located on the territory of Sergiev Posad, which was originally of wood and later rebuilt in stone, formed a ring of domes, which echoed the lavra. Being different and smaller from other buildings, they only emphasize the supremacy of the Lavra.

Thus, the architectural ensemble of the Trinity Sergius Lavra consists of buildings and constructions inside the wall and a complex of buildings near the monastery. It represents a key element of Sergiev Posad’s town-plan.