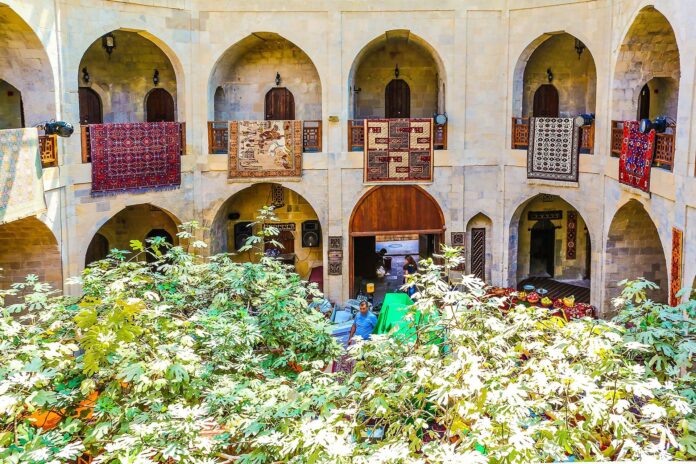 Walled City of Baku and the medieval center is a UNESCO-protected site surrounded by 12th-century walls rich in history and Eastern architecture. Here you’ll find the Maiden Tower, Baku’s most mysterious site – no one knows for sure what it was originally built for! Meanwhile, occupying the highest point in the citadel, the Shirvanshah Palace was the 15th-century residence of the medieval rulers of Azerbaijan. Beyond its main attractions, the ‘Inner City’, as it is called by locals, is a maze of narrow streets home to some of Baku’s oldest residents as well as artists’ workshops, souvenir stalls and traditional restaurants serving classic Azerbaijani cuisine.

Built on a site that has been inhabited since the Palaeolithic period, the walled city of Baku reveals evidence of Zoroastrian, Sasanian, Arabic, Persian, Shirvani, Ottoman and Russian presence in cultural continuity. The inner city (Icheri Sheher) has preserved most of its 12th-century defensive walls. The 12th-century Maiden Tower (Giz Galasi) builds on older structures from the 7th to 6th centuries BC, and the 15th-century Palace of the Shirvanshah is one of the pearls of Azerbaijani architecture.

Rising from the southern edge of the Apsheron Peninsula on the western edge of the Caspian Sea, the walled city of Baku was founded on a site inhabited since the Palaeolithic period. The city, with the dominant Azerbaijani element, reveals evidence of Zoroastrian, Sasanian, Arabic, Persian, Shirvani, Ottoman and Russian presence in cultural continuity. The inner city (Icherisher) has preserved most of its 12th-century defensive walls, which define the character of the property.

The oldest monument of Icherisher is the Maiden Tower – a symbol of the city of Baku. Some evidence suggests that the tower may have been built in the 7th-6th centuries BC. Another monument of universal value, one of the pearls of Azerbaijani architecture is the 12th to 15th century palace of the Shirvansh, located on the highest point of Icherisher.

Diwankhana (reception hall) within the palace complex or, as some researchers believe, the Shah’s Tomb, the residential building of the Shirvanshah, the remains of the Ki-Qubad Mosque, the Tomb of Sayyid Yahya Bakuwi, the Gate of Murad (the only monument) 16th century), the family tomb of the Shirvanshah, the Shah Mosque and the Palace Bath. Earlier monuments to Icherisher include the Mohamed Mosque, with the adjacent minaret built in 1078, and the remains of a 9th to 10th century mosque near the Maiden Tower.

There are also several historical-architectural monuments from the medieval period such as caravanserais, hammam (bathrooms), mosques and residential buildings from the 18th to 20th centuries located within the property.

The magnificence of Echerischer lies in the combination of its historically composed architectural spatial plan with its distinctive architectural monuments and original street scenes, which are merged into a single unit to reflect its long history and the fusion of cultures that have influenced its history in the past. affected development. nine centuries. Icherisheher is still a vibrant, vibrant city with local communities living in residential areas.

Criterion (iv): The Walled City of Baku presents an outstanding and rare example of a historic urban ensemble and architecture with influences from Zoroastrian, Sasanian, Arabic, Persian, Shirvani, Ottoman and Russian cultures.

More About World Heritage Sites In The World

Q. Which country is famous for its medieval walled inner city?

A – The ‘walled city of Baku with Shirvanshah’s Palace and Maiden Tower’ contains the remains of a medieval city, which has been the capital of Azerbaijan since 1191.

Q. What is the palace in Baku?

A – Baku Fort (Azerbaijani: Baqi Kalaso) is the largest of the Absheron forts. The fort comprises the Icheri town and its surrounding walls and minarets and was included in the World Cultural Heritage List by UNESCO in 2000.

Q. Why is Baku a World Heritage Site?

A – Built on a site that has been inhabited since the Palaeolithic period, the walled city of Baku reveals evidence of Zoroastrian, Sasanian, Arabic, Persian, Shirvani, Ottoman and Russian presence in cultural continuity. The inner city (Icheri Sheher) has preserved most of its 12th-century defensive walls.

Q. Where is the Old Maiden Tower?

A – Baku, The development of this land took place between the 9th and 15th centuries, when the old city walls, the palace including the majestic bastion of the Maiden Tower were built.

Q. Which language do they speak in Azerbaijan?

A – Given all these facts, the age of the city is more than 5,500 years. Baku was one of the main cities of the Shirvansh kingdom (12th century), the Safavid kingdom (16th century), the Ottoman Empire in the 17th century, the Baku Khanate (18th century).

Q. How many UNESCO sites are there in Azerbaijan?

A – After the breakup of the Soviet Union, Azerbaijan succeeded to the convention on 16 December 1993. As of 2021, Azerbaijan has three sites on the list.

Q. How old is the Maiden Tower in Baku?