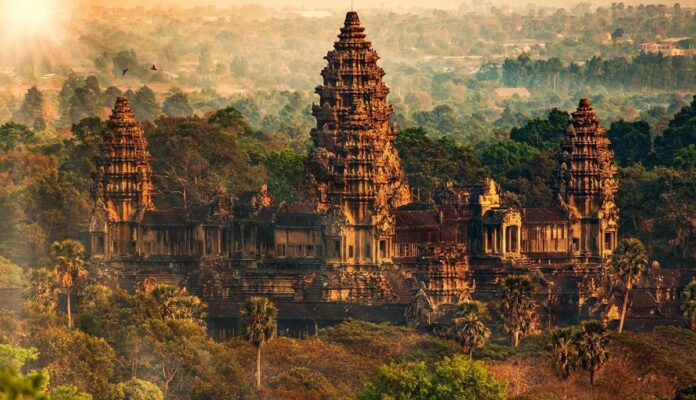 Angkor is the northernmost province of Siem Reap in Cambodia. For centuries, it was the center of the Khmer Empire, built with the highest degree of ingenuity to sustain its people for centuries. UNESCO states that “with impressive monuments, many different ancient urban plans, and large water reservoirs, the site is a unique center of features testifying to an extraordinary civilization.” Angkor Wat is one of the acknowledged World Heritage Sites.

The 400 square kilometers of the archaeological park outlines an impressive progression of history and the hierarchy of rule of kings from Hinduism to Buddhism. The state was run by the kings of both religions at different times, in which the idols of both religions are made. The park is protected by a UNESCO foundation and is found in the list of the Seven Wonders of the Old World.

Sites That Make Up The Archeological Park

Ta Prohm is the quintessential picture of Angkor with strong trees dividing the temple, uprooting its foundation. The temple was left in the care of nature after the fall of the Khmer Empire in the 15th century. The city of Ta Prohm was established as a Buddhist monastery and university. According to historians, the periphery was home to over 12,000 people. The temple is well visited and cited. Keep in mind that as of 2017 they are rebuilding part of the temple, but famous corners like the Tomb Raider Tree are still visible.

Angkor Wat is the most famous and the largest of the temples which is a city in itself. From the temple’s structural peaks, 600 meters of carved narratives along the outer walls, representing the five peaks of Mount Meru in Hinduism, give visitors a glimpse of the sophistication in which civilization was founded and functioned. It is the largest religious monument in the world which covers about 200 hectares within the moat.

Angkor Thom is considered the temple of faces. It was the capital of the former Khmer Empire. It is a group of faces ranging from kings to gods. The temple is meticulously surrounded by elaborate stone carvings. The entrance gates of Angkor Thom are especially worth checking out. Passing under the stone arches, you will see elephants with long trunks guarding them on both sides.

Preah Khan is a temple but is further believed to be a Buddhist university built in dedication to the father of King Jayavarman VII. Historians speculate that the structure was built on the site of a major battle to recapture Angkor from the invading Chams. Its long halls and arches are fun to explore and imagine what education might have been like centuries ago. There is a huge tree at the back entrance of the university which is quieter and less touristy than Ta Prohm.

Ta Som was built in the late 12th century during the reign of a Buddhist king. Little is known about its actual purpose, but both the outer entrances to Ta Som are “good examples of well-preserved towers depicting Avalokiteshvara (Bodhisattva of Compassion).” There is a beautiful ficus tree with its roots at the entrance. It creates an attractive picture and is less crowded than Ta Prohm, so you can easily get a picture without anyone in the background.

Neak Peen is a Buddhist temple built on an artificial island. The long boardwalk above the old reservoir makes it a peaceful visit to the temple. It is particularly noted for its circular construction and serpent carvings around the base of the temple.

Ways Around The Park & Angkor Wat

Some visitors pre-book cars and drivers through third-party websites for a good price. A driver with an air-conditioned car for the day can run anywhere from $20 to $50 depending on the type of car, the circuit you choose, and whether you specifically choose to have an English-speaking guide. Please note that the English-speaking guide at the entrance to Angkor Wat is different from the park guide. Unless specified, a driver’s English-speaking guide will lead you through the temples, explaining each carving. Although they have guides, they mainly stand outside the entrance to Angkor Wat before you cross the bridge. These guides will have an official badge and will guide tours throughout the day.

A popular option is to travel by tuk-tuk in which you can hire a driver for the day. Tuk-tuk drivers can be arranged through tour agencies, hostels, or by interacting directly with drivers on the road. Their services range anywhere from $15-$30 depending on the circuit, whether you go from sunset to sunrise, and your negotiation skills.

You can rent an electric bike in Siem Reap to explore the temples. They are not motorbikes but push bikes with a motor. This low tax option would be a fun way to explore based on your own terms at your own pace. It is not illegal to rent them to tourists as they are considered bicycles, not motorbikes. They only cost $10 for a full-day rental. However, e-bike guided tours cost around $70, so definitely do your research.

Q. What is Angkor Wat famous for?

A – Although one of the hundreds of surviving temples and structures, the colossal Angkor Wat is the most famous of all of Cambodia’s temples – it appears on the nation’s flag – and is revered for good reason. The 12th-century “temple-part” was built as the spiritual home of the Hindu god Vishnu.

Q. Why is Angkor Wat important to Cambodia?

A – Spanning over 400 acres, Angkor Wat is said to be the largest religious monument in the world. Originally dedicated to the Hindu god Vishnu, Angkor Wat became a Buddhist temple by the end of the 12th century.

Q. Why was Angkor Wat abandoned?

A – The cause of the collapse of the Angkor Empire in the early 15th century remained a mystery for a long time. But researchers have now shown that a prolonged drought in the region followed by intense monsoon rains caused widespread damage to the city’s infrastructure, leading to its collapse.

Q. Why was the temple complex of Angkor Wat built?

A – Angkor Wat, built in the early 12th century, is a typical Hindu temple, which expresses the king’s devotion to the Hindu deity Vishnu. The temple was built as a palace of Vishnu, which was established there to allow the founder to receive his favor.

Q. Is Cambodia a Hindu country?

Q. Is Angkor Wat the 7 wonders of the world?

A – The world’s largest and oldest religious monument, Angkor Wat, is fast becoming a must-see monument in Asia. Now, the temple is part of the Angkor World Heritage Site and is considered one of the Seven Wonders of the World.