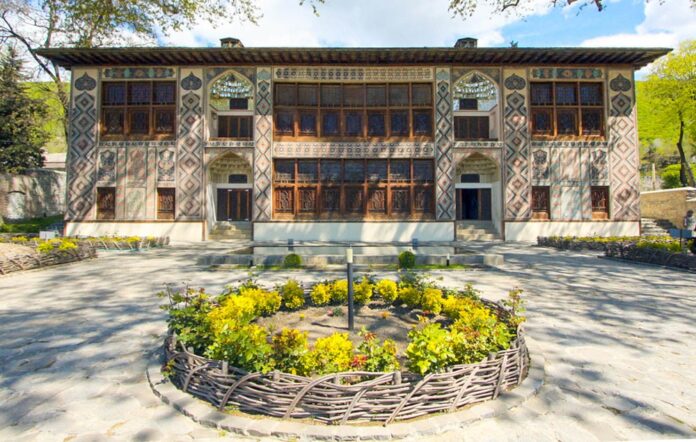 Sheki & The Khan’s Palace – The historic city of Sheki is located at the foot of the Greater Caucasus Mountains and is divided into two by the Gurjana River. While the old northern part is built on a mountain, its southern part extends into the river valley. Its historic centre, built in the 18th century after the destruction of the earlier city by mudflows, is characterized by a traditional architectural ensemble of houses with high pitched roofs. Located along important historical trade routes, the city’s architecture is influenced by Safavid, Qajar and Russian building traditions. The Khan Palace, located to the northeast of the city, and several trading houses reflect the wealth generated by silkworm breeding and the silk cocoon trade between the late 18th and early 19th centuries.

July 2019: The historic city of Sheki, located a short five-hour drive from Azerbaijan’s capital-Baku, was added to the UNESCO World Heritage List of Cultural Sites during the 43rd session of the committee meeting.

The opening ceremony of this year’s session was held in Baku on 30 June, marking the beginning of the committee’s work this year.

Commenting on the addition, Florian Sengstshmid, CEO of Azerbaijan Tourism Board, said, “We are honored that the historic center and palace of Sheki have made it to the UNESCO World Heritage List. By receiving this recognition, we have received the recognition of the rich heritage of Azerbaijan, It will help in showing the distinctive. The story of the country’s heritage as well as culture and unique history for the world.”

“The city of Sheki is one of Azerbaijan’s most picturesque cities, filled with cobbled streets and medieval architecture – a fresh, pleasant retreat from the vibrant capital. For the palace, travelers from all over the world are fascinated by the craftsmanship And it is one of the most prized pieces of Azerbaijan’s historical architecture.”

Situated at the foot of the large Caucasus mountains and divided in two by the Gurjana River, Sheki is home to the palace and summer house of the Sheki khans.

A unique architectural monument of the Khanate’s empire, the Sheki Khans Palace was built in 1762 by Hussain Khan, surrounded by attractive poplar trees within the Khan’s Fort at the top of this charming Silk Road city.

The city itself was an important destination on the Great Silk Road, an ancient network of trade routes connecting East and West. By the 19th century, on the Silk Road path through northwestern Azerbaijan, Sheki was an international center of silk production. While the old northern part is built into the mountains, its southern part extends to the river valley.

The ancient art of ‘Shebeke’, for which Azerbaijani craftsmen are famous, can be seen throughout the city, especially on the windows of the Sheki Palace. A mosaic set of colored glass in wooden latticework and these are stunning examples of artwork assembled without nails or glue. What makes Sheki Khan Palace unique is the 5,000 wooden and glass details of ‘Shebeke’ making it a true visual feast.

UNESCO seeks to encourage the identification, protection and protection of cultural and natural heritage considered worldwide as of outstanding value to humanity. It is included in other UNESCO sites in Azerbaijan including the Gobustan Rock Art Cultural Landscape (2007) and the Walled City of Baku with the Palace of Shirvansh and the Maiden Tower (2000).

Q. What are petroglyphs?

Q. How do you get to Mud Volcano Baku?

A – Located a 1.5-hour drive from Baku, the mud volcanoes in Dashgil near Gobustan Reserve are among the most popular to visit. Admission is free, although a short taxi ride from Gobustan Reserve can cost around 20 AZN.

A – More than 6000 rock carvings have been found in Gobustan and bear witness to a 12,000 year old civilization that once lived along the Caspian Sea.

A – Get in
By train. The train station has a somewhat inconvenient location about 17 km (11 mi) from the city center.
By bus or marshrutka. Marshrutka and departure times.
By taxi. Until the airport begins operating again, the fastest form of transport between Baku and Sheki is by taxi — it takes about 6 hr and 60 manat.

Q. Is Azerbaijan on the Silk Road?

A – The Silk Road passes through many cities in the north-west direction. Baku, the capital of Azerbaijan, located at the crossroads of East and West, remains the main administrative, political, cultural, ideological, handicraft and trade center of the region. The city is also a major port.