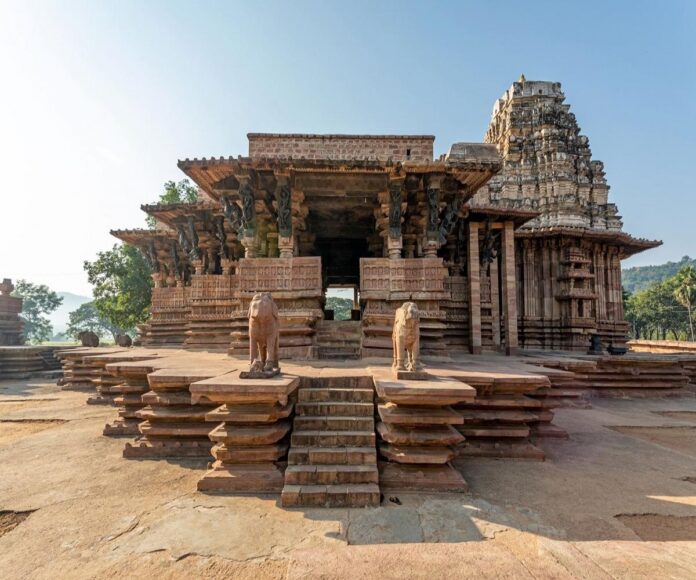 Rudreshwar, popularly known as Ramappa Temple, is located in the village of Palampet, about 200 km north-east of Hyderabad in the state of Telangana. It is the main Shiva temple in the walled complex built during the Kakatiya period (1123–1323 CE) under the rulers Rudradeva and Recharla Rudra. The construction of the sandstone temple began in 1213 CE and is believed to have continued for about 40 years. The building has decorated beams and pillars of granite and dolerite carved with a distinctive and pyramidal vimana (horizontally terraced tower) made of lightweight porous bricks, the so-called ‘floating bricks’, thereby reducing the weight of the roof structures.

The sculptures of the temple’s high artistic quality reflect the regional dance customs and Kakatiya culture. At the foot of a wooded area and amidst agricultural fields, close to the banks of Ramappa Cheruvu, a Kakatiya-built water reservoir, the choice of setting for the building follows the ideology and practice accepted in religious texts that temples are to be built. Designed to form an integral part of a natural setting, including hills, forests, springs, rivers, lakes, catchment areas and agricultural land.

Warangal in the Deccan plateau is home to very classic and splendid Kakatiya art. Ramalingeshwara Temple popularly known as Ramappa Temple is one such marvelous piece of art that stands as a testimony to the royal Kakatiyas. The temple was named Ramappa because of Ramappa, the chief sculptor. This is probably the only temple in the country which is known by the name of its sculptor.

The medieval Deccan Ramappa temple, which dates back to 1213 AD, was under the patronage of Kakatiya ruler Kakati Ganapati Deva under the authority of his chief commander Rudra Samani known as Ranakude in Atukuru province. Temple is the perfect place for those who admire architectural brilliance and have a panoramic view of the true natural beauty. This temple is located in Palampet village of Venkatapur mandal in Mulug taluk of Warangal.

Ramappa Temple has been referred to as the brightest star in the network of medieval temples in the Deccan region. You can reach the temple through a royal garden, which is now reduced to a lawn with a path paved with trees. Another special feature of this temple is that it is made of bricks which are so light that they can easily float on water. It took about 40 years to build this temple located in the valley. Elaborate carvings line the walls and cover the pillars and ceiling of the temple as well.

The temple holds its hold on a platform 6 feet high on a cruciform plan. The chamber of the temple is crowned with a shikharam and is surrounded by a pradakshinapatha. At the entrance of the temple, we can find the Nandi Mandapam. A grand Nandi Deity stands on it.

How To Reach | Ramappa Temple

Ramappa Temple is located at a distance of about 70 km from Warangal city and can be reached by road.

Q. Who built the famous Ramappa temple at Palampet?

A – Popularly known as Ramappa Temple from Warangal city. The temple was built in 1213 AD by the Kakatiya king Ganapati Deva and is an enduring testimony to the beauty and brilliance of Kakatiya temple architecture.

Q. What is special about Ramappa Temple?

A – Ramalingeshwara Temple popularly known as Ramappa Temple is one such marvelous piece of art that stands as a testimony to the royal Kakatiyas. The temple was named because of Ramappa, the chief sculptor. This is probably the only temple in the country which is known by the name of its sculptor.

A – The temple complex was built by Racherala Rudra Reddy during the period of Kakatiya ruler Ganapati Deva. It was built using sandstone and its construction, which began in 1213 CE, is believed to have continued for more than four decades.

Q. Which god is in Ramappa temple?

Q. When was Ramappa temple built?

A – Outside the temple there is an inscription in Telugu describing Racherala Senapati Rudrayya, a general of the Kakatiya rulers of Warangal, who commissioned the lake and the temple, which took 40 years to be completed in the 13th century.