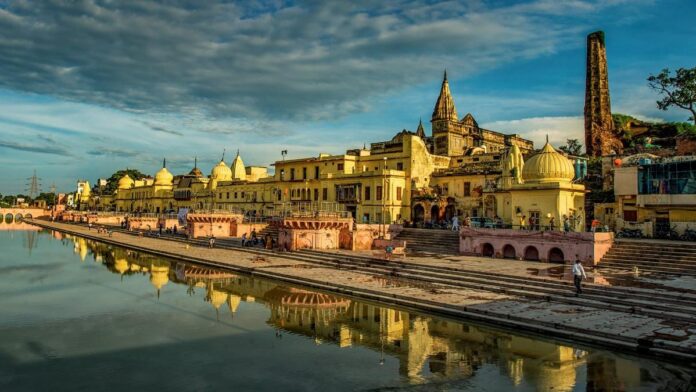 Ayodhya holds a special place in the hearts of many Hindus. According to Hindu mythology, Lord Rama was born there and it is the setting of the “Ramayana”, the great epic that tells the story of Rama’s inspiring life. Rama is worshiped as the seventh incarnation of Lord Vishnu, the preserver of the universe. In addition, the Garuda Purana (a Hindu scripture) lists Ayodhya as one of the Sapta Puris (seven holiest cities) that can bestow moksha (liberation from the cycle of death and rebirth). It is also the place where the five Tirthankaras (religious teachers) of Jainism were born. This makes the city an important pilgrimage site.

Ayodhya is an interesting place for travelers who like off-the-beaten-track as well. Not only is it devoid of foreign tourists, it is an atmospheric and peaceful city which shows how India has assimilated various religions into its social fabric. You would never have guessed that it has been the site of bitter and violent communal disputes.

In December 1992, a political rally in Ayodhya turned into riots, during which frenzied Hindu extremists destroyed a 16th-century Mughal-era mosque known as the Babri Masjid (Babur’s Mosque). Their reason was that the mosque was built at the holy place where Lord Rama was born. It is said that the Mughal commander Mir Baqi demolished an already existing Hindu temple for the construction of a mosque for Emperor Babur. The emperor had conquered most of northern India, and the historic mosque had typical Tughlaq-style architecture similar to mosques in the Delhi Sultanate.

Both Hindus and Muslims worshiped in the mosque premises until 1855, when a conflict broke out between the two religious groups. This resulted in the British rulers seizing the complex and preventing Hindus from entering the interior. The Hindu group eventually filed a claim to build another temple next to the mosque in 1885, but this was rejected by the court.

Decades later, divisive political movements fueled the conflict. In 1949, Hindu activists ransacked the mosque, and placed idols of Lord Rama and his wife Sita inside. A local official declared that their removal would spark communal unrest. The government closed the place so that the public could not enter, but allowed Hindu priests to perform daily pujas (rituals) for the idols. The site remained closed and in dispute, as religious groups filed several lawsuits seeking to control it.

A new political movement in the 1980s aimed to “liberate” the birthplace of Lord Rama and “reclaim” it for Hindus. It gained momentum when a 1986 court order reopened the gates of the mosque and allowed Hindus to worship inside. In 1990, a political party organized a procession to Ayodhya to support the movement. Activists tried to attack the mosque but the police and paramilitary forces were able to avert it.

The successful attack in 1992 sparked reactionary riots across India, resulting in the loss of thousands of lives. The Government of India set up a commission to investigate the circumstances that led to the demolition of the mosque. In 2003, the Allahabad High Court ordered the Archaeological Survey of India to excavate the site, to see if there was any evidence of a Hindu temple. Although traces of a large structure were found beneath it, the Muslims dispute the findings.

Meanwhile, the Hindus built a temporary temple at the site called Ram Janmabhoomi (Rama’s birthplace). In 2005, Muslim terrorists attacked it with explosives. In 2007, the head of the temple received death threats. The Allahabad High Court intervened in 2010 to declare that the land should be divided equally among Hindus, Muslims and the Nirmohi Akhara (a group of Hindu ascetics dedicated to Lord Rama). The site of the mosque was given to the Hindus. However, religious groups appealed the decision, and it was suspended by the Supreme Court. In November 2019, the court finally ended the dispute, upholding the verdict in favor of Hindus. A new Ram temple is now under construction at the site. The works have unearthed several religious objects, further supporting the claim of Hindus that a temple existed there before Muslim invaders built the mosque.

Unfortunately, the early history of Ayodhya is unclear and uncertain. Archaeological evidence indicates that present-day Ayodhya was first the city of Saketa during the time of Lord Buddha. Buddhist scriptures say that Buddha stayed there for some time and preached. It is believed that the Gupta king “Vikramaditya” Skanda Gupta, who was an ardent devotee of Lord Rama, changed its name in the 5th century. There is some debate as to whether ancient Ayodhya in the “Ramayana”, which is said to have been lost for centuries, is actually the same city.

Nevertheless, it was not until the rulers of the Gadavala dynasty built several Vishnu temples in Ayodhya in the 11th and 12th centuries that pilgrims gradually began arriving there. The worship of Lord Rama rose to prominence in Ayodhya after the 15th century, when mythological stories about him grew in popularity and the city was acknowledged as his birthplace.

The nearest major airport is at Lucknow, and it is well connected to other cities in India. Hence, Ayodhya is most conveniently visited on a side trip from Lucknow.

Ayodhya has a railway station but there is a bigger one in Faizabad, about 20 minutes away. Express and super fast trains from major cities across India stop there.

Alternatively, a taxi from Lucknow to Ayodhya will cost around Rs 3,000. It’s a book possible with Uber.

What to Do There

The main attractions of Ayodhya are its serene river bank ghats (stairs leading to the water) and many temples. The city is not very big, so you can walk to them. The winding streets are lined with typical Old World homes, decorated with fine carvings.

For those who prefer to go on a guided walking tour, this Mokshadayani Ayodhya Walk organized by Tornos is highly recommended.

Otherwise, start at the ornate and lively Hanuman Garhi, the temple closest to the main road. This prominent fort temple is dedicated to Lord Hanuman (the monkey god, who helped Lord Rama in the fight against evil). Legend has it that he lived there and protected Ayodhya. The temple remains particularly busy on Tuesdays, the main day of Hanuman Puja. Beware of monkeys who try to steal the prasad (food offerings given to the god).

Continue to develop Dashrath Mahal, located a hundred or more meters on the road from Hanuman Garhi. This temple is known as the palace of Rama’s father. Inside the grand and colorfully arched entrance, the atmosphere is uplifting with the chanting of saffron-clad holy men and musicians playing bhajans (devotional songs).

Just a few minutes away, Kanaka Bhavan is a grand golden palace temple which is said to have been gifted to Rama’s wife Sita at the wedding of her stepmother Kaikeyi. The current version was created in 1891 by Queen Krishnabhanu Kumari of Orchha. This is one of the main attractions of Ayodhya. The atmosphere there is also relaxing, with people often singing and playing music. The temple remains open from 9 am to noon and 4 pm. In winter till 9 pm. Summer hours vary slightly (see website for details).

Turn left just before Dasharatha Mahal and walk a short distance to reach Ram Janmabhoomi, Ayodhya’s most controversial temple complex. Obviously, security is tight and entry is restricted. You will need to show your passport (or other suitable identification) and leave your belongings in a locker outside. The campus remains open from 7 am to 11 am and till 2 pm. By 6 pm as soon as you enter it, near the first checkpoint, you will see a small temple known as Sita Ki Rasoi (Sita’s Kitchen). This iconic kitchen has a corner set up with imitation old-fashioned utensils, rolling pins and rolling plates.

A 30-minute walk will take you to the banks of the river and to the ghats. Some have special significance and are particularly auspicious, such as Lakshman Ghat (where Rama’s brother Lakshmana took a bath) and Swarg Dwar (also known as Ram Ghat, where Lord Rama was cremated). Several ghats are grouped along a beautiful section called Ram ki Paidi. The complex includes the Nageshwarnath Temple, which is dedicated to Lord Shiva and is said to have been founded by Rama’s son Kush. Ideally, stay on the ghats around sunset. Go out on a boat in the river and return in time to perform the saryu aarti (devotional fire ritual). The ghats are beautifully illuminated in the evening. There is a grand Diwali festival celebrated in October or November, in which thousands of earthen lamps are lit.

Stop by the informative Ayodhya Research Center at Tulsi Smarak Bhawan to learn about the culture and heritage of Ayodhya. The story of “Ramayana” is narrated in various Indian art forms, and there are daily free performances of Ram Leela from 6 pm onwards. till 9 pm

As you roam the streets, you may also come across panoramic murals with scenes from “The Ramayana” on the sides of the buildings. Students of fine arts from Uttar Pradesh painted them on 100 walls as part of the 2018 Ayodhya Kala Mahotsav.

Other attractions in Ayodhya include various kunds (wells) built in honor of characters from the “Ramayana” and a group of historic Sikh gurdwaras (places of worship). Three Sikh Gurus (Guru Nanak, Guru Tegh Bahadur and Guru Gobind Singh) are believed to have passed through Ayodhya.

There are limited places to stay in Ayodhya. Ramprastha Hotel is your best bet, with rooms for around Rs 1,000 per night. You’ll find more accommodations in nearby Faizabad, though none are really excellent. Kohinoor Palace Heritage Hotel is one of them. Expect to pay around 2,000 rupees per night. Hotel Krishna Palace is also popular. It is close to the railway station and has a new block of rooms. Rates start from around Rs 2,500 per night.

Q. What is another name for Ayodhya?

A – Ayodhya, also known as Saket, is an ancient city in India, the birthplace of Lord Rama and the setting of the great epic Ramayana.

Q. For how many years did Rama rule Ayodhya?

A – Lord Rama ruled the kingdom of Ayodhya for eleven thousand years. This golden period is known as “Rama Rajya”.

A – According to another theory, the mythical Ayodhya is a mythical city, and the name “Ayodhya” began to be used for Saket (present-day Ayodhya) only around the 4th century, when a Gupta emperor (probably Skandagupta) moved his capital. Gave. Saketa, and changed its name to Ayodhya after the mythical city.

Q. Who built the city of Ayodhya?

A – According to inscriptions at the site, it was built in the year 935 of the Islamic calendar (September 1528–September 1529 CE) by Mir Baqi, possibly a beehive serving under the Mughal emperor Babur.

Q. Who demolished the Ayodhya temple?

A – Babur came to Ayodhya in 1528 AD and stayed here for a week. He destroyed the ancient temple and built a mosque in its place, which is still known as Babur’s Masjid.