Hill Forts of Rajasthan – Symbolizing Glory Of Past 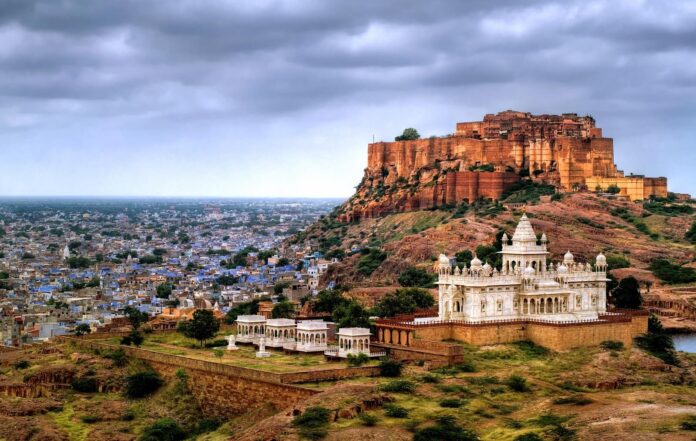 Hill Forts of Rajasthan – The serial site located in the state of Rajasthan includes six majestic forts in Chittorgarh; Kumbhalgarh; Sawai madhopur; Jhalawar; Jaipur and Jaisalmer. The eclectic architecture of the forts, in a radius of about 20 kilometers, is a testimony to the power of the Rajput princely states that flourished in the region from the 8th to the 18th centuries. Within the defensive walls are other buildings including major urban centers, palaces, trading centers, and temples, often preceding fortifications within which a wide court culture develops that supports learning, music, and art. A few urban centers enclosed in fortifications have survived, as have the site’s many temples and other sacred buildings. Forts use the natural defenses offered by the landscape: hills, deserts, rivers and dense forests. They also have extensive water harvesting structures, which are still in widespread use today.

The Chittorgarh Fort is a fitting symbol of the Rajput spirit. Perched atop a high hill, this majestic fort is a staple in tales of courage, pride and romance that the bards of Rajasthan have been singing for centuries. Legend has it that Bhima, one of the heroic Pandava brothers of Mahabharata, started construction of this fort. The fort has many magnificent monuments, some unfortunately devastated over the centuries.

The grand structure harkens back to the days of triumphs, triumphs and tragedies, and its walls ring with incredible stories of extraordinary men and women. A road weaves its way from the foothills to the summit, taking visitors through seven gates before arriving at Rampol (Rama’s gate). On the road between the second and third gates, visitors find two cenotaphs built in honor of Jaimal and Kalla, the heroes who sacrificed their lives in the siege of 1568 by Emperor Akbar. The main gate of the fort is Surajpol (Sun Gate).

Amber (pronounced Amer) is about 11 kilometers from Jaipur. A UNESCO World Heritage Site, it was the bastion of the Amber turtles, until the capital was moved to the plains, which is today Jaipur. This palace situated in the Khashahal hills is a beautiful combination of Hindu and Mughal style. Raja Man Singh I started construction in 1592 and the palace, which was built as a strong, safe haven against attacking enemies, was completed by Mirza Raja Jai ​​Singh.

The difference between a rigid exterior and an inviting interior could not be more surprising. Entirely made of red sandstone and white marble, visitors are mesmerized by the grandeur of the palace which uses carvings, precious stones and mirrors. The palace is further enhanced by the panoramic view of the Lake Maota in front. The palace is almost seven centuries old and has a mythological past.

Nestled amidst the golden sands of the Thar Desert, Jaisalmer Fort is one of the most famous forts in the world, showcasing superb craftsmanship and a beauty full of rich past and heritage. Built in 1156 by Raja Jaiswal, the fort is 250 feet long which is protected by 30 feet tall walls and forms 99 strongholds. Perched atop the Tirakuta hills, the fort has major structures such as the Raj Mahal, which was the royal palace of the fort, the beautiful Jain temple, the Laxminath temple and four huge gateways.

Apart from these, the Jaisalmer Fort is also famous for its carved yellow sandstone merchant havelis which are still in the possession of the original builders. A UNESCO World Heritage Site merging brilliantly with the golden hue of the desert, the fort of Jaisalmer boasts of various attractions that reflect the princely life of which the fort was once a part.

Kumbhalgarh Fort is situated on the top of a hill which is 1100 meters above sea level. The fort has around seven gates and a total of 360 temples, of which 300 are ancient Jains while the others are Hindus. A beautiful view of the dunes can also be seen from the fort in the Thar Desert, which has the second largest wall of 36 km in the world after the Great Wall of China.

Occupying a prominent position atop a hill inside Ranthambore National Park, this powerful fort has undergone many sieges and is still standing. It was built in the 10th century and served as a great protection for Rajput kings against foreign invaders. It is said that Ranthambore Fort was captured by Prithviraj Chauhan in the 12th century, and finally by Alauddin Khilji.

Visiting the fort is a fascinating experience as you can see a variety of creatures along the way. Also, as you grow slowly, many birds can be seen at eye level.

A fort without a foundation, Gagaron Fort is an architectural wonder surrounded by water on every side. Hence it is also called Jaladurg. Built by the Dod king Bijaldev in the 12th century, the fort is said to have suffered about 14 battles. It is filled with three ramparts, which is notable because most forts have two and two huge main gates. One of them leads to the river and the other to the hills.

Q. Where are the hill forts of Rajasthan located?

A – The serial site located in the state of Rajasthan includes six majestic forts in Chittorgarh; Kumbhalgarh; Sawai madhopur; Jhalawar; Jaipur and Jaisalmer.

Q. Which is the largest fort in Rajasthan?

A – The largest fort in India and Asia, Chittorgarh Fort is situated on a 180 meter hill. It is spread over 700 acres and is one of the largest forts in Rajasthan. The fort was built by the Mauryans in the 8th century AD.

Q. Who built the hill forts of Rajasthan?

A – It was constructed with the help of Rana Kumbha from 183 to 1857 AD under the supervision of the famous architect Mandan. The fort was built on the site of an old palace which is associated with the Sampradaya, a Jain prince of the second century BCE.

Q. Which fort is one of the largest forts in India and is listed as a popular UNESCO World Heritage Site?

A – It is a UNESCO World Heritage Site. The fort was the capital of Mewar and is currently located in the city of Chittor. It is spread over a hill of 180 meters (590.6 ft) in an area of 280 hectares (691.9 acres) above the valley plains swept by the Berach River.

Q. Why is Chittorgarh famous?

A – Chittorgarh was the capital of the Sisodia dynasty of Mewar. Jauhar is famous for that during the siege of Rani Padmini and Rani Karnavati, the Chittorgarh Fort has seen a lot of valiant wars. The fort is the largest in India, and attracts a large number of tourists throughout the year.

Q. What is the specialty of Chittorgarh?

A – The fort of Chittor is considered to be one of the most outstanding forts in the country and is truly the “pride of the state of Rajasthan”. The formidable fort is perched atop a 180 meter high hill, covering a vast area of 700 acres and is a permanent watchdog for the courage and valor of Chittorgarh.

Q. Why is Amer Fort famous?

A – Situated on a hill, it is a major tourist attraction of Jaipur. The Amer Fort is known for its artistic style elements. With its large ramparts and series of gates and stone paths, the fort overlooks the Maota Lake, the main source of water for the Amer Palace.

Q. Who built the Amber Fort?

A – One of the finest examples of Rajput architecture, it was the ancient capital of the Kachhwa rulers. The original palace was built by Raja Man Singh and later enlarged by Sawai Jai Singh.

Q. Why is Jaisalmer Fort famous?

A – The Jaisalmer Fort is the second oldest fort in Rajasthan, built in 1156 AD by the Rajput Rawal (ruler) Jaisal from which it derives its name, and stands at the crossroads of important trade routes (including the ancient Silk Road). For this reason it is also known as Sonar Fort or Swarn Fort.

Q. Who lives in Jaisalmer Fort?

A – Jaisalmer Fort, a UNESCO World Heritage Site, is the only ‘living’ fort in India. Built in 1156 by King Rawal Jaisal, the fort has a population of about 5,000 – mostly descendants of Brahmin and Rajput families who once lived here.

Q. Why is Kumbhalgarh famous?

A – It is known and popular as a World Heritage Site included in the hill forts of Rajasthan. Built and expanded by Rana Kumbha during the 15–19th century, Kumbhalgarh is also the birthplace of Maharana Pratap, the great king and warrior of Mewar.

Q. What is inside the Kumbhalgarh Fort?

A – The fort has a Ganesh temple which is considered to be one of the oldest temples built inside the fort. It also has the Neel Kantha Mahadev Temple, built in 1458 CE, is the central temple of Shiva, in which the idol is made of black stone which was rebuilt by the Rana Sangha.

Q. Who built the fort of Ranthambore?

Q. How do I reach Ranthambore Fort?

A – Ranthambore Fort For travelers traveling by air, they can land at Jaipur (Sanganer) Airport, where the fort is about 180 km away. Travelers can later avail taxis or buses to safely reach Ranthambore from Sanganer Airport.

A – Gagaron Fort was founded by King Bijaldev of the Doda / Parmar Empire. For a long time, the magnificent fort was not well established in the tourist circuit, but the fame and name of the fort increased from 2013 onwards. Gagron, along with 5 other forts, was declared a UNESCO World Heritage Site.

Q. When was Gagaron Fort built?

A – The Gagron Fort was built by Dod King Bijaldev in the 12th century and the fort was ruled by the Khinchi Empire for 300 years. However, the exact time of manufacture is not known. Historians say that the fort was constructed from the seventh century to the fourteenth century.

Previous article
Red Fort : Explore The History Of The Mughal Dynasty
Next article
RANI KI VAV – WHERE EVERY STEP TELLS A STORY