RANI KI VAV – WHERE EVERY STEP TELLS A STORY 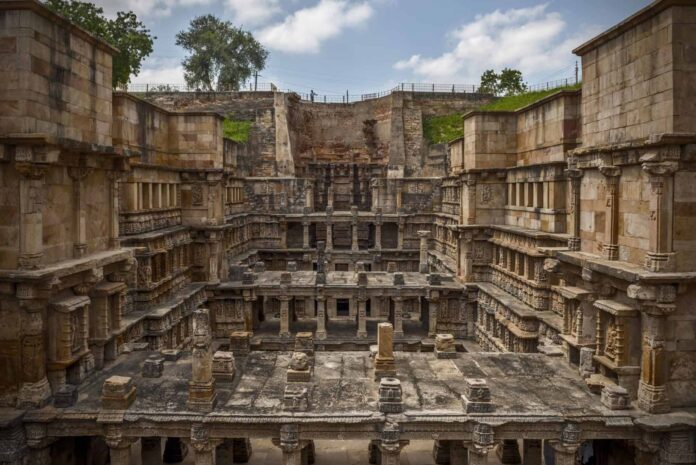 Rani-ki-Vav or Rani ki Bawdi is one of the many UNESCO World Heritage Sites, home to the state of Gujarat. Situated on the banks of the Saraswati River, this stunning architectural marvel was built by Queen Udayamati in memory of her husband, King Bhima I, of the Chalukya or Solanki dynasty (950–1300 CE).

A fine specimen of the Maru-Gurjara style of architecture, UNESCO describes Bawdi as “the height of the artisans’ ability in Bawdi construction”. It is designed as an inverted temple and is divided into seven levels connected by staircases featuring tiled panels of unmatched artistic excellence. Of the seven, the fourth panel is the deepest and leads to a rectangular tank, measuring 9.5 meters by 9.4 meters, with a depth of 23 meters.

The structure has a total of 500 principle sculptures and more than a thousand small sculptures, depicting religious, mythological and secular imagery. Most of the idols are dedicated to Lord Vishnu, in various forms like Lord Rama, Lord Krishna, Lord Narasimha, Lord Vamana etc.

The stepwell is believed to have gone underground due to a severe flood in the Saraswati river, which used to flow nearby. It was revived after decades of laborious restoration by the Archaeological Survey of India (ASI) from the late 1980s.

EVERY STEP TELLS A STORY

A – Rani ki Vav is considered to be the finest in Gujarat and the biggest example of the architecture of Bawdi. It was built at the height of the skill of the artisans in the stepwell construction and Maru-Gurjara architectural style, which reflects the mastery of this intricate technique and the beauty of detail and proportion.

Q. Who got Patan’s stepwell constructed?

A – In 1063, Queen Udayamati of the Chalukya dynasty built a stepwell in the memory of her husband, Bhimdev I. Jain monk, Merutunga’s 1304 composition mentions that Udaymati, daughter of Naravarah Khangara, built this stepwell at Patan.

Q. Rani ki Vav was created by which queen?

A – This stepwell was constructed by Queen Udayamati of Solanki dynasty as a memorial to her deceased husband Bhimdev I in the 11th century. Over the years, as the Saraswati River changed its course, the massive structure was flooded and buried until its excavation by the Department of Archeology survey of India in the late 1980s.

A – The stepwell was excavated by the Archaeological Survey of India in the late 1980s and was found to be in pristine condition.

Q. Who got the queen’s wav constructed?

A – Rani-ki-Vav (Queen’s stepwell) is situated on the banks of the Saraswati river and was initially built as a memorial to a king in the 11th century AD. Queen Udaymati built this stepwell in 1063 AD in memory of her husband Raja Bhimdev I of the Solanki dynasty.

Q. Which state is famous for stepwells ?

A – Stepwells were built in the southwestern region of Gujarat around 600 AD; From there they spread to Rajasthan in the north and later to north and west India.