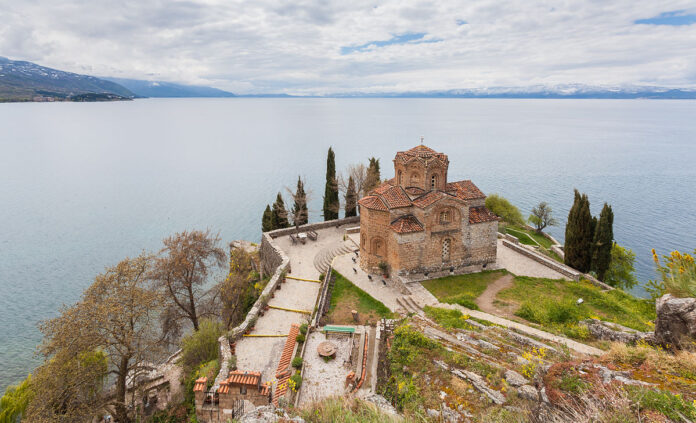 The city of Ohrid, located on the shores of Lake Ohrid, is one of the oldest human settlements in Europe. Built mainly between the 7th and 19th centuries, it houses the oldest Slavic monastery (Saint Pantelejmon) and more than 800 Byzantine-style icons dating from the late 11th to 14th centuries. It is considered the most important collection of icons in the world, after the Tretyakov Gallery in Moscow.

Lake Ohrid, the major part of the protected area, is one of the oldest lakes in the world and, having very pure water, is a natural museum of relict freshwater fauna from the Tertiary period, whose close relatives exist only as fossils. can be found in.

Threats to the site: Eutrophication of previously clean water from various sources is threatened by uncontrolled pollution from the two countries and continued development along the lake.

1979: Lake Ohrid inscribed on the World Heritage List in 1979 under Natural Criterion vii.

1980: Extended to include the historic area of the town under Cultural Criteria i, iii and iv.

Ohrid Lake is in far south-western Macedonia, with a third of the lake in Albania. Its southern coast is within 20 km from Greece. The city of Ohrid is on its north-eastern shore adjacent to Mount Galichica National Park. The lake is located between 40º 54′ to 41º 10’N and 20º 38′ to 20º 48’E.

Dates and History of Establishment

1958: The Macedonian section of Mount Galichica declared a national park in the NRM Gazette 31/58;

1998-2003: International bodies formed to promote cross-border security of the lake.

City of Ohrid has a very ancient lake, located in a deep gorge formed by tectonic subduction at the end of the Tertiary period, 3.5 to 4 million years ago. It is 31 km long by 14.5 km wide, 289 m deep with an average depth of 164 m and 358 km, with an area of ​​229.9 km, of which are in Macedonia. Its watershed of 3,921 sq km is spread over three countries. It draws about half of its water from Lake Prespa via shoreline or underwater springs that lie on the other side of Mount Galicica, to the east of the lake.

This lake, which is partly in Greece, is 158 meters high in level, almost as large as Lake Ohrid, and greatly enlarges the catchment area. The strongest waterfall in the name Shweti on the southeast shore of Ohrid Lake has 15 outlets that spring above and 30 that rise below the water level, providing a quarter of the lake’s total flow. It is therefore significantly free of rich sediments and extremely evident with very slow water turnover rates of 60–70 years and temperatures at depths of about 6ºC, conditions that did not change for millennia until the last century (Mupce, 1998). However, the catchment expanded due to the diversion of the Sateska River into the lake to the north. It was formerly a tributary of the main outflow stream, the Black Drim. This now contributes a high sediment load to the lake from the sand and gravel workings of the riverbed.

The city of Ohrid on the north-east shore of the lake is connected to the National Park of Mount Galichica, a vast ridge of porous limestone karst up to 2255 m above the lake, which divides Lake Ohrid from Lake Prespa.

Neolithic settlements have been found on the shores of the lake, and a town known as Lyknidos existed at the site in Classical and Hellenistic times. It was built by ancestral Phrygians and Illyrians before subjugation by the Macedonians and then by Rome. It was important as a major crossroads on the Roman Via Egnatia from the Adriatic to Constantinople. City of Ohrid was a major Christian center from the early Byzantine period and for nearly eight centuries under the domination of Slavic tribes. The Cyrillic alphabet was developed there. In the 9th century it had a university, the oldest Slavic monastery (Saint Pantelejmon) and several churches that flourished under the Ottomans. There are still at least 30 churches in the Ohrid region alone, many of them specifically listed in the World Heritage Area.

They are decorated with over 800 icons painted in a distinctive style between the late 11th and early 14th centuries, forming an artistic bridge between Byzantine and Italian art. It also houses the most important collection of icons in the world outside of Moscow.

Q. Why is Ohrid Lake on a World Heritage Site?

A – 94,729 hectares, was first inscribed in 1979 for its nature conservation values ​​and a year later for its cultural heritage values. Ohrid Lake is an outstanding natural phenomenon, providing refuge for many endemic and relict freshwater species of flora and fauna dating from the Tertiary period.

Q. What is Ohrid known for?

A – Ohrid is known to have once had 365 churches, one for each day of the year, and is known as the “Jerusalem of the Balkans”.

Q. Is Ohrid worth visiting?

A – There is no doubt that Ohrid is a tourist treasure just waiting to be discovered. Its natural beauty, Instagram-worthy scenery and budget-friendly activities mark it as a must-visit choice for tourists looking for their next location, so visit before the tourist circus begins.

A – If you will only be in Skopje, Bitola and Ohrid, of course, it is perfectly safe to drink tap water. However, small rural areas of the country may not have adequate water safety standards, especially for foreigners with sensitive stomachs.

Q. Is it expensive to travel to Macedonia?

A – Macedonia is the cheapest country in Europe. The most expensive cities in Macedonia are Skopje and Ohrid, but they are still far from what you might consider expensive. There are ridiculously low prices in all other cities, even for people in Skopje.

Q. Can you swim in Ohrid Lake?

A – Lake Ohrid offers spectacular and breathtaking views and there are many good beaches to relax and swim in. It is a wonderful alternative to the sea and wonder with the captivating blue mountain ranges that surround the lake.

Q. Do they speak English in Macedonia?