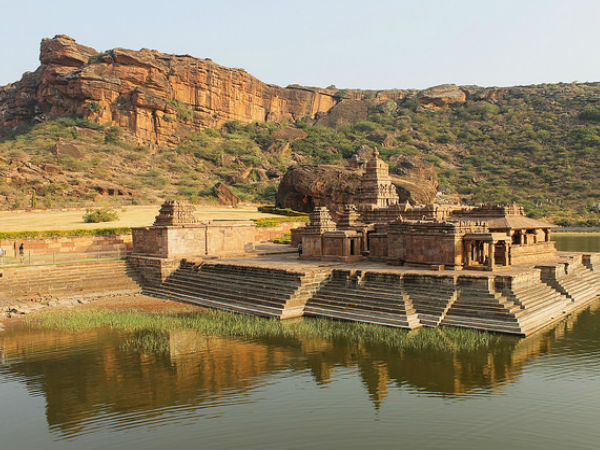 Bagalkot: The northern part of Karnataka, commonly known as Uttara Kannada, is a monumental journey that will surely satisfy your thirst for heritage sites. From cave temples to entire empires in ruins, this strip of the Deccan Plateau houses a rich and varied history of many dynasties within these ruins.

Bagalkot district situated on the banks of the Ghatprabha river allures travelers with its unique temple path. The architectural and workmanship skills are seen in the heritage sites in the hamlet are the epitome of the glorious glory of the Chalukya dynasty.

What to see in Bagalkot?

Situated at the mouth of a ravine between two rocky hills, the exquisite sculptures and rusty red sandstone cliffs of Badami tell a lot. Climb a flight of stairs to reach four ancient rock-cut caves, which are filled with carved pillars and bracket figures, all made of red sandstone, perched on top of a hill.

The largest of them is the third cave, dedicated to Lord Vishnu. The first sculptural ornamentation to dazzle the eyes is the 18-armed Nataraja, with 81 dance postures in the first cave. Overlooking the caves is the Agastya Tirtha Tank, its banks dotted with clusters of Bhootnath temples.

A quiet village on the banks of the Malaprabha River, Aihole is known as the cradle of Hindu temple architecture. There are hundreds of temples in the surrounding villages and farms. The most impressive one is the Durga Temple, which has a height, a raised platform, and a gallery enclosing the sanctum sanctorum.

The Lad Khan Temple, one of the earliest temples, was originally a royal assembly hall and marriage mandap, chosen as the residence of Lad Khan, a Muslim chief.

Huchimalli temple has an idol of Lord Vishnu with a large cobra, Ravanaphadi, a cave temple celebrating the many forms of Lord Shiva, Konti temple complex, Umamaheshwari temple, Jain Meguti temple, and a two-storey Buddhist temple. There are other places of interest.

With its beautifully sculpted temples, this UNESCO World Heritage Site on the banks of the Malaprabha River bears testimony to the richness of Chalukya architecture. Pattadakal reached the pinnacle of its glory under the Chalukya kings and was once used as a ceremonial center where kings were crowned and commemorated.

It consists of a group of 10 major temples, each displaying interesting architectural features. At the entrance of the site, you can see the 8th-century temples of Jambulinga, Kadasideshwara, and Galaganatha with their curved shikaras or shikharas. The largest temple dedicated to Lord Virupaksha has a huge gateway, numerous inscriptions, and many frescoes from the epics. In front of the temple is a mandapa containing a huge Nandi.

The Mallikarjuna temple is similar in design to the Virupaksha temple, but smaller in size. The ornate Papanatha Temple is another impressive piece of architecture, with delicately chiseled ceilings and a 16-pillared main hall. The Sangameshwara Temple, dating from the reign of King Vijayaditya (696-733 AD), is the earliest temple in this complex.

Once a great center for Shaivism, Mahakoot is surrounded by hills. The Mahakuteshwar Temple, dedicated to Lord Shiva, is built in the Dravidian style and has a natural spring pond called Vishnu Pushkarni. The temple is surrounded by several smaller shrines, which have a wealth of carvings on their walls. There are also some Shiva temples in the Mahakuta of the Chalukya era.

Where to stay in Bagalkot?

Situated on the edge of the Bijapur and Bagalkot districts, the backwaters of Almatti Dam host many migratory birds during summer. There is no better view of Almatti Dam available than KSTDC Hotel Mayura Krishna.

The hotel has a bar, restaurant, garden, and free Wi-Fi. The property offers 12 rooms, 2 suites, and 7 cottages. If you wish to visit Bagalkot for sightseeing then the hotel offers free private parking and also provides car rental to the guests.

Badami is best explored in Bagalkot during the day. Apart from the caves, the temple town is also lovely to visit and experience. Stay close to the Caves in Mayur Chalukya, Badami. With a choice of both AC and non-AC rooms, this KSTDC property is the perfect cozy cottage for a retreat post your adventures on the cliff. The hotel also provides a restaurant and beer parlor for the guests.

Previous article
Vijayapura and Koppal: Karnataka’s North Face
Next article
Mandya is a Must-see on your trip to Mysore