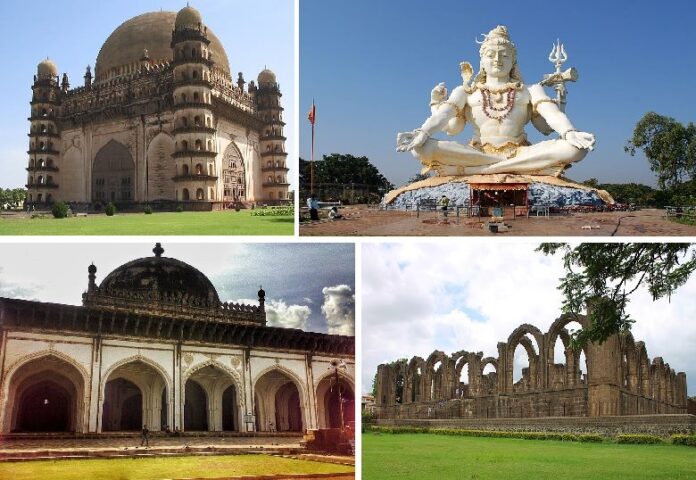 The northern part of Karnataka, commonly known as Uttara Kannada, is a monumental journey that will surely satisfy your thirst for heritage sites. This part of the state is home to unique places that date back to the Stone Age, and mythical cities that have captured the imagination of generations. Vijayapura and Koppal are two such districts that offer culturally rich yet offbeat destinations that are perfect for explorers who want to take the less-traveled path.

Situated in the historically rich Deccan, the erstwhile capital of the Adil Shahi kings (1489–1686 AD) is dotted with mosques, tombs, palaces, fortifications, watchtowers, and fortified gateways, with the giant Gol Gumbaz dominating the landscape.

This magnificent mausoleum of Mohammad Adil Shah has the second largest dome in the world which is not supported by pillars. Built-in 1659, its most striking features are the seven-story octagonal spire at the four corners and the heavily bracketed cornice below the parapet. The Whispering Gallery, which clearly echoes the light whispers eleven times, is an unforgettable experience.

This palatial mosque and mausoleum at Vijayapura are said to be the inspiration for the Taj Mahal in Agra. The tomb of Ibrahim Adil Shah II consists of two buildings standing on a common platform, supported by arches, surrounded by gardens on all three sides.

This unfinished mausoleum of Ali Adil Shah II, with its 12 graceful arches, was conceived on a grand scale that was destined to never be completed. In the center, on a raised platform, are the tombs of Ali Adil Shah II and some of his family members. The tombs are in the basement below, which can be accessed using a door on the east side. The entire structure with its high basement, if completed, would have been the most beautiful monument in Vijayapura.

It is a 55-ton cannon that is sitting on a platform. The head of the cannon is made in the shape of a lion, whose jaws are trying to devour an elephant. Legend has it that if you touch a gun and make a wish, it will come true.

Koppal district is surrounded by Raichur district in the east, Gadag district in the west, Bagalkot district in the north, and Ballari district in the south. Koppal is close to the World Heritage Site Hampi and also covers parts of the ruins of the erstwhile Vijayanagara Empire. It also has several Basadis, which makes it an important destination for Jains as well.

Koppal is surrounded by hills on three sides and was an important city in the history of Karnataka and was also known as Koppana Nagar.

Across the Tungabhadra river is the city of Anegundi, which is older than Hampi. It is located in the mythical kingdom of Kishkindha ruled by Sugriva, the monkey-king of Ramayana. Anjanadri hill near Anegundi is believed to be the birthplace of the monkey-god Hanuman. Anegundi and its serene environs are dotted with temples and fortifications. Near the river, the dilapidated Huchappayana Math temple is known for its black stone lathe columns and fine panels. Other places of interest for tourists are the holy Pampa Sarovar, Armane (a ruined palace), and the Ranganatha Temple.

According to mythology – Lord Hanuman, the monkey god was born in the Anjaneya hill in Hampi in the village of Anegundi across the Tungabhadra river.

There is a temple dedicated to Lord Hanuman on the top of the hill. According to Hindu mythology, he was born to Anjana. You can easily see this hill from a distance, as the slope of the white trail upwards. The idol of Lord Hanuman is carved on the rock. Also, there is a small shrine for Lord Rama and his consort Goddess Sita inside the temple.

Other major attractions of Koppal include the Mahadeva Temple at Itagi, the Mallikarjuna Temple at Kuruvatti, the Koppal Fort, the Gavimatha (a religious temple), and the Malle Mallappa Temple.

Q. Why was the name of Bijapur changed to Vijayapura?

A – The city was founded by the Kalyani Chalukyas in the 10th-11th century and was known as Vijayapura (City of Victory). After the death of the Chalukyas, the city was passed to the Yadavas.

Q. What was the old name of Vijayapura?

A – Vijayapur is a city in Devanahalli taluk and Bangalore Rural district in the Indian state of Karnataka. The old name of Vijayapura is Vadigenahalli.

Q. What is Bijapur famous for?

A – Vijayapura (Bijapur) experienced a great explosion of architectural activity under the Adil Shahi rulers. It is also famous for Lalkal’s hand-made sarees. Vijayapura (Bijapur) is the best base to reach other extraordinary heritage sites like Aihole, Badami, and Pattadakal.

Q. What is the famous food of Bijapur?

A – Anna Idli Griha is one of the most popular food joints in Bijapur. This is a pure vegetarian hotel. They prepare a wide variety of Idli and other South-Indian dishes. Idli is delicious and soft to eat.

Q. Are Bijapur and Vijayapura the same?

Q. Why is Koppal famous?

A – Koppal is known as Jain Kashi, which means “Kashi” or the holiest place for Jains. It was so named because there were over 700 basadis (also known as bastis), Jain meditation halls, or prayer temples.

A – Koppal was the capital of a branch of Shilaharas under the Chalukyas of Kalyana. During Shivaji’s time, it was one of the eight provinces or revenue divisions of the southern Maratha country.

Q. Which is the famous temple in Koppal?

A – Mahadeva Temple The temple in Koppal is extremely famous for its architectural style and intricate detailing.

Q. What is special in the Koppal district?

A – Koppal is also known for its unique wooden Kinhal toys which have a Geographical Indication (GI) tag. Falgun annual fair in Kanakagiri and Anegundi festival are two popular festivals in the Koppal district.

A – Built by the Chalukya ruler Tribhuvanamalla Vikramaditya VI, also known as Mahadeva, this temple is dedicated to Lord Shiva, and also has shrines dedicated to Mahadeva’s parents. Constructed of soapstone, this temple has 68 pillars with exquisite designs and carvings and has a huge hall as well as an anti-chamber.

Previous article
Jyotisar – The Birthplace of Gita
Next article
Bagalkot: A Complete Guide