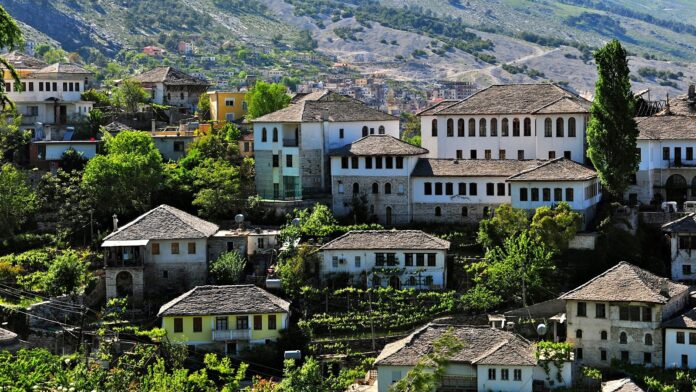 Declared as a museum city in 1963, Gjirokastra is also a World Cultural Heritage (UNESCO Site) since the year 2005. However, today it has become an important center of tourist movement for Albania and beyond. Gjirokaster is located in southern Albania. Only 55 km away from the coastal town of Saranda. Also, 31 km from the border with Greece.

The “Stone City” or the City of a Thousand Steps is situated in a rugged mountainous relief. At the foot of Broad Mountain (Mali i Gjere) with a prime location along the valley of the Drino. In addition, it offers a very rare panoramic view and special impressions.

The castle of Gjirokaster

The palace, which dates from between the VI-XII centuries, has served as the center of this ancient city since the 3rd century AD. It is reputed for its significant architectural, historical and cultural values. But at the same time, as a reference point for events like folklore festivals, wedding ceremonies, photography enthusiasts etc., it serves as a major point not only for the city but also for the surrounding landscape.

Over the centuries, the city has expanded in the form of concentric circles. In addition, fragments of history from the center to the periphery are preserved. But at the same time, of the culture from ancient times to the present day. The stones, bridges, houses, neighborhoods, infrastructure works in every street, preserve the identity and values of Albanian culture. The stone city Gajirokstra has a very invaluable contribution.

Don’t forget to mention, most of the cultural objects like museum houses, cult objects, artifacts,. But at the same time, the infrastructural works date from the medieval period to the present day. Here you can find traces of the descendants of the Cao tribe. However, various Roman, Byzantine, Ottoman invaders have left their mark.

Objects such as the palace, 500 houses of the Ottoman period in the XVII century have been declared a cultural monument. So is the water supply, and artifacts on the palace by Ali Pasha Tepelena, Mosque of Kafi e Pazarit (XVIII century), two churches (XVIII century), ethnographic museum. Italian style buildings built during the twentieth century.

Also, there is a special mosaic in the underground bunker built during the communist period. Both are vast material and spiritual wealth that attracts thousands of tourists to visit. The distinctive houses of Gjirokaster which are reputed for artifacts and stone buildings. There are not only historical values, but also architectural ones. Here we can mention Zakatev’s house, Skandulj, Kadre’s house, etc.

Other tourist attractions not far from this city complement the tourist package. For example, here we can mention the archaeological centers that are near Girocaster, such as: Antigone, Paleocastra, historical settlements such as; A range of cult objects such as Mashkulora, Libohova, mosques, tekkes, monasteries, etc.

In addition, in the surrounding villages as well as in sites with natural values. Such as Sotira, the cave of Skotinis and the karst waterfall of Viroi.

Even the hospitality, generosity, tolerance, wealth in the folklore that characterize the people of Girocaster, traditional cuisine are of added value. As such it attracts tourists who feel at home when visiting this city where the roots of the Albanian nation are located.

Q. How many people live in Gajirokastra?

A – The city of Gjirokastra itself has a resident population of 19,836 inhabitants which is a predominantly urban population.

Q. How old is Gajirokastra?

A – The origin of the city begins with the palace of Gajirokastra, built in the 4th century AD. In 1336 the city was renamed Argyrocastro. In 1417, it was conquered by the Ottoman army. The city reached its zenith in 1800–1830, when monumental assembly houses were built.

Q. How do I get to Gjirokastra ?

A – To get to Gjirokastra , you first need to fly into Tirana, the capital of Albania. Depending on where you are coming from, there are several airlines you can choose from to fly to Tirana.

Q. Is Gjirokastra worth a visit?

A – Definitely go to Gjirokastra , it has a great castle, and is a very lovely old Ottoman town. The museum located in the palace is also worth visiting.