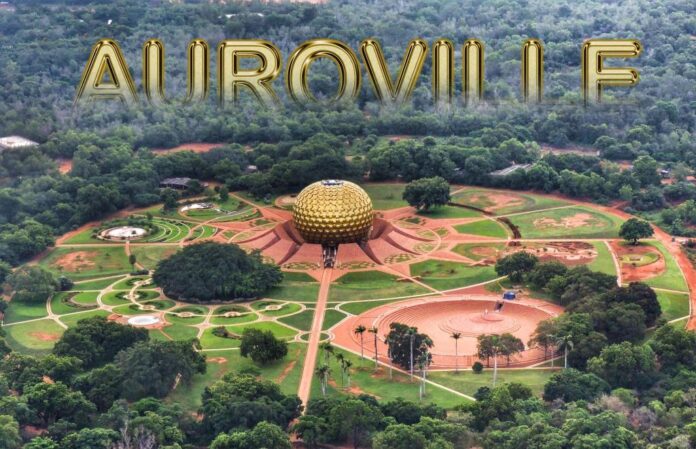 Auroville, near Pondicherry, attracts two types of visitors — the curious who head there on a day trip, and the more serious spiritual seekers who want to experience the way of life there and stay in one of the guesthouses.

1. About Auroville and How to Visit It

Auroville, meaning the “City of Dawn”, is an experiential spiritual community set up with the objective of human unity. It was founded in 1968 by a French woman called “The Mother”. She was the successor of Sri Aurobindo, a renowned Indian spiritual leader whose teachings were based on the concept of integral yoga and surrendering to higher consciousness.

According to The Mother, “There should be somewhere on earth, a place which no nation could claim as its own, where all human beings of goodwill who have a sincere aspiration could live freely as citizens of the world and obey one single authority, that of the supreme truth; a place of peace, concord, and harmony…”.

Hence, one of the goals of Auroville is to be free of religion, politics, and nationality. It’s governed by a statutory foundation (the Auroville Foundation) that’s controlled fully by the Indian government. Members of the Foundation’s board are appointed by the Ministry of Human Resource Development.

Although the government owns and controls Auroville, it doesn’t fully finance the community. Most of the money comes from Auroville’s flourishing commercial industry (which contributes part of its profits), compulsory payments from residents and guests, and donations. The underlying principle at Auroville is that “consciousness develops better in work done as an offering”. All residents are required to take up an activity that’s useful to the community. Residents are also expected to fund the building of their homes, which remain the property of the Auroville Foundation along with the land. Instead of cash, residents use an Auro Card, which functions as a debit card linked to their accounts. Guests are also encouraged to get a temporary Auro Card, although many businesses these days will accept cash.

Auroville’s grounds are surprisingly vast, tranquil, and undeveloped. When Auroville was established, apparently the land was completely barren. It’s now covered in thick jungle, planted by residents. The total area owned by Auroville is 2,000 acres (8 square kilometers). Currently, there are 120 settlements and a population of approximately 2,100 people from 43 different countries, including more than 900 Indian residents. However, this is substantially less than the 50,000 people that were expected to eventually be living in Auroville. The community has around 5,000 employees, many of whom are Indians from surrounding villages.

The idea of Auroville may sound rather blissful. However, Auroville is known to have its problems, particularly to do with money and internal bureaucracy. Substantial funds are required to join the community, and there’s a huge divide between rich and poor. Those who want to join must prove that they can financially sustain themselves by working for free for two years. On top of that, there are the hefty ongoing payments that must be made, and the purchase of a home. The reality is that the community definitely is driven by money, but no one really knows where the money goes. Like any other place, there have been instances of murder, suicide, and sexual harassment as well.

Auroville is located 12 kilometers north of Pondicherry. The most convenient way of getting there is to organize a car and driver from Pondicherry. Expect to pay around 1,000 rupees in return, for a three-hour trip.

The only area of Auroville that’s accessible to casual visitors is the dedicated Visitor’s Center. It’s open daily from 9 a.m. to 5.30 p.m., except during the Diwali and Pongal festivals. There, you’ll be able to watch a video about Auroville, view the informational exhibits, eat at the cafeteria, and buy high-quality products made by the community.

Entry to Auroville’s landmark Matrimandir is highly restricted and the general public is not encouraged to visit it. The reasoning is that it was created for serious spiritual seekers only. However, you can go inside if you make a booking at least a day in advance (see more information below).

It’s possible to stay at Auroville as a guest. Many people enjoy the tranquil atmosphere, and it’s a great way to experience the community without the complications and difficulties of residing there. Numerous cultural and wellness activities and classes are held. You can volunteer at certain projects as well, such as organic farming.

There are various options for accommodations in the settlements. Rates range from a few hundred rupees to over 7,000 rupees per night, depending on the location and facilities. The cheapest guesthouses, which can be described as “rustic”, have thatched roofs and shared bathrooms. It’s necessary to book well in advance, especially from December to March and August to September. You’ll find details of guesthouses on this website and you can contact them directly. The guesthouses generally have a minimum stay period ranging from a few days to a week.

Do note that Auroville is really spread out. So, if you’re staying there, you’ll need to hire a scooter or ride a bicycle to get around.

Located in a serene seaside village between Auroville and Pondicherry, the Quiet Healing Center offers an array of alternative healing therapies, courses, workshops, and events. Expect to pay 5,000-5,500 rupees per night for a double during the high season, including all meals. Substantial discounts are available in the low

2. Matrimandir and How to Visit It

Matrimandir often described as “the soul of the city”, is Auroville’s gold-plated concentration (meditation) dome and shrine to The Mother. According to The Mother, it’s “a place…for trying to find one’s consciousness” and “the cohesive Force of Auroville”.

Construction of the Matrimandir took place from 1971 to 2008. It was designed by French Architect Roger Anger, who was a disciple of The Mother, in accordance with The Mother’s vision. The concept is remarkable and astonishing. The inner chamber of the Matrimandir is completely white, with white marble walls and white carpeting. At its center is a pure crystal globe, measuring approximately 80 centimeters in diameter, that’s infused with electronically guided sunlight. This light is believed to enhance the concentration experience. The Matrimandir also has 12 petals containing 12 meditation rooms, each named after virtues such as sincerity, humility, gratitude, and perseverance. It’s devoid of any images, organized meditations, flowers, incense, and religious forms.

Alternatively, the Matrimandir can be seen more closely from the roadside in a certain area. If you’ve hired a taxi, your driver may know the exact location.

Access to the Matrimandir is highly regulated as it’s been deemed to be for serious spiritual seekers only. If you would like to go inside, you’ll need to make a “request for concentration” at least a day in advance, in person, at the Visitor’s Center. This can only be done between 10-11 a.m. and 2-3 p.m., any day except Tuesday (Matrimandir is closed on Tuesdays). Places are strictly limited and fill up fast. On the day of your appointment, you’ll need to arrive at the Visitor’s Center at 8.45 a.m. to take the shuttle to Matrimandir. Photography is not permitted inside. The last shuttle back to the Visitor’s Center departs at 11.30 a.m.

3. Sri Aurobindo Ashram and How to Visit It

Sri Aurobindo’s concept of integral yoga doesn’t have obligatory practices, rituals, compulsory meditations, or systematic instructions. Devotees are free to determine their own paths. They only need to open and surrender themselves to higher consciousness and allow it to transform them.

The Ashram is a hive of activity. Members work every day in Ashram’s diverse departments, which include farms, gardens, healthcare, guesthouses, and engineering units.

One of the main attractions at the Ashram is the samadhi (burial shrine) of The Mother and Sri Aurobindo. It’s a white marble tomb located in a central, tree-filled courtyard. The Ashram also has an art gallery, library, photo section, visitor’s information center, publications department, and school called the International Center of Education.

The main ashram building is located on Rue de la Marine, in Pondicherry’s French Quarter. It (including the samadhi) is open to the general public from 8 a.m. to noon and 2-6 p.m. However, it can be visited at any time from 4.30 a.m. to 11 p.m. if a pass is obtained. There’s a meditation hall inside the building where you can sit. Visitors can participate in various ashram activities and tours. There’s a group meditation around the samadhi from 7.25-7.50 p.m. on Monday, Tuesday, Wednesday, and Friday. This is open to everyone and no pass is needed.

The Ashram has a few guesthouses that provide accommodations for visitors, although they fill up fast, and advance bookings are recommended. Details of the guesthouses can be found here.