Beer-Themed Attractions – Top 7 Around the World 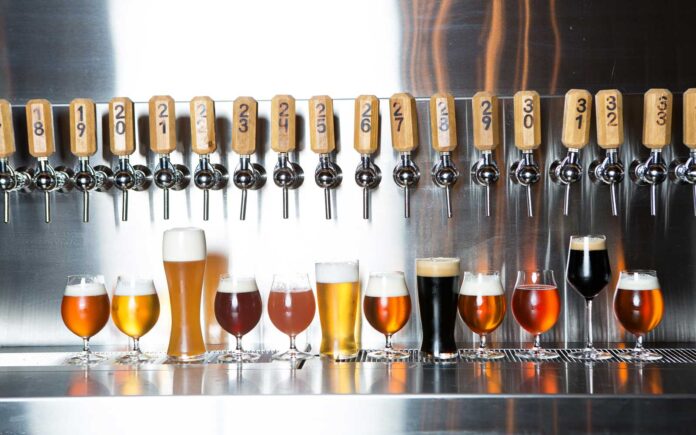 If you’re a beer lover, your travel bucket list might look like a long list of famous breweries you want to visit in other states and countries. But if you truly love the boozy beverage, there’s no reason to stop there. Around the world, there are a number of attractions that take beer to the next level, beyond sipping to spas, train travel, and even a temple. Here are the best beer-themed attractions across the globe.

Are you so devoted to beer that you wouldn’t mind bathing in it? Head over to the beer spa in Karlovy Vary, a historic spa town in the Czech Republic, to make that dream come true. An experience grounded in Bohemian folk medicine, guests are invited to soak in an oak tub filled with beer, yeast, malt, and hops—a vitamin-rich mixture that’s said to promote beneficial health effects like skin rejuvenation and detoxification.

The beer spa isn’t solely about the soak, though. During your visit, you’re free to enjoy as much light or dark Krušovice beer as you can guzzle, right from your tub-side tap. It all wraps up with some relaxing on a wheat straw bed and a helping of homemade beer bread.

You may worship beer but what about a place of worship made out of beer bottles? Far from your average Buddhist temple, Wat Pa Maha Chedi Kaew in Wat in Si, Thailand is made with over 1.5 million bottles of beer—mainly of the green and brown Heineken or Chang variety. The story goes that the temple’s monks started the beer construction in 1984 when cleaning the local landscape of litter.

As more empty bottles have been donated, more structures have been added, including a crematorium and water tower. Now the temple stands as a photogenic tourist stop that illustrates the power of community and recycling.

If you’re always the person who wants to stay a little longer at the brewery, you’ll be delighted to know you never have to leave with a booking at The Doghouse in Columbus, Ohio. Claiming the title as the world’s first craft beer hotel, The Doghouse is located inside an actual brewery from BrewDog, the popular multinational chain.

It’s a true beer lovers’ paradise in the hotel, which has 32 beer-themed rooms each with an in-room beer tap and shower beer fridge. There’s even a 6,000-square-foot interactive craft beer museum on site. Extra bonus: The hotel is dog-friendly, so you’re welcome to bring Fido along.

Another beer-themed structure, Houston’s beloved Beer Can House is covered in flattened and cut beer cans and other beer accouterments like bottle caps and pulls tabs. Found on an otherwise average residential street, the quirky project is the work of John Milkovisch who spent 18 years working on the folk art building you see today with cans saved from his own stash.

When it comes to exactly how many cans make up the house, Ripley’s Believe It or Not estimated that it’s over 50,000. To check out the place, buy a ticket in advance for one of the tours on Saturdays or Sundays, which run every 30 minutes during opening hours.

Its tasty brews are served with a side of scenic views aboard the historic Durango and Silverton Narrow Gauge Railroad’s adult-only Brew Train in the craft beer capital that is Colorado. You can feel like you’re transported back to the 1880s as you ride a locomotive to picturesque Cascade Canyon in the San Juan National Forest. Along the way, passengers are offered a sampling of ales while learning all about the history and brewing process for each.

Once you arrive at the canyon, the beers keep coming with more tastings from various breweries. Often available only a couple of times a year during the summer and fall, this is one you’ll want to book in advance. (This won’t be available in 2021, but you can check the site for future events as you plan ahead.)

For anyone who has a hard time choosing from all the great beer options at their local store, just wait until you get to Beers of Europe in King’s Lynn, United Kingdom. Proclaiming itself the biggest beer shop in Britain, the family-run Beers of Europe started with a hundred or so beers from the United Kingdom, Germany, and Belgium, and now offers more than 1,700 different beers from all over the world, not just Europe.

Peruse their superstore’s massive selection to find a new favorite, or if you’re feeling slightly overwhelmed by the bounty in front of you, just ask one of their friendly staff members for some assistance.

Brewery tours are a dime a dozen, but not many include access to a one-of-a-kind observation tower. With roots dating back to 1300, the Kuchlbauer Brewery in the Bavarian town of Abensberg welcomes visitors to its World of Beer. Most notably, the place features a colorful, storybook-like tower designed by world-renowned artist Friedensreich Hundertwasser that extends 34 meters high and is topped with a gold-plated observation ball. Throughout the inside, you’ll find dedications to Bavarian beer and brewing.

If you want to go up the whimsical Kuchlbauer Tower, you’ll need to join one of their guided brewery tours, which last around 90 minutes. You can also buy an extra ticket to visit their on-site museum, KunstHausAbensberg.

Previous article – Cheapest Countries to Visit from India in 2021