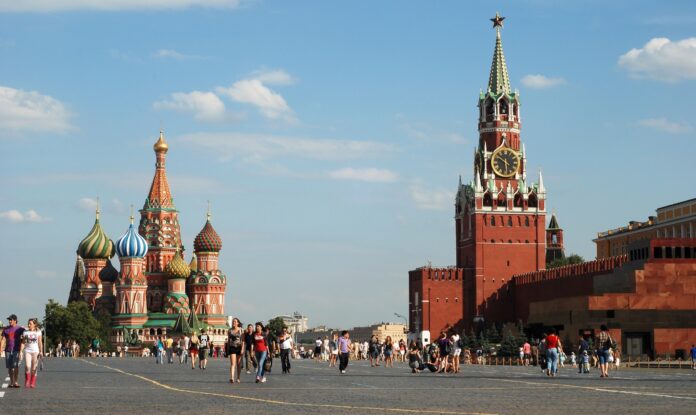 The Moscow Kremlin and Red Square were included in the World Heritage List in 1990. The components of the object are monuments of history and architecture of the XIV-XVII centuries, associated with the main political events and the formation of statehood in Russia, including the “Fortress walls and towers of the Kremlin”, “Archangel Cathedral”, “Annunciation Cathedral”, “Ivan the Great Bell Tower”, “Assumption Belfry and the Philaret Extension”, “Armory”, “Assumption Cathedral”, “Patriarchal Chambers with the Church of the Twelve Apostles”, “Church of the Deposition of the Robe”, “Lobnoe place ”,“ St. Basil’s Cathedral ”,“ Historical Museum ”,“ Faceted Chamber ”,“ Kremlin Museum ”,“ Golden Tsaritsina Chamber ”,“ Mausoleum named after VI Lenin “,” Arsenal “,” Senate “.

Linked to all the most important historical and political events in Russia since the 13th century, the Kremlin (built between the 14th and 17th centuries by outstanding Russian and foreign architects) was the residence of the Great Prince and also a religious center. At the base of its ramparts on Red Square, the Basilica of St. Basilica is one of the most beautiful Russian Orthodox monuments.

In the geographical and historical center of Moscow, the Moscow Kremlin is the oldest part of the city. First mentioned in 1147 in the Hypatian Chronicle as a fortification on the left bank of the Moscow River by Prince Yuri Dolgoruky of Suzdal, the Kremlin was developed and developed with settlements and suburbs that were further surrounded by new fortifications – Kitagorodsky. Wall, Bely Gorod , Zemlyanoy Gorod and others. This determined a radial and circular plan of the center of Moscow, which is characteristic of many other Old Russian cities.

In the 13th century the Kremlin was the official residence of the Supreme Power – the center of the temporal and spiritual life of the state. The Kremlin is one of the major fortifications of Europe in the late 15th and early 16th centuries (the present-day stone walls and towers were built in 1485–1516). It houses a group of monuments of excellent quality.

The most important churches of the Moscow Kremlin are located on Cathedral Square; They are the Cathedral of the Dormition, the Church of the Archangel, the Church of the Annunciation and the bell tower of Ivan Veliky. Almost all of them were designed by invited Italian architects which is clearly seen in their architectural style.

The five-domed Assumption Cathedral (1475–1479) was built by Aristotle Fioravanti, an Italian architect. Its interior is decorated with frescoes and a five-tier iconostasis (15th–17th centuries). The cathedral became the dominant Russian Orthodox church; A wedding and coronation site for great princes, kings and emperors as well as metropolitans and patriarchs.

Another Italian architect in the same class, Alevisio Novi, built the Archangel’s five-domed church in 1505–1508. From the 17th to the 19th centuries, its interior was decorated with wonderful frescoes and an iconostasis. Many great princes and tsars of Moscow are buried in this church. These include Ivan I Kalita, Dmitry Donskoy, Ivan III, Ivan IV the Terrible, Mikhail Fedorovich and Alexei Mikhailovich Romanovs.

The Cathedral of the Dormition was built in 1484–1489 by Pskov architects. Some 16th–19th century frescoes have been preserved inside the cathedral and are part of the iconostasis of Andrei Rublev and Theophanes the Greek. Ivan Veliky’s belfry was built in 1505-1508. At 82 meters high, it was the tallest building in Russia which became the focal point of the Kremlin ensemble.

Of the oldest civilian buildings in the Moscow Kremlin, the most notable is the Palace of the Faces (1487–1491). Italian architects Marco Fryazin and Pietro Antonio Solario built it as a great hall for state ceremonies, ceremonies and receiving foreign ambassadors. The most notable civil construction of the 17th century is the Teremnoi Palace, built by Russian masters.

From the beginning of the 18th century, when the Russian capital moved to Saint Petersburg, the Kremlin played a ceremonial role with mainly religious functions. By the turn of the century the architectural complex of the Kremlin expanded with the armory, which was rebuilt by Matvey Kazakov after the fire of 1797. The Senate was built in 1776-1787 according to the plans of the same architect as the home of the ruling Senate – the highest agency of state power of the Russian Empire. Today it is the residence of the President of Russia.

From 1839 to 1849 a Russian architect K.A. Thon built the Great Kremlin Palace as the residence of the royal family, which included ancient Kremlin buildings such as the Palace of the Facets, the Tsarina’s Golden Chamber, the Master Chambers, the Teremnoi Palace, and the Teremnoi Church. In the armory room K.A. Within the premises of the Great Kremlin Palace, there is a 16th-century museum that was officially established in 1806 by order of Alexander I.

Red Square, closely associated with the Kremlin, is located under its eastern wall. At its southern end is the famous Pokrovsky Cathedral (Cathedral of St. Basil the Blessed), one of the most beautiful monuments of Old Russian church architecture, built to commemorate the victory of Ivan the Terrible over the Kazan Khanate in 1555–1560. .

The cathedral gained its up-to-date appearance in the 17th century due to the decorative finishing and painting of the domes both inside and outside the cathedral. The construction of Red Square was finished by the end of the 19th century with the construction of the Imperial Historic Museum (today the State Historical Museum), the Upper Trading Rows (GUM), and the Middle Trading Rows. In 1929, Lenin’s Tomb, which was built by A.V. A classic example of Shchusev and Soviet monumental architecture was finished.

Q. Is the Kremlin in Red Square?

Q. What is the difference between Kremlin and Moscow?

A – Reference No. The Moscow Kremlin (Russian: осковский ремль, tr. … The name “Kremlin” means “fortress inside a city”, and often refers to the government of the Russian Federation similarly to the “White House”—the executive office of the President of the United States.

Q. What is Red Square in Moscow?

A – Red Square, Russian Krasnaya Ploshchad, the open square known as the Kremlin (Russian: Kreml) in Moscow adjacent to the historic fortress and government center. The Kremlin and Red Square were added to the UNESCO World Heritage List in 1990. Cathedral of St.

Q. Why is Moscow Plaza in front of the Kremlin known as Red Square?

A – The original Kremlin in Moscow began in 1156 as a wooden structure north of the Moskva River. As Muscovite’s power and wealth expanded by the late 1400s, Prince Ivan III commanded the area now known as Red Square – which at the time was a slum or shanty filled with poor farmers and criminals. Lived – was approved.

Previous article
MUSTANG: THE LOST KINGDOM OF TIBET
Next article
Israel: How To Travel Cheap In An Expensive Country