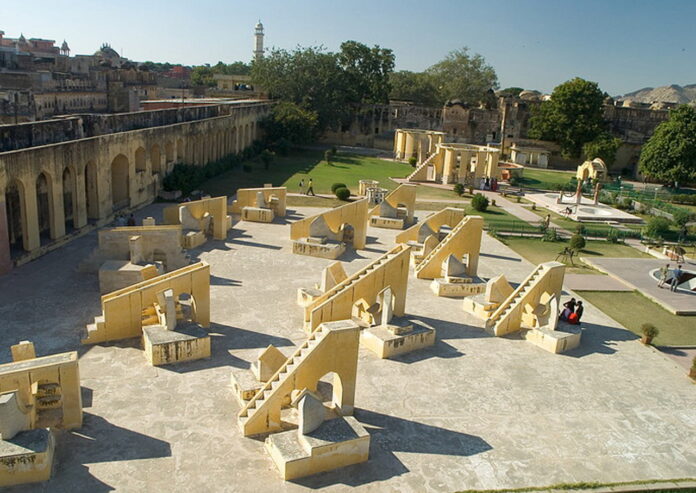 Jantar Mantar is one of the oldest astronomical observatories, featuring the world’s largest stone sundial in the center of Jaipur. It is no longer a functioning science center but is maintained as a memorial, and education activity sessions, guided tours and music and light shows are held here. Jantar Mantar in Jaipur is one of the largest observatories in the world, with notable stone assemblies that help explain the position of celestial bodies and calculate local time. Jantar Mantar, counted as a World Heritage Site by UNESCO, attracts tourists, historians, astronomers, architects, mathematicians and geographers.

The collection of nineteen astronomical instruments at Jantar Mantar allows one to observe the astronomical position with the naked eye. The monument is an example of architectural innovations that were built on the ideas of various religious and social beliefs in 18th century India.

JANTAR MANTAR AND ITS HISTORY

Jantar Mantar is a testament to the architectural brilliance and astronomical innovations of the Rajput era. Built by the founder of Jaipur city, Rajput King Sawai Jai Singh II, the memorial was built in 1734. Maharaja Jai Singh II was a great scholar and had a keen interest in astronomy. The name is derived from the Sanskrit language – ‘Yantra’ to ‘Jantar’, meaning Yantra or Machine, and Mantra to Mantra means to consult or calculate.

The monument is a grand collection of nineteen astronomical instruments, constructed from local stone and marble, and spans approximately 18,700 square meters. Each of these astronomical instruments has an astronomical scale, usually inscribed on the inner layer of marble. Brass bullets, bricks and mortar were also used in the manufacture of these devices. This stone observatory consists of complex instruments whose settings and shapes are scientifically designed, reflecting the glorious past of medieval Indian astronomy. Jantar Mantar has the world’s largest stone sundial – a large smart device.

Jantar Mantar is an observatory with 19 instruments for measuring the position and distance of celestial bodies. These 19 tools are stone-cut structures, which depict interesting geometric shapes.

Popular structures inside the monument-

The large smart device is a giant sun dial in the center of the Jantar Mantar Observatory. The 27 meter long structure is the tallest solarium in the world. ‘Samrat Yantra’ means ‘Supreme Yantra’ is an equinoctial sundial and calculates time up to an accuracy of two seconds.

Popularly known as a small smart device, the device is small in size, and measures local time to an accuracy of twenty seconds. The ramp of this solarium points to the North Pole, so local time in Jaipur can be easily calculated by measuring the position of the ramp’s shadow on the carved scale partitions.

The Ram Yantra measures the height and azimuth of the Sun and planets, and consists of a pair of tube-shaped structures, open to the sky. Each tube-shaped structure has a pillar of equal height at the center. Inside the walls of these structures are carved scales showing the elevations of celestial bodies and the angles of azimuth. The Ram Yantra is found only at Jantar Mantar in Jaipur and New Delhi.

The device consists of two semicircular bowls such as a solarium with graded marble slabs. Using the inverted image of the sky and the motion of the inverted shadow on the slab, the altitude, azimuth, the angle of the hour and the exact position of the heavenly bodies are detected.

The Chakra Yantra, as the name suggests, is a ring instrument that measures the angle of coordination and the hour of the Sun.

Digamsa is a pillar-like structure between two concentric outer circles, which is used to predict the time of sunrise and sunset in a day.

Consisting of a pair of circular plates facing the north and south, the river is the symbol of the two hemispheres of the earth.

Karanti Vritya is a special device that is used to measure the solar sign of the sun during the day.

If you are someone who likes to look up to the sky to find a small star several light years away, and want to know more about medieval astronomy, then Jantar Mantar in Jaipur is a must for you. When you visit this place you have the option to hire a guide, as it is always fascinating to know more about the history of the monument. However, audio guides are also available to help you learn the importance of each structure and it also gives a background about astronomy. The entry time for Jantar Mantar in Jaipur is from 9 am. Entry tickets to the memorial can be purchased either at the entrance or online until 4:30 pm. Indians can buy tickets for 50 rupees and foreigners for 200 rupees.

Q. What is special about Jantar Mantar?

A – Jantar Mantar is an observatory built in 1724 by Maharaja Jai ​​Singh of Jaipur. The essential objective of Jantar Mantar was to accumulate astronomical tables which in turn would help in predicting the time and speed of celestial bodies such as the Sun, Moon and other planets.

A – The Observatory in Jaipur is the most important and best preserved set of fixed monumental equipment built in India in the first half of the 18th century; Some of them are by far the largest manufactured in their categories.

Q. How many jantar mantras are there in India?

A – There were five Jantar Mantars in India, the largest of which is in Jaipur, which has the largest stone sundial in the world as well as many instruments. Currently only four Jantar Mantars exist, as it was disbanded in Mathura just before the 1857 rebellion.

Q. What is the difference between Delhi and Jaipur Jantar Mantar?

A – There is a smaller version of the observatory in Delhi while in Jaipur it is more elaborate. It has the world’s largest stone sundial “Samrat Yantra”.

A – Jantar Mantar Jaipur is a stone sundial designed to collect astronomical data. The structure uses the position of the sun and the direction of the shadow to tell time in ancient days.

Q. Who built the Jantar Mantar in Jaipur?

A – The Jaipur Astronomical Observatory, believed to have been built by the enlightened ruler Sawai Jai Singh II in 1729 – is one of the most accurate pre-modern observatories in the world, and to improve understanding of planets and other cosmologies of the eighteenth century. Certifies efforts. Movements.

Q. What is the largest solarium in the world?

A – The Jaipur Observatory in Rajasthan, which houses the instruments, is the largest and best preserved of the ancient large observatories. The Samrat Yantra (translation: Supreme Yantra) is the largest sundial in the world.

Q. Why Jantar Mantar was made?

A – “Jantar Mantar” literally means “instrument for measuring the harmony of heaven”. It consists of 13 architectural astronomy instruments. The site is one of five built by Maharaja Jai ​​Singh II of Jaipur revising the calendar and astronomical tables from 1723.

Q. Is Jantar Mantar a museum?

A – Yes, its an outdoor museum of thirteen architectural and astrological instruments.