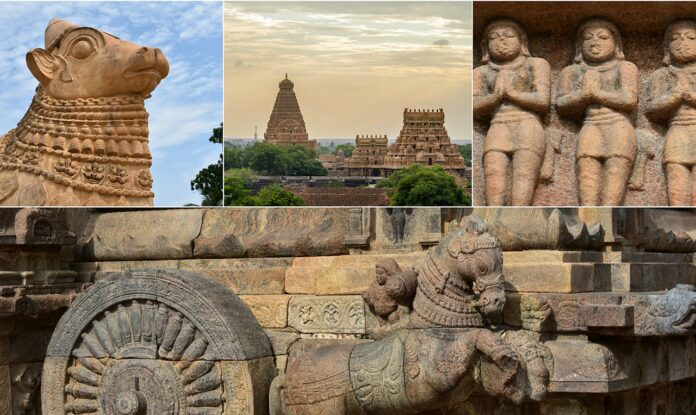 Its 53 meter vimana (garbhagriha tower) has corners and a beautiful upward curved movement, which is opposite the straight and grave tower at Thanjavur. The Airavateshwara temple complex built by Rajaraja II in Darasuram has a 24-meter vimana and a stone image of Shiva. The temples bear testimony to Chola’s splendid achievements in architecture, sculpture, painting and bronze casting.

The great Cholas established a powerful monarchy in and around Thanjavur in the 9th CE. He enjoyed a long, eventful reign lasting four and a half centuries with great achievements in all areas of imperial endeavors such as military conquests, efficient administration, cultural assimilation, and the promotion of the arts. The three temples, Brihadisvara at Thanjavur, Brihadisvara at Gangaikondacholapuram and Airavatesvara at Darasuram are surviving temples. The tradition of temple worship and rituals established and practiced over a thousand years ago, still based on the old Agami texts, continues daily, weekly and annually as an inseparable part of people’s lives.

These three temple complexes therefore form a unique group, which displays the progressive development of high Chola architecture and art as well as encompassing a very specific period of Chola history and Tamil culture.

It is popularly known as Tanjai “Periya Koil” [big temple]. The great Chola emperor Raja Raja Cholan I [985-1012] dedicated this temple to Lord Shiva in the year 1010 AD. This temple celebrated the 1000th year of its existence in the year 2010. It is situated between the fortified walls, which is believed to have been added in the 16th century. This great temple speaks of the architectural excellence of the area. The tower above the sanctum sanctorum is 216 feet high.

This tower is the tallest tower of its kind in the whole world. Kumbam or Chikaram is a bulbous structure atop a rock-cut tower, weighing around 80 tonnes, considered a show case of architectural excellence of that period. It is believed that Kapola / Sikram, built from a village called Sara Pallam, more than 5 kilometers away from the big temple, is now called Vayalur.

The elevation of the royal tower and dome to the top is a testimony to the engineering prowess of the Chola architects, who planned its construction in such a way that the shadow of the dome would not fall on the ground. In front of the sanctum sanctorum, a sacred bull or Nandi weighing 25 tons is made of 12½ feet long, 4 feet long and 5 feet wide. The lingam is 13 feet long, with a circumference of 54 feet.

Located on the outskirts of Kumbakonam, Darasuram has many ancient temples of great architectural merit. Airavateshwar Temple is the most important of them all. Shiva is said to have appeared here as a ‘Rudraksha’ tree. A temple here was built in the 12th century by the Chola king Raja Raja II and is derived from the story of Airavath, another legend related to a white elephant from India, who bathed in a pond here for its white color Was miraculously restored.

After the sage Durvasa replaced it with a curse. In front of the main temple is the Alankar Mandapa which has a fine pillar of pillars, each of which has square panels on the sides, which are carved with scenes of Haivite traditions. On the south front of this pavilion, each side of the base has large stone wheels and a horse and thus the mandapa has the appearance of a chariot, which is decorated on the occasions of the festival with the deity. Other temples in its enclosure are sculptural representations of Parvati, Yama, Subramanya, Saraswati, and Saptamatrakas and various Shaiva devotees. It is a UNESCO World Heritage Site which comes under the great living Chola temples.

Gangaikondacholapuram was the capital of Rajendra Chola (1012–1044 AD), the son and successor of Raja Raja Chola. According to history, Rajendra Chola conquered many northern states to bring the holy waters of the Ganges River to his kingdom. As a token of celebration, he created a ‘liquid pillar of victory’ (Jalamaya Stambha), a tank where the vassal kings contributed Ganga water as a tribute to the victor. So they were called Gangaikondchol – the Chola kings who brought the Ganges – and the city was named after them.

The temple dedicated to Lord Brihadeeswara located here is in many ways similar to the temple of Tanjore. There are some attractive sculptures of Mahishasuramardini, Nataraja, Ardhanarishwara, Chandikeshwar etc. Recently, the State Archaeological Department has unearthed the remains of a royal palace built by Rajendra Chola I at a site in Maligaimedu, 2 km south-west of Gangaikondacholapuram. It is a UNESCO World Heritage Site which comes under the great living Chola temples.

Q. How many Chola temples are there?

Q. What are the main features of Chola Temples?

A – Features of Temple Architecture of the Chola Empire

Q. Which temple is the finest example of Chola temple architecture?

A – The Brahadeeswarar temple at Thanjavur is the greatest achievement of Chola architects.

Q. How do I reach the Chola temple?

A – Located at a distance of 280 km from Chennai, this temple can be easily reached by bus and train. This magnificent temple was built by Rajendra Chola I in 1035 AD.

Q. What was the role of temples during Chola temples?

Q. Which is the best example of Chola temples?

A – The Brahadeeswarar Temple is the best example of the Chola temples located in Thanjavur which were built by the Chola king Raja Raja I. Explanation: The king had received a divine order to build in his dreams. The temple was very magnificent in its design and beauty.

Q. Why are Chola temples built?

A – The Chola rulers were great builders and during their reign most magnificent temples were built in South India. He ruled for around 1500 years and during his rule the temples became the center of importance. Spectacular in architecture, many official ceremonies were held in Chola temples.

Q. What is a specific art associated with Chola temples?

A – They were not only places of worship, they were also centers of economic, social and cultural life. The most distinctive was the construction of bronze statues, amounting to the crafts associated with the temples.

Q. Why did the Chola kings build big temples?

A – The Chola rule carried forward the Dravidian architecture of temple-building laid down by the Pallavas but took their design to the next level. They used granite to construct statues of warriors, kings, dancers, deities and more. The temples built by him were huge, standing tall to reflect his glory.

Q. Why is Brahadeeswarar temple important?

A – This ancient temple is located in Thanjavur district of Tamil Nadu. Brihadeeswarar Temple is a revered temple for Hindus, which they offer to Lord Shiva (God of Destruction). This temple is one of the largest temples in India, and one of the highest talents of Indian architecture.

Q. What is the specialty of Brihadeeswarar Temple?

A – Known as the ‘big temple’, the Brihadeeswarar Temple is dedicated to Lord Shiva and is one of the largest temples in the country. And make no mistake, this temple is 1000+ years old and the tower of the temple is 214 feet high, making it the tallest in the world.

Q. Which Chola temple has been declared a World Heritage Site by UNESCO and why?

A – The Airavateshwara Temple was referred to by UNESCO as the Great Living Chola Temple and was declared as a UNESCO Heritage Site in the year 2004. It is a Hindu Shaiva temple built by Rajaraja Chola II in the 12th century.

Q. What are the activities related to Chola temple?

A – The temples were the centers of craft production. Thus we find many people besides priests, who were engaged in various activities, which were associated with a Chola temple. They were – garlanders, cooks, sweepers, musicians, dancers, craftsmen etc.

Q. What are the temples built by rajaraja and Rajendra?