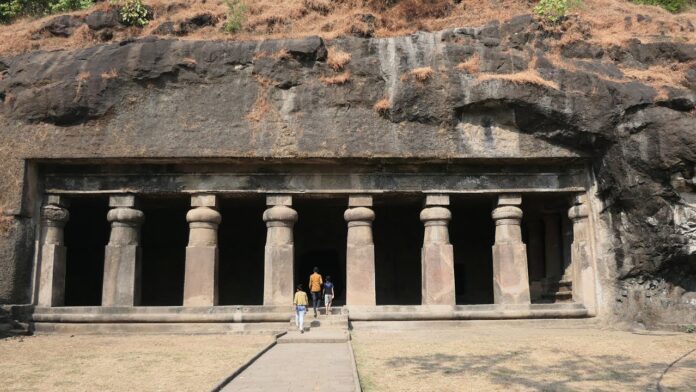 Elephanta Caves is a group of caves located at Gharapuri on Elephanta Island in Mumbai Harbor. Located on the projection of the Arabian Sea, the island consists of two cave groups, the first group consists of five Hindu caves and the second two Buddhist caves. The Hindu caves consist of rock-cut sculptures dedicated to the Hindu god, Lord Shiva and represent the Shaiva, a Hindu sect. The caves are carved out of basalt solid rock. The rock-cut cave architecture dates back to the 5th – 8th century.
Cave 1 or Mahan or the main cave was a place of worship for the Hindu deities. After Portuguese rule began, the caves were largely damaged. These caves were repaired and are now preserved as UNESCO World Heritage Sites since the year 1987 and are now looked after by ASI or Archaeological Survey of India.

Historians have dated the Elephanta caves and believe it to be of the 5th – 8th century period. The caves are of historical importance and can be traced to the defeat of the Mauryan rulers who controlled the Konkan Empire by Emperor Pulakesi belonging to the Badami Chalukya dynasty in the Battle of 635 AD. Some historians claim that these caves belong to the Konkan Mauryas. Others claim that the caves belong to the Kalchuris.

Elephanta Caves are located in an island off the Mumbai coast and can be reached by ferry from the Gateway of India in Mumbai. The city of Mumbai is well connected to many other cities around the world. Therefore, tourists wishing to visit the caves first have to fly to Mumbai or take a train. The city also has a good railway network and tourists on the local train can reach CST or Chhatrapati Shivaji railway station or Church Gate. From here, travelers have to reach the Gateway of India, which is a 20-30 minute walk or 10 minute ride in a taxi. Travelers can also avail bus or taxi service from Church Gate to reach the Gateway of India. Finally the caves can be reached in a 60-minute ferry ride from the Gateway of India. Ferry boats are available every 30 minutes. A round trip ferry ticket costs Rs 120 for one person. The cave temple is located at a distance of about one km. Away from the pier.

The caves are open on all days between 9a.m. to 5p.m. except Mondays. The entry fees are Rs.10 for the Indians and Rs.250 for the foreigners.

THINGS TO DO IN AND AROUND

The caves of Elephanta Island are worth visiting. The main cave has a Shiva lingam and has two doors. These temples are guarded by guardians. Shiva Lingam is worshiped daily by devotees. Symptoms of Damahae are seen in many caves which usually occur during the rainy season.

There is a small toy train that takes passengers from the ghat to the bottom of the hill and charges R.5 from one side. Travelers can reach the entrance of Gharapuri village by walking on the ghat and the entrance fee of the village is 5 rupees.

Q. Who built the Elephanta caves?

A – Elephanta Island is located 10 km from the Gateway of India in Mumbai in Maharashtra. The cave temple dedicated to Lord Shiva was excavated in the 8th century by the Rashtrakuta kings, who ruled the region between 757-973 AD.

Q. Can we go to the Elephanta Caves?

A – Elephanta Island and Caves are located about 10 km (about an hour long ferry ride) from Mumbai. … After an hour-long journey you are dropped off at a ghat, a short train (10R) is allowed to take you to the base of the island, then it goes through the souvenir stalls to the entrance to the caves There is one more kilometer from it. .

Q. Where are the Elephanta Caves located?

A – Elephanta Caves are located on Elephanta Island (otherwise known as Gharapuri Island) in western India, featuring two hills separated by a narrow valley. The small island is full of many ancient archaeological remains which are the only evidence of its rich cultural past.

Q. Who destroyed the Elephanta caves?

Q. Why are Elephanta Caves Famous?

A – The Elephanta Caves are a UNESCO World Heritage Site and have a collection of cave temples primarily dedicated to the Hindu god Shiva. Elephanta caves have stone cut sculptures that reflect the coherence of Hindu and Buddhist ideas and statues. The caves are carved with solid basalt rock.

Q. How were Elephanta caves built?

A – The Elephanta caves are made of solid rocks. Trimurti Sadasiva is the main idol inside the Elephanta caves. The image, 20 feet in height, is of a three-headed God, who represents Panchamukh (the five-headed) Shiva.

A – It is closed on Mondays and the Elephanta Caves timings are from 9am to 5pm.

Q. Is Elephanta Caves Worth Visiting?

A – Yes, if you are a lover of Indian culture and ancient architectural techniques, then the Elephanta caves are worth visiting. It is called the glorious abode of Lord Shiva. A symbol of Hindu cave culture, Elephanta has seven caves, the most notable of which is the Mahesa-Murti cave.

Q. How long does it take to reach Elephanta Caves?

A – Generally, you should allow 4 to 5 hours to travel to the elephant caves. Depending on your level of interest in the place and whether or not you want to do a more detailed and thorough tour, the time taken may be shorter or longer.

Q. Why is the island called Gharapuri?

A – The name Elephanta Island (Portuguese: Ilha do Elephant), known as Gharapuri (or, ‘place of caves’) in ancient times, was given by Portuguese explorers of the 16th century, an elephant near the entrance. After seeing the monolithic basalt sculpture. This island was once the capital of a powerful local empire.