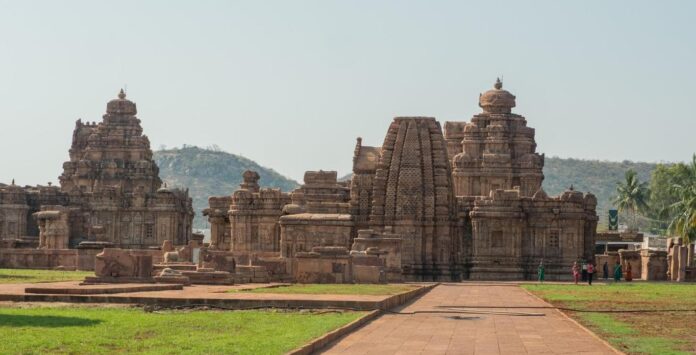 Pattadakal – Situated on the banks of the Malaprabha River, this UNESCO World Heritage Site is a testament to the richness of Chalukya architecture during the 8th and 8th centuries and is famous for its intricately carved temples. The temples at Pattadakal bear testimony to the richness and timeless splendor of Chalukya architecture. It consists of a group of 10 major temples, which display some striking architectural features. The world famous geographer Ptolemy (150 AD) has documented the city as “Parthi Gall”.

It was even used as a ceremonial center where kings were crowned and remembered. The architecture of the temple from Dravidian, Aryan at Pattadakal and its temple complex is a mixture of both styles; Probably making it the only one of its kind in India. Within the Pattadakal temple complex is a sculpture gallery maintained by the Archaeological Survey of India.

Reasons for Inscription: According to Criteria Nos. (Iii) and (iv) the monuments at Pattadakal were declared as World Heritage Sites. Despite being a specimen of the great Chalukya architectural style, the monuments here display a unique blend of Dravidian as well as Indo-Aryan style of architecture. The temples found at Pattadakal are designed with a mixture of architectural designs starting from the Nagara, Rekha, Prasad and Dravidian aircraft styles of temple construction.

Group of Monuments at Pattadakal

Pattadakal represents a high point of liberal arts, which under the Chalukya dynasty received a harmonious mix of architectural forms from northern and southern India in the 7th and 8th centuries. An impressive range of nine Hindu temples as well as a Jain sanctuary can be seen there.

Three very closely located sites in the state of Karnataka provide a remarkable concentration of religious monuments from the Great Dynasty of Chalukya (c. 543–757). There are two consecutive capital cities – Aihole (ancient Aryapura), Badami, and Pattadakal, the ‘City of Crown Rubies’ (Pattada Kisuvolal). Furthermore, the latter was, for a short time, the third capital of the Chalukya kingdom; At that time the Pallavas captured Badami (642–55).

While Aihole is traditionally considered a ‘laboratory’ of Chalukya architecture, with monuments such as the temple of Ladakh (c. 450) that foreshadow the political successes of the dynasty during the reign of King Pulakeshin I, the city of Pattadakal was a liberal one. K denotes apogee. Art, which acquired a harmonious mix of architectural forms from the north and south of India, in the 8th and 8th centuries.

The temple was built by Rani Lok Mahadevi, wife of King Vikramaditya II, after successful military operations at Kanchipuram. The temple has a huge quadrilateral surrounded by small cells or temples. It has a huge entrance and a small gate behind it. There is a Nandimantapa at the entrance which is supported by large pillars. The great hall of the temple has a roof which rests on 16 huge square pillars arranged in 4 rows. These pillars have exquisitely crafted the epics of the Puranas. It is believed that the Kailasa temple at Ellora was built on the model of Virupaksha temple.

It was originally called Trilokeshwar Maha Saila Prasad and was built by Rani Trilokya Mahadevi in ​​about 740 AD. Architecturally, almost like the twin of Virupaksha Temple, Mallikarjuna Temple was built for the same purpose, at the same time Virupaksha Temple which stands next to it. Ramayana and Mahabharata episodes are engraved on the inner walls.

Sangameshwar Temple, built during the reign of King Vijayaditya, is the oldest temple. It has a sanctum sanctorum with Dravidian aircraft. The outer walls of the sanctum house have statues of fiery Narasimha and Nataraja.

The Galaganatha Temple is a dilapidated temple dating back to the 8th century AD and has a northern-style curved spire. The peak has all the Amalaka motifs with one final vertex. It is a Shiva temple with a Shivling in black basalt.

This is another temple with a curved spire. The inner roof of the Kashi Vishweshwara Temple has figures of Bal Skanda surrounded by Shiva, Parvati and Dikpalas.

The Papanatha temple is mentioned as ‘Mukteshwar’, which seems to have been completed around 740 AD. It has a frontal pavilion, shabhamantapa, ante chamber and a square sanctum sanctorum. The architecture of this temple is a mixture of Dravidian and Nagara styles.

It is a small temple with a curved shikara behind the Galganath temple. It has figures of Vishnu, Ardhanarishwara and Lakulisha on its outer walls.

It is similar in design to the Jambulinga temple. There are beautiful images of Shiva and Parvati at the entrance, seated on a Nandi, which is between Brahma and Vishnu.

Outside the city there is a huge Jain Basadi built in the 9th century AD. This temple has been constructed in the Rashtrakuta style with huge elephants welcoming visitors at the entrance.

BY AIR
Nearest domestic airport to Pattadakal is Belgaum whereas, Bengaluru is the n

BY RAIL
Badami is the nearest rail head to Pattadakal. Private cabs are available on hire.

BY ROAD
Buses to Pattadakal are available from all major cities like Bengaluru, Belgaum, Bijapur, and Hubli.

Q. What is Pattadakal famous for?

Q. Which god is Pattadakal?

A – The Papnath temple at Pattadakal is dedicated to Lord Mukteshwar. It is situated to the south of the Virupaksha temple area. It was built in 740 AD.

A – After the fall of the Vijayanagara Empire in 1565, Pattadakal was annexed by the Sultanate of Bijapur, which was ruled by the Adil Shahi dynasty. At the end of the 17th century, the Mughal Empire under Aurangzeb gained control of Pattadakal from the Sultanate.

Q. Pattadakal is in Hampi?

A – Pattadakal Hampi Karnataka. The integration between the well planned city of Hampi with its natural setting and architectural grandeur speaks of the artistic skills of the then architects.

Q. What is the old name of Pattadakal?

A – Pattadakal, formerly known as Raktapura, is a small town in Bagalkot district in north Karnataka, India. It is famous for UNESCO World Heritage Site. The Pattadakal region was inhabited in prehistoric times, as evidenced by the megalithic dolmens.

Q. Who built the Papnath temple at Pattadakal?

A – The temples of Pattadakal are grouped together and oriented towards the east. The Papanatha temple was built during the 8th century in the early Chalukya period.

Q. Who destroyed the Pattadakal temples?

A – After the fall of the Chalukya Empire, the city was under the rule of several other states. In the 13th century, during the reign of the Delhi Sultans, the city was raided and looted, and many temples were destroyed and looted.

Q. Who built the Sangameshwar temple?

A – Sangameshwar Temple, formerly called Vijayeshwar Temple, is a religious site in Pattadakal. It was built by the Chalukya king, Vijayaditya Satyashraya in about 733 AD.

Q. Who built Pattadakal and Aihole?

Q. How many temples are there in Pattadakal?

A – Pattadakal, the capital of the Chalukya dynasty of medieval India, is 22 km from Badami and 514 km from Bangalore. This famous World Heritage Site has a group of ten major temples, each exhibiting interesting architectural features.