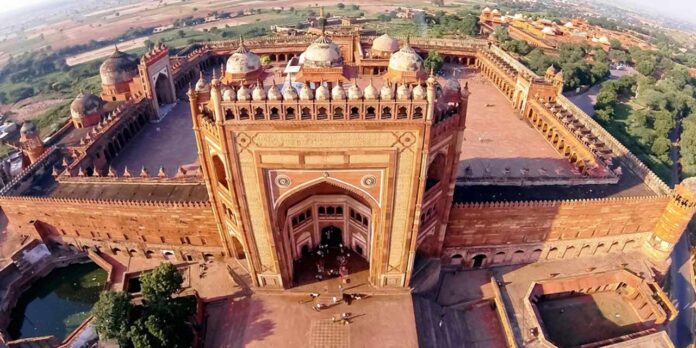 Located 40 km from Agra, Fatehpur Sikri is a city in Agra district and is a famous tourist attraction. Fatehpur Sikri, a city made mainly of red sandstone, was founded by the Mughal emperor Akbar in the 1571 century. It is essentially a fortified city built by the king and has been the capital of his empire for fifteen years. Now a UNESCO World Heritage Site, it is the palace of Jodha Bai, Jama Masjid, Buland Darwaza, and Salim Chishti’s Tomb among many other famous monuments. Derived from Arab and Central Asian tent camps, the Imperial Complex is a work of pavilions arranged in formal geometry on a piece of land.

A unique blend of religious excellence as well as religious beliefs – is the essence of Fatehpur Sikri. It was built by Akbar to honor Sheikh Salim Chishti, whose prediction of the birth of the Mughal heir came true when Akbar was visiting the erstwhile city of Sikri. In honor of the prophecy, Akbar built this city and Jama Masjid, a stunning mosque that is still in use today. He also built three palaces for each of his favorite wives, a Hindu, a Muslim and a Christian. An Indo-Islamic masterpiece, Fatehpur Sikri looks its best during sunset.

The Hall of Public Audience, as the name suggests, was for holding public meetings and gatherings. Public grievances were settled here at the hands of the emperor. It is a multi-sided rectangular pavilion-like structure that faces substantial open space. Standing on 49 pillars, the Diwan-i-Aam has a Jharokha type chamber which is also known as Takht-e-Murasa. All the pillars and walls of this place have beautiful decorations. The marble baskets are where the ministers were supposed to sit. Two entrances and three corridors divide the hall.

Built in Persian architectural style, the building was a private audience hall. Only royal members gathered here to discuss personal matters. It has a roof with four umbrellas. The central pillar with square base and octagonal shaft has brought the architectural masterpiece to fame. Floral and geometrical designs enhance the beauty of the base and shaft. Furthermore, these thirty-six revolving paths serve as the platform support for Akbar. These four stone walkways are connected to every corner of the building on the first floor.

Built in 1585 AD, the ibadat khana or puja ghar was a meeting house where Akbar laid the foundation stone of Din-i-Ilahi. Here spiritual leaders of various religions gathered to discuss the teachings of their respective religions.

An extraordinary structure in Fatehpur Sikri, Panch Mahal has the design elements of a Buddhist temple. The pillar as a whole, it has a four-story asymmetrical building on the ground floor in decreasing shape. The structure consists of 176 pillars with lattice or curtains suggesting the presence of the curtain practice that the Queens were to follow.
The pavilion offers a spectacular view of the fort. Panch Mahal has a pool in front of it, Anoop Talab which was once a setting for music festivals.

The tomb is the most beautiful example of Mughal architecture, setting the tomb of the Sufi saint, Salim Chishti. It finds its place in the courtyard of the mosque. Emperor Akbar undertook the construction of this mausoleum in honor of Salim Chishti, who predicted the birth of Jahangir, Akbar’s successor. The main building of this mausoleum is surrounded by marble curtains from all around. The main room door is beautifully engraved with Quran patterns and inscriptions. Multicolored stones are placed on top of the marble floor. The inner chamber of the mausoleum has a wooden umbrella where the mother of pearl has a mosaic. The tomb is known for its childbirth blessings. Devotees from all over the country come to visit this mausoleum with the hope of fulfilling their wishes. People tie threads on marble curtains to remind Salim Chishti of his aspirations.

It was a mass mosque which was one of the first buildings built in the city. Built in the 17th century, the Jami Masjid is now a World Heritage Site. Also known as the Friday Mosque, it is the most visited place in Agra. Devotees consider it a place of pilgrimage.

It has a single dome with two colonnade halls on either side. The carved mirabs adorn the two small rooms and the main room. The mosque is a transition to Islamic architecture mixed with the Persian style. Visitors find golden inscriptions on a royal blue background which is a tribute to this fusion. Next, the interiors are embellished with watercolor paintings that give a glimpse of stylized floral designs. The corbel pendants support the dome more generally than the squinches that support the domes.

The gate of grandeur, the Buland Darwaza symbolizes kbar’s victory over Gujarat. It is a grand gate that leads from Agra to Fatehpur Sikri. The grand door is the fruit of 12 years of continuous work. Made of red sandstone and decorated with white and black stones, it is 50 meters from the ground. The arch has two inscriptions, one of which reads: “Mary, the son of Mary, said: The world is a bridge, pass over it, but do not build a house on it. He who hopes for an hour hopes for eternity.” Can do. The world lasts for an hour. Spend it in prayer, the rest is unseen “.

Also known as Harkabai or Jodha Bai, Maryam-uz-Zamani was the wife of Emperor Akbar, whose dedication to the palace came into existence. It is an architectural delight for people visiting Fatehpur Sikri. The palace displays a compelling blend of Rajput and Mughal architecture. Situated on the eastern side of the court, this place was home to the Rajput queens of Akbar and other members of the harem.

The octagon at the base, circular in the middle and thin at the top, is a unique construction of the deer tower. Initially it was considered a monument to Akbar’s favorite elephant, later it served as the object of Akash Deep during Akbar’s reign. It became a starting point for various mileposts.

A favorite of Akbar, Birbal was a Hindu minister in his court. The palace finds its location near the northwest corner of Jodha Bai’s palace. It has four rooms with open doors. There are also two rectangular verandahs. They have a pyramidal roof with a triangular roof. The interior is filled with single border designs, Arabic geometric designs and floral designs. The first floor has beautifully decorated jharokas and balconies. The domes have inverted lotus and vase carvings. Tile work can also be seen here.

A clone of modern-day offices, the office was Khanna’s record room. It was the place to be given to important files and documents associated with his reign. This building, built on a high platform, has façades all around. Inside is a room with three doors to its north and beautifully carved treasury work on red sandstone to its south.

Known for his bright ideas, Emperor Akbar brought into existence a unique specimen of grandeur and novelty in the form of Pachisi or Chaupar Durbar. Built by Kabur in 1572 AD, the Pachisi court served as a place of entertainment for the emperors. They used to play Pachisi, like some modern ludos and some people play chess. A game played with real tokens or pieces was played with a real person. The servants were dressed as emblems and the emperor’s demands were to be carried on. It seemed a game, but according to Akbar, it was his way of checking the well being of his people.

One of the most beautiful complexes in Fatehpur Sikri, it served as the emperor’s private place. It has space for holding separate meetings for the emperor, a Qutub Khana (own library), a small bathroom and a bedroom for the emperor. The bedroom had connections with Panch Mahal and Shahi Haram. Where the ground floor is quite simple, the first floor, the king’s private space is decorated with geometric and floral carvings. The murals on the wall depict Persian inscriptions as well as scenes from the court which have now faded away.

Lower Harmasara is located next to Jodha Bai’s palace and opposite Birbal’s palace. The reason behind its construction is unclear because for some historians it was a stables and for some it was a place of servants. The entire structure has floral paintings from both inside and outside. The pillars here are a mixture of Indian and Islamic designs.

Also known as Nakkar Khana, the musicians here announced the arrival of the emperor by beating the drum. The vision, plan and finally the result of the Emperor’s imagination are worthy of a humble tribute. The rich carvings on the sandstone walls highlight the extravagance of a talented work of art.

Q. What is the specialty of Fatehpur Sikri?

A – Built by Emperor Akbar during the second half of the 16th century, Fatehpur Sikri (city of victory) was the capital of the Mughal Empire for only some 10 years. The complex of monuments and temples in a similar architectural style includes the Jama Masjid, one of the largest mosques in India.

Q. How many steps are there in Fatehpur Sikri?

A – It is a 15-story building with a height of 58 meters and is the gateway to the city from the south. Tourists have to climb 42 stairs to reach the gate. There are two structures of three storeys on each side and both have three kiosks with large domes.

Q. How long does it take to go to Fatehpur Sikri?

A – About 1 hour, Generally, you should give a budget of about 1 hour according to the time it takes to visit Fatehpur Sikri.

Q. Why is Fatehpur Sikri famous?

A – Fatehpur Sikri is famous for some of the finest examples of Mughal, Hindu and Jain architecture. The structures reflect the blend of craftsmanship of Bengal and Gujarat. Locally quarried red sandstone, known as ‘Sikri sandstone’, has been used in the construction of all buildings.

A – For nearly 10 years, Fatehpur Sikri was the capital of the Mughal Empire, but was abandoned due to lack of sufficient water supply by its creator. This village, which has been inhabited for four centuries, has many architectural splendor.

Q. Is Fatehpur Sikri worth visiting?

A – Allow one more day in Agra and be ready to experience a terrifying abandoned royal Mughal capital of Fatehpur Sikri in Uttar Pradesh, India. So, is Fatehpur Sikri worth seeing? Yes, Fatehpur Sikri, located at a distance of about 60 KM from Agra, is worth seeing from the magnificent city of Agra.

Q. Which stone is used in the Buland Darwaza?

A – The southern entrance gate, the huge entrance gate Buland Darwaza (Vijay Darwaza; 1585), is one of the greatest architectural works of India. The monumental entrance gate has been constructed from red sandstone and has been carved with attractive designs.

Q. What are the three important features of Fatehpur Sikri?

A – Buland Darwaza or Gate of Victory, the main entrance to the palace at Fatehpur Sikri. Jama Masjid, a collective mosque and one of the first monuments built in the city. Salim Chishti’s Tomb, the burial site of Sufi Saint Sheikh Salim Chishti, who predicted the birth of Akbar’s successor.

A – The royal city at Fatehpur Sikri, 26 miles west of Agra in Uttar Pradesh, was built under the command of the great Mughal emperor Akbar. In honor of Saint Sheikh Salim Chishti, Akbar established a magnificent city on Sikri Ridge.

Q. How far is Fatehpur Sikri from Agra?

A – 36 Kms, Distance Between Agra to Fatehpur Sikri