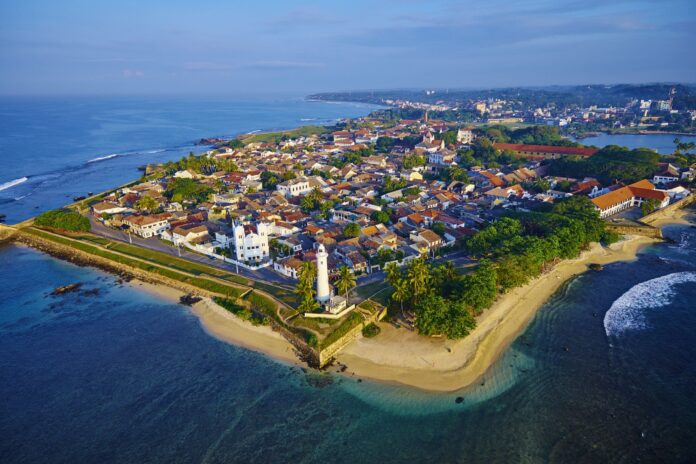 Galle, on the southwest coast of Sri Lanka, is where heritage has become hip. This atmospheric small city is one of the country’s eight UNESCO World Heritage Sites, notable for being the best example of a fortified city built by Europeans in South Asia (the Indian Subcontinent) and Southeast Asia. Its original structure was made by the Portuguese in the late 16th century after they landed in Sri Lanka by accident when their ship got blown off-course during a storm. It wasn’t long before the Dutch arrived though, in the early 17th century. They attacked the fort, drove the Portuguese out, claimed it for themselves, and vastly expanded the city.

Galle flourished as a trading port until the British took over in the late 18th century and made Colombo their capital. In recent years, the city has undergone a resurgence. Trendy boutiques, restaurants, and hotels now occupy the old colonial buildings that line its cobblestone streets. Galle is surprisingly unlike anywhere else in Sri Lanka. It’s an ideal place to relax in style. Here are the top things to there and if you have time, visit the lively beach party town of Unawatuna as well. It’s only a few miles away.

1. Go on a Heritage Walk Through Galle Fort

Galle Fort is undoubtedly the city’s prime attraction. It’s large, 130 acres to be precise, and the most enjoyable way of exploring it is to wander about on foot. In fact, this is one of the top things to do in Sri Lanka. For curious travelers who aren’t content with simply getting lost in the fort’s lanes, Galle Fort Walks conducts personalized guided tours that provide a fascinating insight into its history. There are two options to choose from Standard or Extended. The standard 90-minute tour covers all the architectural and cultural highlights, tailored to suit guest interests. The extended 150-minute tour goes into detail about colonization in Sri Lanka and its impact. End the day with a magical sunset walk along the fort’s ramparts.

History buffs can expand their knowledge by visiting the newly restored Maritime Archaeology Museum (not to be confused with the National Maritime Museum), which occupies a 1671 Dutch spice warehouse on Queen Street. It’s an attractive little museum, with four galleries that showcase the country’s extensive maritime history from as far back as the prehistoric age. Sri Lanka was in the middle of an international trade route, so it’s particularly interesting to see how various cultures were brought together. Exhibits include replicas of ships and relics from shipwrecks in the area.

3. Take a Look Inside the Dutch Reformed Church

This seemingly modest white church, near the entrance to the fort on Church Street, is not what you might expect inside. Its floor is covered with Dutch gravestones! Not only that, its walls are adorned with plaques commemorating the deaths of late Dutch commanders of Galle, and there are burial chambers in its garden. The Dutch Reformed Church belongs to the Protestant religion and was created in the Netherlands during the turbulent Protestant Reformation in the 16th century. The Dutch brought the religion with them to Sri Lanka and the church is one of the oldest Protestant places of worship in the country. Its foundations were laid in 1682 but construction wasn’t completed until 1755.

4. Stay in a Heritage Hotel

Many heritage buildings in Galle Fort have been transformed into chic boutique hotels where you can immerse yourself in the district’s new, hip energy and glorious past. There’s a string of them along Church Street. If money isn’t a concern, the grandest and most luxurious one is Aman Resort’s Amangalla, in what was the headquarters of Dutch commanders built-in 1684. Nearby, the Galle Fort Hotel is more affordable than the Amangalla but has just as much character. It was originally a Dutch mansion and warehouse. Its restoration has been recognized by UNESCO, which gave it an Asia Pacific Heritage Award of Distinction. Next to the Galle Fort Hotel and a little less pricey is the chic Fort Bazaar Hotel, located in a 17th-century merchant townhouse. The Fort Printers, just down the road at the intersection of Pedlar Street, is popular as well. Then, on the ramparts by the sea, there is The Bartizan, a new addition to the heritage hotel scene that is already buzzing. The welcoming and homely Beach Haven Guest House on Lighthouse Street is perennially popular for those on a budget.

The Old Dutch Hospital adjoining Galle Fort has been converted into a classy dining and shopping precinct. It’s a great place to commence your culinary voyage in Galle and is also a standout spot to see the sunset as the top floor has sea views. A Minute by Tuk Tuk is a quirky favorite serving contemporary Sri Lankan food with a deck overlooking the water. Elegant Sugar Bistro and Wine Bar have an eclectic menu (try the iconic crab kottu) and an extensive range of fine wines. If you’re only in the mood for a drink head to Tequila Mocking for delicious cocktails.

Must Read – Buddhist Sites In Sri Lanka For A Spiritual Experience

Elsewhere in Galle Fort, Fortaleza Bar and Restaurant is one of the most happening places, on Church Cross Street. For authentic local food, try Lucky Fort Restaurant on Prarawa Street, Coconut Sambol on Church Street, and Hoppa Galle Fort on Pedlar Street. Drop by landmark Pedlar’s Inn, in an old British Post Office, for a street cafe vibe.

Make sure you have plenty of space in your suitcase because Galle Fort is filled with irresistible things to buy! There are several upmarket tea stores in the Old Dutch Hospital, with Withered Leaves, in particular, standing out. Orchid House Boutique has reasonably-priced jewelry, tea, and handicrafts (most items are designed by the owner) and Jo Jo on Pedlar Street sells quality gems and jewelry. Barefoot, at the intersection of Pedlar and Church streets, is famous for bright textiles and homeware. Karma Collection on Leyn Baan Street has a gorgeous range of goodies including fashion, art, and accessories. Olanda Furniture, in a Dutch colonial house on Leyn Baan Street, specializes in antiques. The Old Railway is worth venturing to outside Galle Fort for bespoke clothes, crafts, and jewelry. It also has a cafe.

The Exotic Roots art gallery on Lighthouse Street is run by a mother-daughter trio of artists. Their works are available for purchase and include stunning paintings, prints, and pottery. The gallery is also stocked with a collection of other tastefully-designed products and there’s a cafe, performance space, an apartment as well. Sithuvili Gallery on Leyn Baan Street is a treasure trove of antiques, traditional temple art, paintings, handcrafted masks, wooden puppets, and many other unique items.

Even if you can’t afford to stay at the opulent Amangalla Hotel, you don’t have to miss out completely. Sumptuous traditional afternoon tea is served there in the afternoon from 3 p.m. It features the finest Ceylon teas accompanied by freshly baked scones, cakes, and sandwiches. There’s an option for champagne as well if you’re feeling indulgent! Or you can simply go with hot scones. Do book ahead during the high season. If you’d prefer somewhere less costly but still high on charm, head to the National Tea Room on Lighthouse Street.

Love Sri Lankan food and want to learn how to make it? A cooking class is a perfect way to get started. One of the most popular ones is conducted by the family that runs Lucky Fort Restaurant (so you know the food will be good). Chandu and his mother will show you how to prepare an assortment of curries in their home. Alternatively, Galle Food Walks offers a trip to Wasanthi’s kitchen in Unawatuna, where you’ll get to cook an authentic meal and have lunch afterward. Washi is renowned for her culinary skills, passed down from generation to generation. If you don’t want to cook, it’s possible to just have a meal in her home with her intriguing family.

Step outside laid-back Galle Fort and you’ll definitely know you’re still in Sri Lanka. There are vibrant action-filled local markets to explore, for those who are up for an adventure. They provide excellent opportunities for photography too. On Main Street, you’ll find the 300-year-old Dutch Market, where fresh produce is sold. There are spice shops further along the street. Early risers can also catch the fish market alongside the beach, which comes to life with a cacophony of activity after the fishing boats return with the day’s catch.

Frequently Asked Questions About Places To Visit In Galle

Q. What is Galle famous for?

A. Galle is famous for its Portuguese architectural buildings and the Galle Fort which is a world heritage site and the many amazing places to visit in Galle.

Q. How far is Galle from Unawatuna?

A. Galle is just 5.8 kilometers away from Unawatuna and it will hardly take you 20 minutes to travel from one place to the other.

Q. How far is Galle from Bentota?

A. Galle is 72 kilometers away from Bentota and you can take a train, taxi or a bus to commute between the two.

Q. How far is Hikkaduwa from Galle?

A. Hikkaduwa is 21 kilometers away from Galle and it will take you around 40-45 minutes to commute between the two.

Q. Is Sri Lanka a safe place to visit?

A. Yes, absolutely! Sri Lanka is a safe place to visit. However, it is advised that you must be cautious and vigilant enough and take some precautions while you are there.