Uzbekistan: reasons to include in your “must visit” list 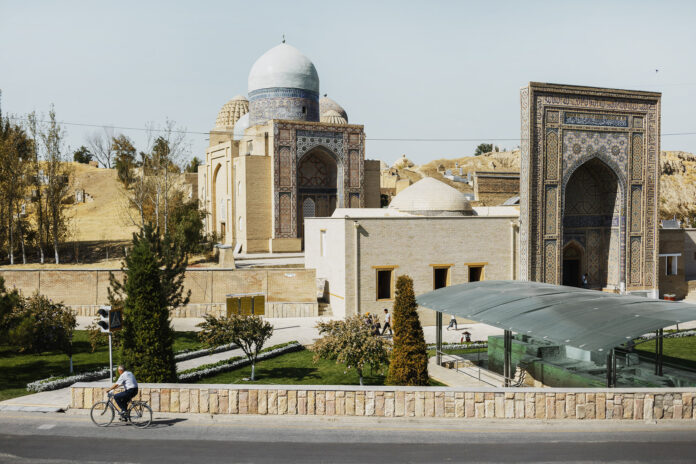 Uzbekistan is the most original and authentic country. There is no similar state either in Central Asia or in the whole world. The reason lies in history: unlike their Asian neighbors, the ancestors of the Uzbeks are not nomads, but sedentary peoples. They have been building their cities for centuries, protecting their lives and cultural values.

Do you remember school history lessons, where they talked about camel caravans passing through the deserts and cities full of gold and wealth that met on their way? This is just about Uzbekistan. The Great Silk Road, which, by the way, was 12 thousand km long, passed through the whole country.

But this is in the past. Now Uzbekistan does not play such an important role in world trade, although without Uzbek watermelons, peaches, melons, apples, carrots, and cherries, we probably would have disappeared.

Why should you go on a trip around this country, and what, besides eating fruit, will you do there? We tell you which cities to see, what dishes to try, how to get around and where to live in this country.

1.  Fall in love with local cuisine

Uzbek cuisine is a topic for a separate article. All dishes are based on meat (lamb, horse meat, beef), dough, vegetables, and spices. Each region has its own peculiarities of cooking, so it is very difficult not to turn your trip to Uzbekistan into an exclusively gastronomic tour.

Most likely, there will not be a single dish after which you do not want to ask for more. Here’s what you should definitely try:

The king of the whole table is pilaf. Behind him – in the “Plov Center”, which is in any city of Uzbekistan. Ask the locals – they will tell you the way. The main thing is to plan your time: pilaf is cooked early in the morning and served until 2-3 pm, so come to 12 and grab the largest portion.

2.   Fill all memory cards with pictures of minarets, mosques, and colorful paintings

Just imagine: many cities of Uzbekistan were founded before our era! Of course, the buildings of that prescription have not survived, but the XIII-XIV century AD is complete. Here are the main cities to include in your itinerary.

Samarkand in the dreams and ideas of many is a real oriental fairy tale. And for good reason! Go to see the famous Registan Square with three madrasahs – the center of the entire ancient East, the Bibi Khanym mosque, where you feel very tiny, the Shahi Zinda mausoleum complex, in the blue kaleidoscope of which you can get lost, and Gur-Emir – the mausoleum of the commander Amir Timur, who is revered in Uzbekistan as a national hero. Admission to each of the attractions is paid, moreover, for foreigners, it is much more expensive than for locals. But still quite inexpensive: from $ 1 to $ 5.

Bukhara. This city is smaller and quieter than Samarkand. When you arrive in Bukhara, it will seem to you that you are transported into the past: the whole city is one continuous story, from which sometimes you even get tired. The most ancient Fortress Ark and   Lyabi-Khauz (a square with a madrasah and a small pond in the center) are full of tourists from all over the world. You can save yourself in numerous shops with local dishes, clothes, and musical instruments. Go there not for shopping, but for the sake of master classes: craftsmen will teach you how to make pottery, cook the perfect pilaf or sew a skullcap for only $ 10-15.

Khiva is the most remote city. To get to it, you will have to travel through the Kyzyl Kum desert by taxi from Bukhara or by train. Better the first option – more convenient, at least. Khiva is considered a paradise for photographers. The old city – Ichan-Kala – has been preserved since the 16th century. Now, this city is an open-air museum, inside which locals live so organically. And yet, only in this city you can climb to the top of the minaret and look at the city from above. The views are definitely worth walking two hundred steps.

3.   Be surprised at prices and currencies

Anyone can become a millionaire in Uzbekistan! It is enough to exchange 120 dollars. The national currency is the Uzbek sum, and the banknotes are very small. The largest banknote is 50,000 sum, which you rarely come across. Therefore, get ready to take a package or even a whole bag of cash from the exchange office.

The exchange process itself is a real adventure. Of course, you can go to the bank and try to exchange there, but you will definitely not like the rate. The “black market” of currency exchange is flourishing in Uzbekistan, it operates openly and no one is hiding anything. On the contrary, the police always walk alongside the money changers and keep order. To exchange currency, go to the bazaar (for example, in Tashkent – Chorsu bazaar (the largest bazaar in Central Asia, by the way). There, among the crowd, you will hear who to approach.

4.   Buy everything in souvenir shops and local markets

You won’t find such a variety of really cool things anywhere. Painted earthenware, blades, and knives with carved handles, leather bags, skins of sheep – broadtail, local carpets of all colors and shades – your eyes will dazzle, and low prices will allow you to give free rein to all your desires. Pay special attention to clothes with national Uzbek embroidery – suzane and fabric called ikat in saturated colors, which only craftswomen from Asia can do. Buy in the markets or include a carpet factory in your itinerary, for example, in Samarkand – Samarkand Bukhara Silk Carpets… There they will not only show all their products, but they will also lead them through the production, introduce them to those who are working on creating this beauty, tell the whole history of their factory, and even put them at the machine and show the basics of their craft! And it’s all free.

Hospitality is a separate attraction of the country. Russian-speaking tourists are the exception rather than the rule in this region (surprisingly). Americans, Chinese, Japanese, Spaniards can be found in every hotel, but for the locals, they are not of particular interest: few people know a foreign language. But everyone knows Russian. Therefore, they will be happy to discuss the latest news with you, find out everything about your adventure, give advice, help, give a lift, feed, and so on. As many facts and stories about everyday life, how many they are ready to tell, you will not learn from the Internet. Don’t miss your chance!

You can move around the country in several ways: trains, buses, taxis, and hitchhiking. The latter, by the way, is very developed, finding a passing car is a matter of a couple of minutes. True, if you are a girl and travel alone, say that you are married.

If you prefer more traditional travel methods, then you won’t spend a lot of money on the trip: prices start at $ 4 for a train ticket in economy class and from $ 1 for a bus ride. Trains are many times more comfortable and faster, moreover, high-speed trains ” Afrosiab ” run between Tashkent, Samarkand, and Bukhara, which will take you to your destination in 2-4 hours.

Taxi is the most mobile way to travel. In Uzbekistan, at every exit from the city, there is a certain patch where taxi drivers recruit people into their cars and take them over long distances. When you find yourself in this place, the drivers surround you from all sides. Your tactic maybe like this: tell everyone that you don’t need anything, step aside and find the most relaxed driver. The main thing is to agree on the cost, departure time, and currency even before the trip. Otherwise, you will agree on 1000, but you cannot prove dollars or sums.

To find a roof over your head, use everyone’s favorite Booking. You will find a lot of options: from Soviet shacks to stylish boutique hotels in the national style. There are also hostels, and no worse than in Europe: with huge breakfasts, soft beds, and night gatherings. Here are some proven options: Laliopa in Khiva, Rumi in Bukhara, Topchan Hostel in Tashkent.

You won’t need a visa to visit Uzbekistan – only your passport. But this does not mean that you can relax at the border. At the entrance, you need to fill out two customs declarations with an inventory of all valuables, documents, and cash. Bring everything in there: pennies, leftover euros, dollars, earrings on your ears, memory cards from a camera, your favorite phone. You give one declaration to the border guard, the second one you keep until you leave the country as proof that all the exported values ​​are yours and nobody else’s.

Another feature: the need for registration. It must be received within three days after entry, not later! They register at each hotel, and you also need to save their confirmation before leaving Uzbekistan.