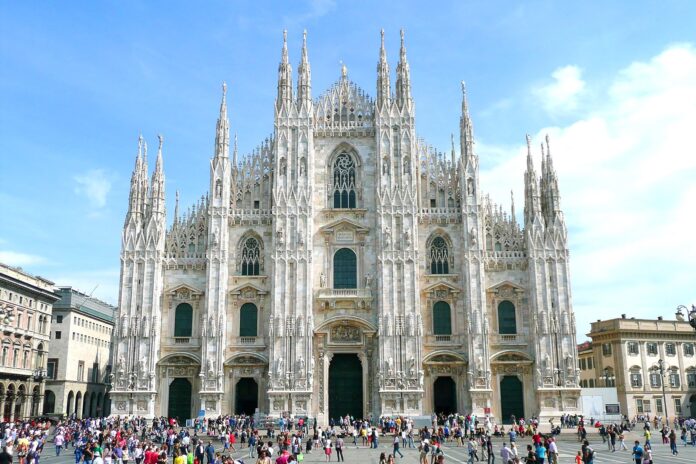 How many times in your life have you heard that Milan is just the Duomo, the Vittorio Emanuele gallery and shopping? However, for the Italians themselves, the financial capital of the country has retained the chic of the economic miracle of the middle of the last century and is known to everyone for its design bureaus, passion for aperitifos and elegant sciure – as Italians themselves call luxurious ladies from the center of Milan. Read about where to go to educate yourself, where to dine and what to watch in order to become a milanese, read our alternative guide.

Brera, with its Pinakothek, the Academy of Fine Arts and the Fernanda Café, named after Fernanda Wittgens, the first woman director of the gallery, is considered a bohemian and artist district, and is the main attraction for locals and travelers alike. However, many other museums with equally valuable collections can be found throughout Milan.

Founded in 1618 by Cardinal Federico Borromeo, today the Pinakothek brings together such masterpieces as Leonardo da Vinci’s Portrait of a Musician, Caravaggio’s Fruit Basket, Raphael’s School of Athens and Titian’s Adoration of the Magi. The museum is subordinate to the church, and the policy of the leadership is reminiscent of the TV series “Young Pope” – the less available you are, the more interest in you. Therefore, there are queues of philanthropists and patrons of art, but there are no tourists at all, which allows you to calmly enjoy a visit to the oldest museum in Italy.

The pool in the museum – why not? In the 20th century, Nedda Necki, one of the heiresses of a family that made a fortune in the production of sewing machines, together with her husband Angelo Campiglio decided to build a house for themselves, which was created by the then fashionable architect Piero Portaluppi. The two-storey villa, combining elements of Italian modernism, a classic mansion of the late 19th century, Art Deco and even Art Nouveau, was built in accordance with all the technological innovations of the time. There was the first private heated pool in Milan, the first garage for four cars, and a heated conservatory with large wall-to-wall windows. The Villa Necchi Campiglio was famous throughout the city, besides, the family loved to throw noisy parties, which, by the way, can still be visited today on Halloween or Christmas.

House of Catellani and the vineyard of Leonardo da Vinci

The Renaissance mansion near the famous church of Santa Maria delle Grazie once belonged to the Atellani family of diplomats at the court of the Sforza dukes of Milan. In 1919, Senator Ettore Conti became the new owner of the building and invited the same Piero Portaluppi to convert it into his residence. Most of all, the mansion is remembered for the Zodiac Hall, in which carts of the planets are depicted on the vault, and on the walls – a map of Italy, a wind rose and allegories of the seasons. The hall later became a landmark for the architect’s work. When visiting the Atellani house, do not forget to look into the inner paradise courtyard, where the vineyards of Leonardo da Vinci are located.

One of the most important design museums in the world, attracting thousands of visitors every year and recounting the centuries-old history of Italian design through audio guides in the form of retro telephones. It is housed in the modernist Palazzo dell’Arte building in Sempione Park and is famous not only for its unique exhibition, but also for its large bookstore, bar and two restaurants, including the Terrazza Triennale, which offer panoramic views of the city.

Not far from the Triennale is the studio of one of the founders of Italian design Achille Castiglioni – these are large spacious studio halls where the master’s ideas and projects were born. Here are collected all the drawings, projects, photographs and other objects that illustrate 60 years of Castiglioni’s work, thanks to which the concept of “modern design” appeared in the world.

Many people learn about Italian art of the last century in the Museo del Novecento, but much more comfortable and interesting is the mansion of the collectors Antonio Boschi and Marida Di Stefano, built by Portaluppi. Over 300 works by Italian artists can be seen here, including Giorgio de Chirico, Mario Sironi and Lucio Fontana. All in all, the family’s collection includes about 2,000 works. Evenings of live music are often held in the mansion – in continuation of those music salons for which Bosky himself was famous.

Milan is considered the Italian capital not only of design, but also of contemporary art – with its abundance of private galleries and major venues such as Fondazione Prada and Hangar Bicocca.

Mecca of contemporary art and one of the largest private galleries in Europe. Fondazione Prada is a real art quarter located on the territory of a former wine and cognac factory. The total area of ​​the center reaches 20 thousand square meters. Everything is beautiful here: the architecture of Rem Koolhaas, unique exhibition projects, the bookstore, the Luce bar designed by Wes Anderson and the Torre restaurant, where you can not only admire the works of Jeff Koons, Goshka Matsuga and John Wesley, but also look at Milan from the panoramic terrace.

When you open Google Maps and understand how long it will take to get to the former industrial area of ​​Bicocca, do not allow yourself to hesitate even for a second. Once there was a Pirelli factory, but over time, the company decided to transform the area, because contemporary art “better than any other language is able to convey the value of diversity, the ability to interpret the future and seek excellence.” This is why the entrance to Hangar Bicocca, which consists of three factory buildings from the 1920s and 1960s, is absolutely free. And of course, one cannot ignore the large-scale and impressive artistic compositions of contemporary world-famous artists – Anselm Kiefer and Fausto Melotti.

The real religion of Milan

Aperitivo is exactly what Milanese truly believe. It’s a mindset, a philosophy, and the best way to spend an evening. “Aperitivo” is when you order only a glass of prosecco, and they bring you cheeses, prosciutto, nuts and other snacks. Aperitivo Center – Navigli is one of the most colorful districts of Milan with two canals, old houses, lights, music and dozens of different bars, including Zog, Mag Cafè, La Prosciutteria, Ugo Cocktail Bar and Apollo Club.

Not far from Navigli is another quarter of Tortona – the design area. It also houses the Armani / Silos exhibition space, the Base cultural space and the MUDEC museum. Almost every home on Via Tortona is a new bar, cafe or restaurant. Places to visit include Belle Donne Bistrot, God Save the Food, The Botanical Club, Al Fresco, Esco Bistro Mediterraneo.

The beauty of Milan is that you can always go to another city for a day. An hour’s drive – and you are already at the lake, mountains, in an old villa or in Turin.

Many immediately rush to Como, but much more interesting and more beautiful is Lago Maggiore – the largest lake in Italy, bordering Switzerland. The views are as beautiful as those on Lago Como, but only on Maggiore can you see the gardens and palaces of Charles III Borromeo. The main pearl is Isola Bella, an island on which Borromeo, as a gift to his wife, created a unique garden on stones, which is a cascade of ten terraces with hydrangeas of various colors and peacocks. There is also a palace, impressive with gray underground grottoes, decorated in the style of the “underwater kingdom”. On Isola Madre, the largest island of Borromeo, is another family palace and a huge botanical garden with white peacocks, golden pheasants and parrots.

Absolutely not popular among travelers, but known to every Milanese as a villa of delight, the magical Villa Panza of the 18th century houses one of the most significant private collections of contemporary art. More than 150 works by American artists, inspired by the theme of light and color, harmoniously complement the historic spaces of the house. As you walk through the 33,000 square meter villa and park, be sure to check out the colorful stained glass greenhouse designed by the architect Piero Portaluppi.