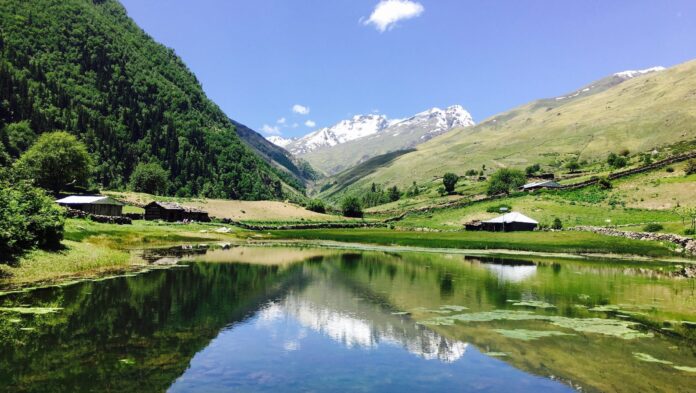 Of all the valleys in Himachal’s district of Kinnaur, it is perhaps the Sangla Valley – also called the Baspa Valley after the river that flows through it – that is perhaps the most beautiful. (Older guide books and travelogues refer to this curving valley as the ‘Baspa Valley’ after the river; more recent ones call it the ‘Sangla Valley’ after the main village). It is a blaze of saffron fields, thick woods of deodar (Himalayan cedar) and waters of clear snow melt that set out to create a combination of fire and ice calmed by deep green forests. Unlike most other major streams of the area that flow north to south, the river Baspa flows north-west to meet the churning torrents of the river Satluj at Karcham. Along the sides of the lower hills, rise snow clad mountains and thick forests of Himalayan cedar. These woods are garnished with spruce, alder and the unusual birch – the ‘bhojpatra’ tree whose peeling bark served as parchment for ancient Indian texts. Chocolate-box pictures of villages, orchards and fields fill the valley floor.

The ninety-five kilometer long valley gets off to a fairly unimpressive start – debris from the hydel project, a fast flowing stream and then, a road up a narrow defile. It is along this stretch that one sees the determination of the chil pine that grows out of sheer rock faces – and whose cones yield the tasty kernel, the rare ‘dry fruit’, the chilgoza. And after this corridor, like curtains tossed aside to reveal the setting of a grand stage, the valley bursts open at Kupa. From this point on, every turn and every angle reveals a valley that is strikingly beautiful. As if to savor all this, the waters of the Baspa also slow down and the little river that moments ago showed the visage of a savage mountain stream, now turns calm and welcoming.

The village of Kamru lies at a height above the valley floor and is a kilometer or so from Sangla village. Here stands its famous tower-like fort. This wood and stone structure was the original seat of the rulers of the erstwhile princely state of Bushair – they later moved to Sarahan and then to Rampur which lie downstream of the Satluj. With a population of about a thousand people, Kamru is a dense cluster of houses and is surrounded by fields and orchards.

The village has the main market of the valley where essentials are available. Apart from its size and the fact that some of the hotels and rest houses are based there, Sangla village on its own belies the true beauty of the area. Surrounded by houses, and placed in the center of the village is the old temple of Bering Nag. The temple is an attractive wood and stone structure that houses the principal image of the deity.

Chitkul is the last inhabited village in the valley. The drive to this is along a road that lies close to the river bank. Chitkul is a village where the wood and stone structures seem to have been inspired by a old-fashioned fairy tale. This also has three temples dedicated to the goddess Mathi. The main temple is believed to be around six hundred years old.

The village lies along a hill slope and has narrow well marked paths – with a little marker at every little crossing. Along its slopes and level stretches, Batseri also displays some of the unusual traditional architectural methods of the area. The small temple of Badri Narayan is an exemplary piece of craftsmanship with superb carvings along its panels and finely worked slate for the roof. An interesting little piece of sacred architecture is the large prayer wheel housed in a little shelter high up the village; it is turned by stream waters.

A chocolate-box hamlet, Raksham is set before a mass of dark rock and moraine and is at an altitude of 3,115 meters above sea level. The place-name, ‘Raksham’ is supposedly a derivative from ‘rak’, a rock and ‘sham’, bridge – local lore has it that the Baspa’s waters corroded a stone dam leaving a span over the top – and thereby created a natural bridge at the spot. The village has some charming wood and stone houses and rests at the end of what can best be described as glen with thick forests.

In 1965, on the left bank of the river Baspa, a small trout farm was established and this now covers an area of an acre and a half. Located near the Hubra stream, whose waters finally flow into the Baspa, Brown trout (salmo trutta) fingerlings are raised in the farm and released into the Baspa.

The Sangla Valley has some of the finest easy hikes that can be done in the western Himalaya – and some grueling trek trails too. There are what an experienced trekker will call ‘easy walks’ like the ever popular Batseri to Raksham walk that takes a couple of hours and passes through woods of Himalayan cedar (deodar) and birch, or the somewhat more demanding Raksham to Chitkul hike.

Like the rest of Kinnaur, there are no urban centres in the valley – and like most other parts of the administrative district, the people of the valley practice an unusual mix of Trans Himalayan (Vajrayana) Buddhism and Hinduism. Interestingly, for what was till very recently quite the ‘back of the beyond’ with limited educational and other facilities, an unusual distinction of the valley is the large number of people it has sent into the Indian civil service and police. Between Kupa and Chitkul – roughly halfway up the valley – the area is fairly populous and cultivated. Human habitation ends at Chitkul and from then on to the lofty Chung Saghgo Pass it is a trek route through raw rock and snow, which leads to the hills of Uttarakhand. The Sangla Valley is a leisure destination that takes some getting to, has a touch of adventure and nature quite sublime. There is some splendid folk architecture, long and short hikes and treks – and in season, trout fishing along the Baspa.

Q. How do I reach Sangla Valley?

Q. Where should I stay, Sangla or Chitkul?

A – Sangla is better when it comes to stay options, Below are the best Stay options –
Osia Shambhu Lodge.
Stepart – Shruti Guest House.
Regency, Goddess of Dormico.
Kailas view.

A – The road between Karcham and Chitkul is still open. The route remains closed during the winter season as snow completely blocks the road and opens until early April.

Q. What is the best time to visit Kinnaur?

A – Month: April to June. You can enjoy the pleasant weather during this season, which is why it is considered the best time to visit Kinnaur. It is peak season so there will be really heavy tourist traffic. The temperature of this region varies from 8 ° C to 30 ° C in summer.

A – It is terrifyingly narrow, pretty steep and very dangerous, and probably more challenging than the famous Leh-Manali highway.

Q. Is it worth visiting Chitkul?

A – The last village in India – Chitkul is definitely the next place in 2021! You must have visited many hill stations in your life but one place that remains special is Chitkul. It is one of the most scenic places you will ever see. Hidden in the lap of the Himalayas, Chitkul is called the last village of India.

A – Sangla is a small town in northeast Himachal Pradesh, situated on the banks of the Baspa River. The valley is referred to by both names – Sangla Valley as well as BSP Valley

Q. Sangla valley is famous for?

A – Sangla, situated on the right bank of the BSP river, is a populous village, famous for its high fertile soil, which is 2621 meters above sea level and 17 km from Karcham.

A – The best months to visit are March, April, May, June, September and December. The climate remains pleasant during these kites, providing tourists with the best holiday experience. Sangla summers are moderately hot. Temperatures range from 8 ° C – 30 ° C in the months of March to May.