KALPA – A SCENIC VILLAGE IN THE HIMALAYAS 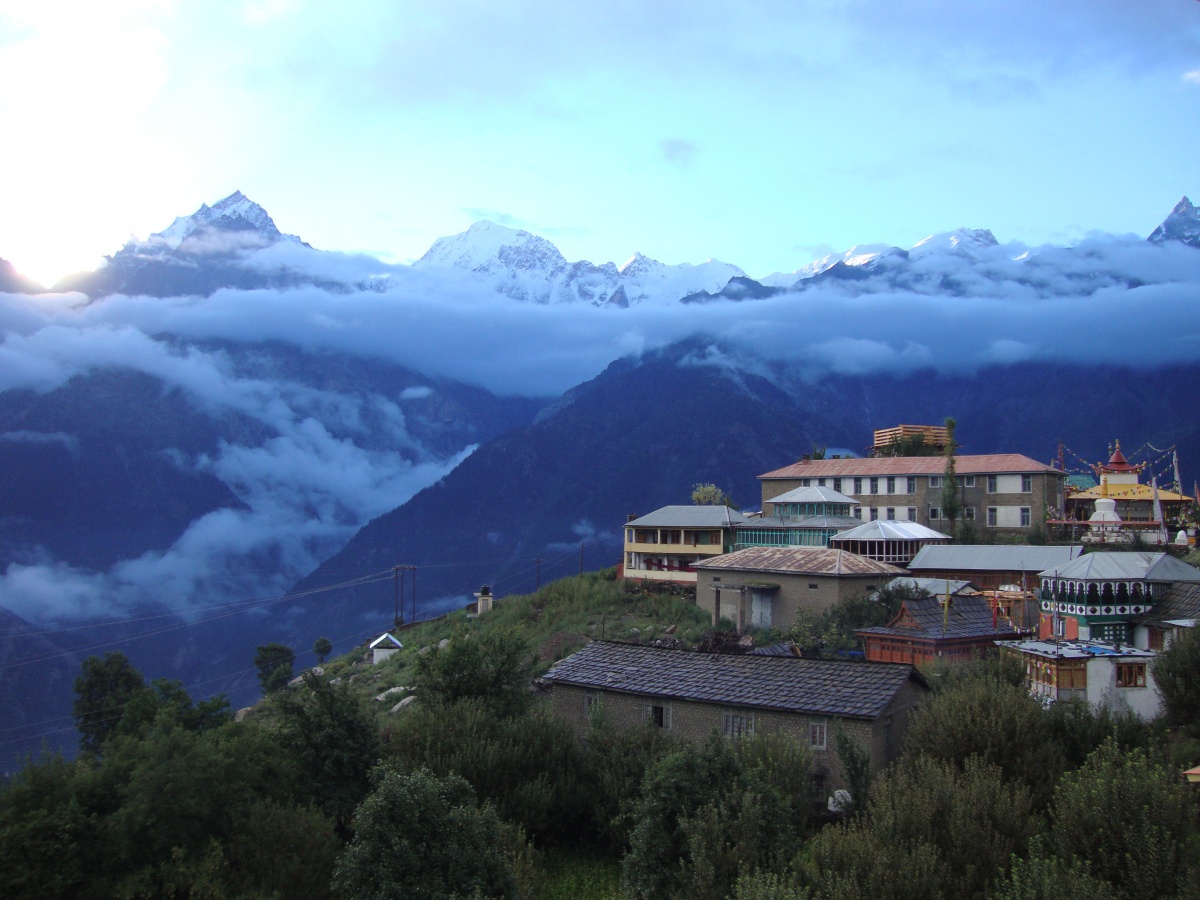 From the Hindustan-Tibet Road (NH 22), the turn-off for Kalpa is at Powari and seven kilometers at the end of a steadily climbing side-road is Recong Peo, the district headquarters of Kinnaur. Half an hour’s drive from Recong Peo, takes you to Kalpa – which was once known as Chini. This still has a touch of the old settlement and its traditional architecture. The Narayan-Nagini temple is an exemplary example of local craftsmanship. The goddess Shuwang Chandika is held in great reverence and there is another temple dedicated to Bhairon.

There are a couple of Buddhist monasteries at Kalpa – including the Hu-Bu-Lan-Kar gompa said to have been founded by the great translator, Rinchensang-PO (950 – 1055 CE). Kalpa has what may well be one of the finest views in the world. This faces the majesty of Jorkanden (6473 meters) and the Kinner Kailash mountain (6050 meters). The latter is regarded as one of the mythical homes of Lord Shiva and by aside, is a seventy-nine-foot high rock formation that resembles a ‘shivalinga’ that changes color as the day passes and is visible to the bare eye on a clear day. The ‘parikrama’, circumambulation around the base of the mountain is a seven to eight-day trek. Also visible on the stretch is the peak of Raldang (5,499 meters) – where the spirits of the dead people of Kinnaur are regarded to live.

As a destination, Kalpa offers a window to a way of life that is fast changing with the end of geographical isolation. This is the base for several excursions in Kinnaur. It can also act as the starting point for a trip to Spiti.

Top Places to Visit around Kalpa

Recong Peo is the administrative headquarters of the district of Kinnaur. For a long time, these were at Kalpa and were shifted lower down the same hill a couple of decades ago. The turnoff from the Hindustan-Tibet Road is at Powari and seven kilometers after a steady ascent, one comes to Recong Peo. Most of this small town has been built fairly recently. One has to pass through this on the way to Kalpa and the distance between the two is thirteen kilometers. As from Kalpa, the view from Recong Peo is of the majestic peak of Kinner Kailash, regarded as one of the mythical homes of Lord Shiva and the seventy-nine foot high free-standing rock by its side that resembles a ‘shivalinga’ and changes color as the day passes

For all practical purposes, Kanam (Kanum) is a complete monastic village of Buddhists, though its heart is the Lundup Ganfel gompa, the ‘Temple of easy religious merit’ which is located on the top of the village. The temple may have been rebuilt on the old plinth but the structures adjoining this are of considerable antiquity. This mix of the old and not so old is apparent all over the village; for example, the structure that houses the stucco statue of Manjusri Manjughosa is of relatively recent construction, but the image itself is much older.

The monastery is of considerable significance and dates back to the time of Rinchensang-PO, the ‘Great Translator’. This is located at the base of the Nessang valley – and is on one of the old trade routes that led to Tibet. Kanam is accessed by a side road from Spillo and is sixty kilometers from Kalpa at an altitude of 2699 meters above sea level. The village has seven large and small temples that date back several centuries and numerous reliquaries. The word ‘Kanam’ is believed to come from the first letter, ‘Ka’ of the sacred texts, the Kangyur and ‘nam’, or place – and thus, a place of sacred books’.

The village of Moorang is one the most beautifully located ones in the district of Kinnaur and lies on the left bank of the river Satluj near the confluence with the Tirang. The river Satluj has played a considerable role in shaping the history and culture of Kinnaur. This river is sixteen hundred kilometers long and is a tributary of the Indus and has its source in a lake known as the ‘Rakshasa Taal’, literally ‘the lake of demons’. On the western highlands of Tibet, some three hundred kilometers east of the Indian border, its waters are separated by a bare two kilometers from its famous twin, the fabled tarn of Mansarovar – which is also referred to as Ma-fa-mu and Mapan Lake. At a height of just over 4,500 meters, these lakes rest in the Nagari prefecture of China. Apart from the west, which faces the river, Moorang is surrounded by high mountains. The path to the village goes through apricot orchards and with the backdrop of the high hills, the river valley, and traditional architecture, this creates a remarkable visual treat.

For good reason, it is often said that Nako is the most attractive village in Kinnaur – it is majestically sited and is a place where time seems to have stood still for centuries. Its hundred or so stone houses are built around a little lake and depending on where you stand, the visual perspective is such, that at times, many of them seem to be half-buried under the soil. The lake is fringed with trees of willow and poplar and every bit of flat land has been made arable.

Nako is at an altitude of 3,662 meters above sea level and at a distance of a hundred and twenty-eight kilometers from Kalpa; the village is a couple of kilometers above the Hangrang valley road. The village deity is called Deodum. The main monastic complex of Nako lies towards the north of the village and has four temples. The site is believed to have been the site of a large Drugpa monastery and was founded by Lotsaba Rinchen Zangpo, during the reign of King Yeshe-Od of the western Tibetan kingdom of Guge. The complex is called the Locha lha-Khang. On the southwest are the remains of some monks’ chambers and a few chortens.

An Insight into Kalpa Tourism

Kalpa is a picturesque little village in the Kinnaur district of Himachal Pradesh. Surrounded by the towering mountains and glittering peaks of the Kinnaur Kailash range and boasting an unperturbed environment, Kalpa is a paradisiacal destination for nature lovers. With its Buddhist Monastery and Hindu temple, this humble abode offers you the perfect opportunity to seek your spiritual enlightenment in the lap of the Himalayas. In Kalpa, treat your eyes to the different sights of the Mount Kailash, Mt. Raldang, and Jorkanden and if you are lucky, you may get to witness the holy Shivling, situated atop the sacred mountain, and the visual spectacle of its changing colours throughout the day.

A small offbeat destination that it is, Kalpa doesn’t boast many tourist attractions. There is constructed in the traditional Tibetan Pagoda Architectural style, the ancient and revered Narayan Nagini Temple in Kalpa. This temple is considered as the perfect example of Kinnauri Art and Craftsmanship. Then at the close proximity to the temple is the Hu-Bu-Lan-Kar Monastery. A place of unparalleled positivity, this monastery is the perfect refuge for those seeking spiritual enlightenment in this Himalayan village.

There are a number of places to see and treks to do around Kalpa like attraction of the Chakka Peak, situated at a height of around 4572 meters. One has to trek through valleys and gleaming water channels to reach here. A short trek from Kalpa, adorned with stunning vistas and verdant green forests of pine trees, will take you to the nearby Roghi Village, a sightseeing spot near Kalpa. An identical village to Kalpa, this hidden gem of Roghi allures tourists with its tranquillity and serenity. A short walk from the village of Kalpa through the beautiful apple orchards and scenic roads will take you to the Suicide Point.

Boasting completely vertical slopes and dangerous trenches, the Suicide Point will surely get your adrenaline pumping. Another popular tourist attraction near Kalpa is the ancient village of Kothi. This village is located at a distance of around 2 km from Kalpa. With its famous temple of the Goddess Chandika Devi situated against the backdrop of the majestic Himalayan landscape, Kothi is an architectural delight. The Sapni Fort in the Sapni village situated in the vicinity of Kalpa is a sightseeing spot known for its exquisite architecture and exotic locale. A charming place for history buffs, the Sapni Fort is a famous historical site near Kalpa.